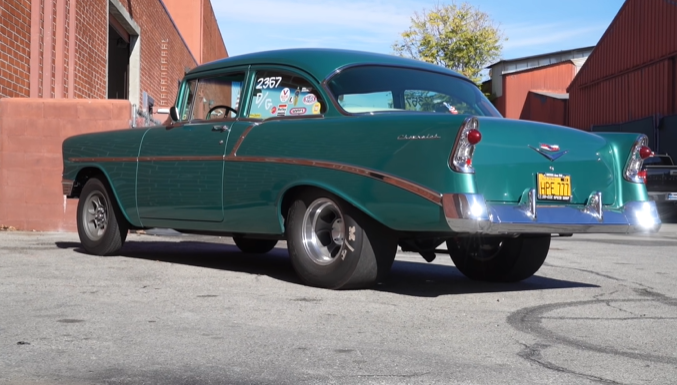 I met Dennis McCarthy 15 years ago when Freiburger and I were running CarJunkieTV and Freiburger’s F-Bomb Camaro was the hero car in the latest Fast and Furious movie. Because they had to build a bunch of “copies” of the car, along with a bunch of specialty stunt cars, we got to be around the builds and even got to be on set for some filming. Hell, Daphne and I drove the F-Bomb to the premier at Universal and parked it on the platform for the afterparty before walking the red carpet. The entire experience, from start to finish, was awesome. Along the way I met Scott Risley, one of the lead builders for Dennis and we’ve done lots of cool stuff over the year’s since. And when we took raced Daphne’s Bel Air wagon, Ethyl, on the Fastest Car tv show it was only after getting some TV required safety updates over at Dennis’ place.

When you build the cars for all the cool movies, it stands to reason that you probably have some cool cars of your own and Dennis certainly does. But the video below is about his 1956 Chevy which I love at all kinds of levels. First off, I have a ’56 as well, and this one is probably one of the most menacing and fun looking ’56s you are going to find anywhere. It’s a total street bruiser with gasser attitude to spare. Watch the video below and let us know what you think. I know I’d park it in my garage!

Dennis McCarthy from Vehicle Effects specializes in picture cars and is well known for building the cars for the Fast & Furious franchise, this is the car Dennis chose to build for himself since it reminds him of his drag racing days in high school so sit back and enjoy the ride.

Dakar 2022 Video Highlights: Stage 9 Extended Highlights Are Right Here And You Don't Want To Miss This! Over 800 Tremec TKX Transmissions In Stock And Ready To Ship! Just 3 More Days Of BACONSHIFT! Save $250 And Get Free Bacon. This Is Our Favorite Sale Of The Year!