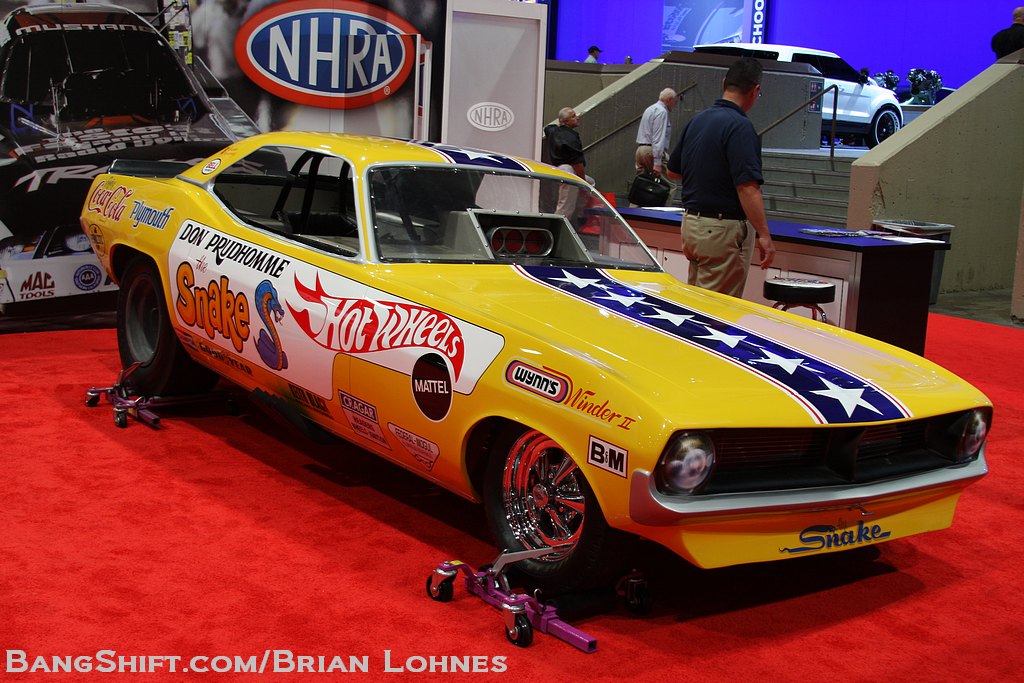 Of all the cars and trucks that filled the nearly one million square foot Las Vegas Convention Center last week during SEMA, the most historically significant race cars is this one. Don Prudhomme’s 1970 ‘Cuda Funny Car is the actual car he raced against Tom McEwen during the famous “Snake and Mongoose” days when the pair were backed by Hot Wheels and became household names in the early to mid 1970s. This isn’t a recreation, this thing is the restored real deal from that period. It stands as not only a great reminder of the “Snake and Mongoose” but also as a fantastic look into what a Funny Car actually was in the early 1970s. This car was located in the NHRA display during the show and what we believe is a recreation of the Mongoose car was parked on display in the lobby. You’ll be seeing lots of both cars in the coming weeks and months as publicity for the Snake and Mongoose movie ramps up.

Scroll down to learn about this famous car through photos we shot at the 2012 SEMA show and captions! 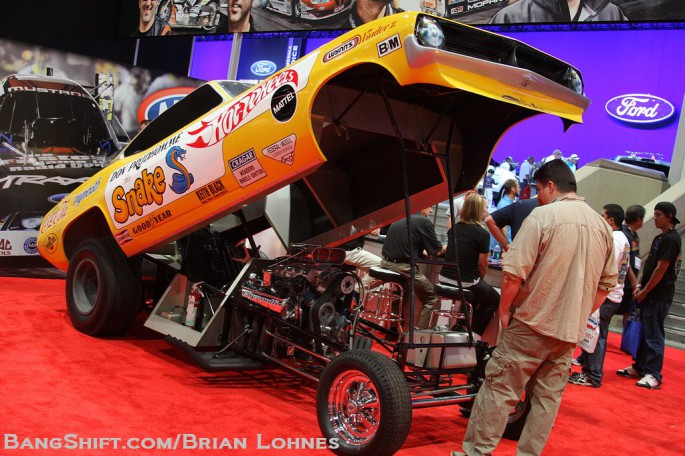 Here’s the car with the body up and the original Exhibition Engineering chassis exposed. Ron Scrima was the builder and the machine looks like many cars of the day. The wide, basic chassis uses two rails on both sides, a tube front axle with coil over shocks and a front mounted fuel tank. 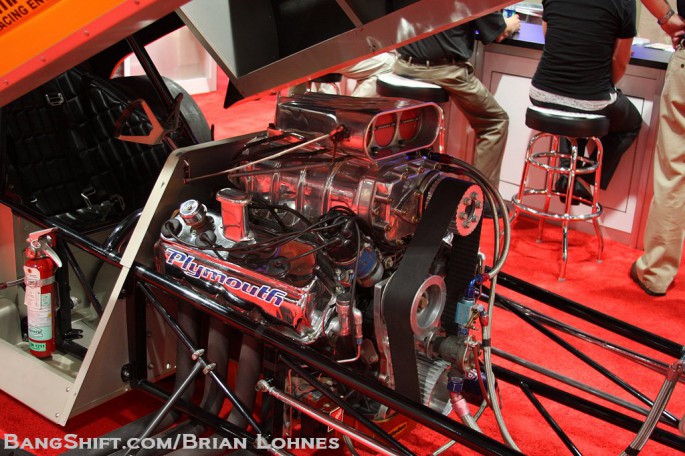 The 426ci Hemi ran on 95% nitro during the era that it was pounding the ground in anger. One of the quickest cars of the era it made about 2500hp. 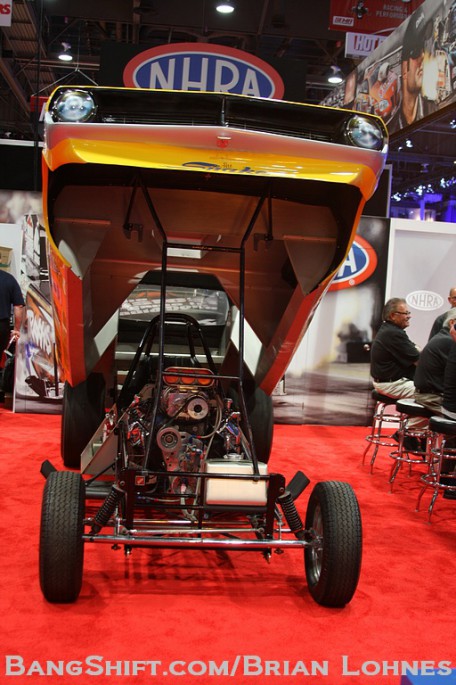 As compared to modern floppers, this thing is quaint. Minus computers, modern safety enhancements, and all of the tube that today’s cars require, the ‘Cuda weighs about 1500lbs, far lighter than today’s machines. 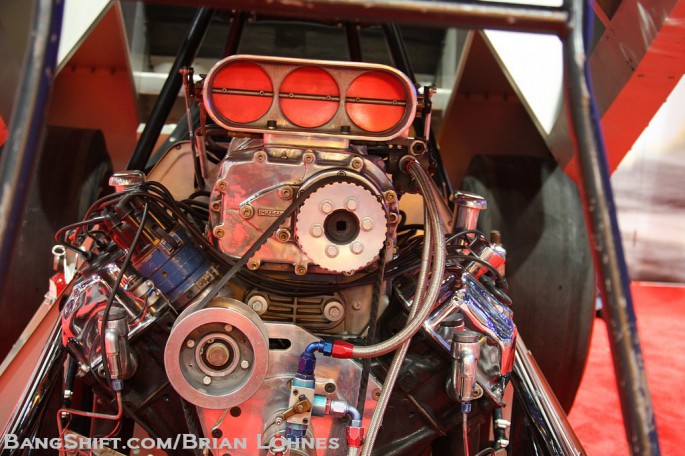 Whether it be 1970 or today, there’s nothing quite like a hairy Hemi with a blower on top of it. 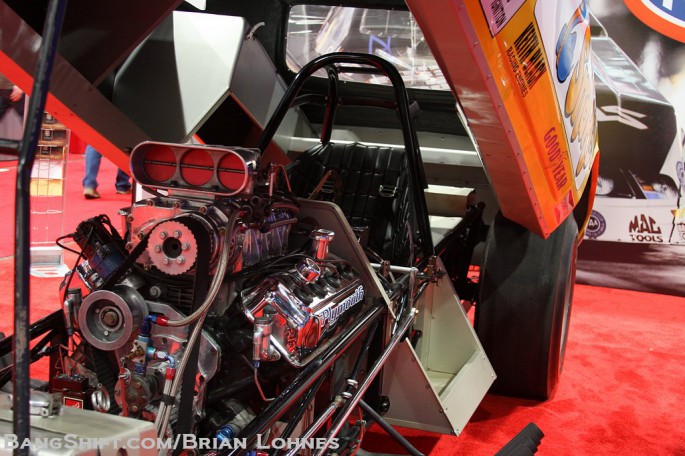 The width of the cage is one of the more startling aspects of this old car. Today’s cars have far more form fitting cages which isolate drivers far better in the event of a wreck. Yes, Prudhomme was strapped into the center of that cage, but he had lots of room to flop around! 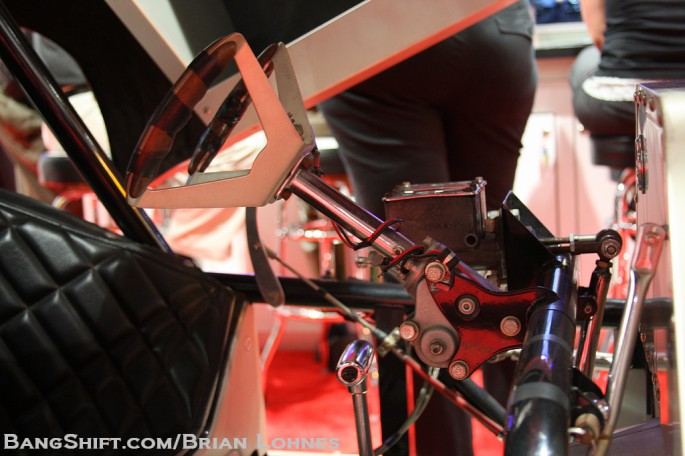 The butterfly wheel, a stock looking Chrysler shift handle, a couple of gauges and handles for the fuel shut off and parachutes comprise the driver’s area of the car. Interestingly, no tachometer is to be found. Prudhomme has often said that they drove the cars by ear and feel back then. They didn’t have time to look and the lighting was so bad at most tracks they couldn’t have seen it at night anyway. 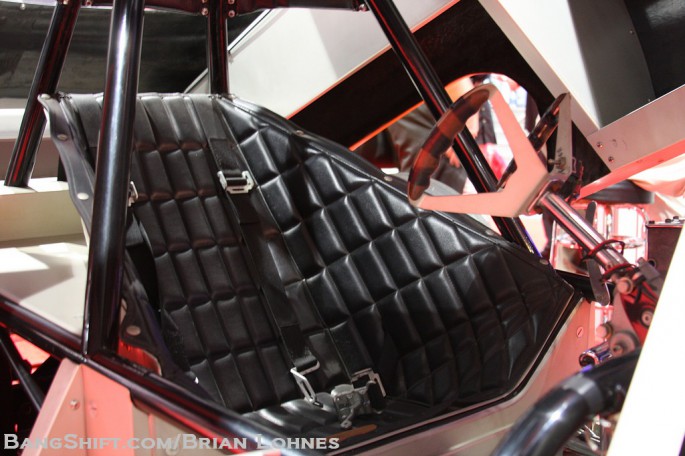 One more shot of the seat. Imagine showing up to a race and trying to get this one past NHRA tech today! 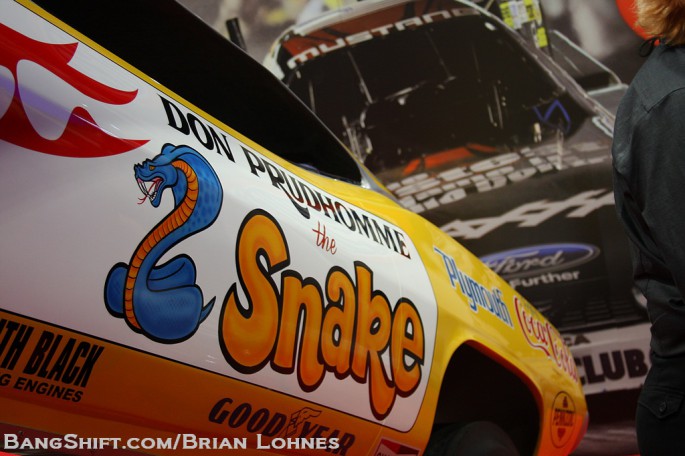 No decals here! The car was and is all paint. Kenny Youngblood worked his magic on the Cuda. 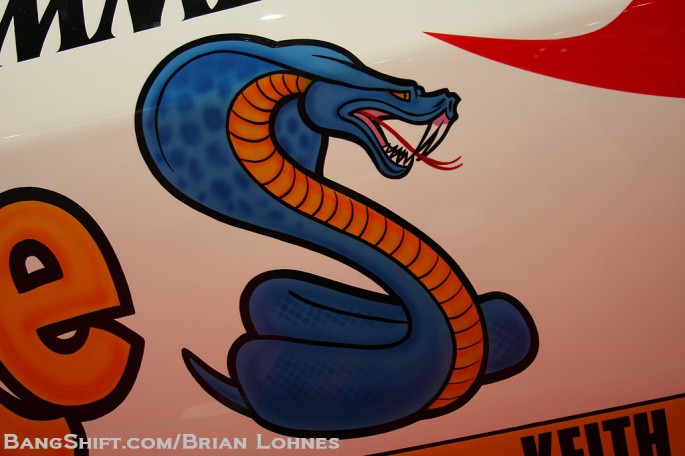 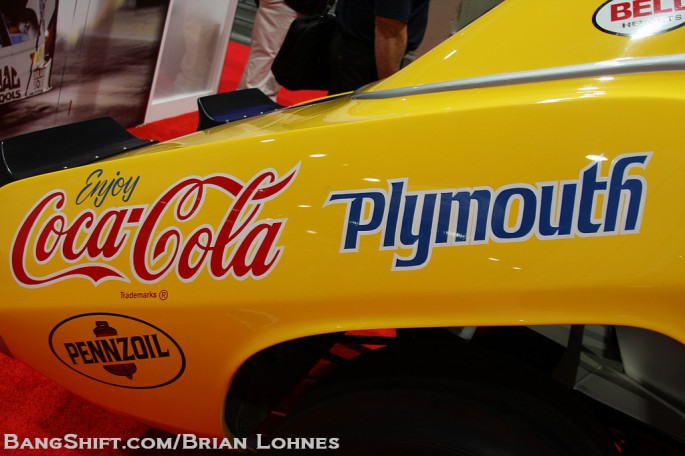 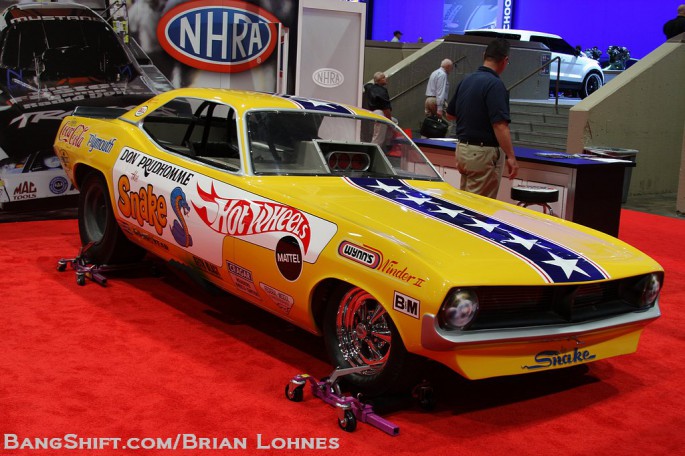 We caught the car with the body down as it was being readied to roll out for the night. Two things we love here. The first is that it looks like a ‘Cuda and the second is that this is long before aero became elevated to a fetish in funny car. This ‘Cuda looks right as rain. 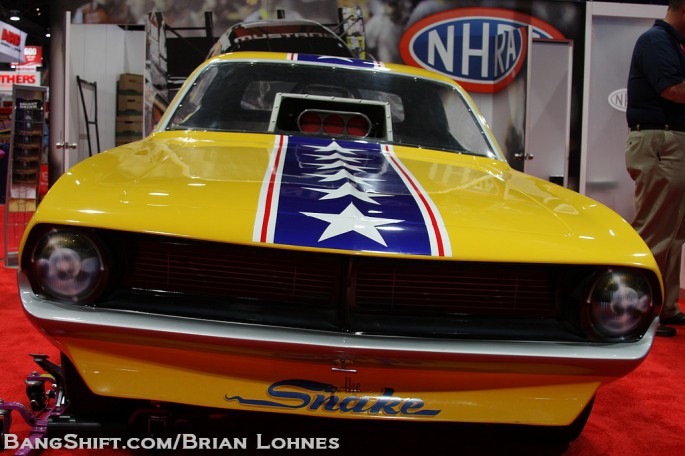 One of the last things a bug would see before being sucked into the injector! 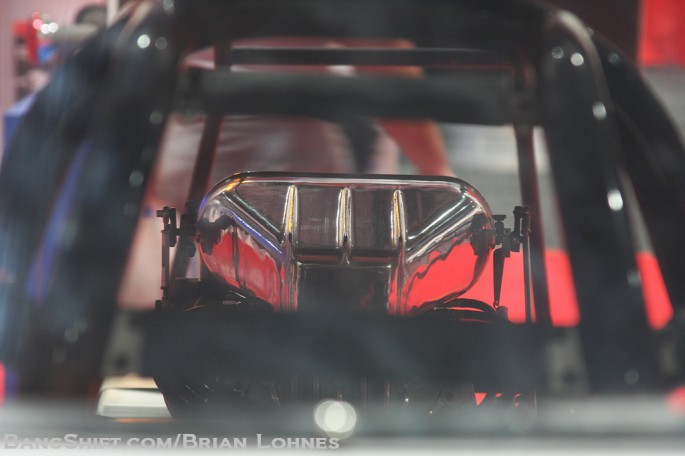 The only thing that sucks about this car is that we cannot drive it!