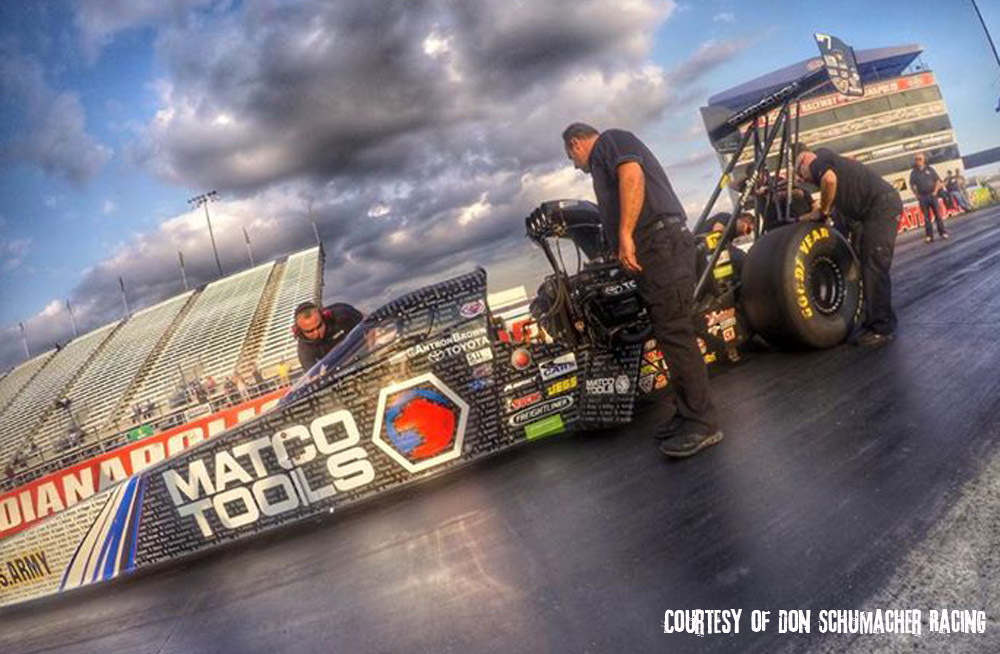 Teams utilized the two-day open test to prepare for the world’s most prestigious drag race, which will be held Sept. 2-7 at the famed motorsports facility that sits just west of downtown Indianapolis. The tradition-rich U.S. Nationals, which will also feature the lucrative Traxxas Nitro Shootout for Top Fuel and Funny Car will be televised by ESPN and ESPN2 with expanded coverage during Labor Day weekend. 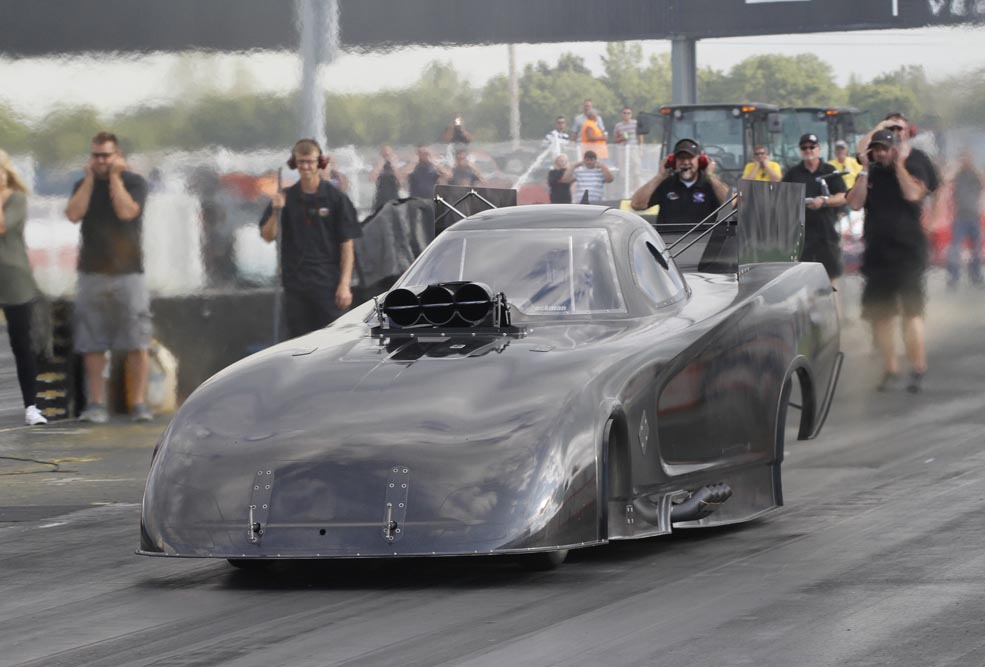 Beckman, who recently set the Funny Car national record at 3.901 seconds in Brainerd, Minn. after posting a string of jaw-dropping 3.90-second runs during the Western Swing, dialed it in once again with a performance of 3.918 seconds at 325.22 mph in his test-mode, all-black Dodge Charger to show his rivals he’s going to be tough to handle next weekend.

Beckman said he and his team, led by crew chief Jimmy Prock, used the test session to make sure their spare parts are up for the challenge that is the Big Go.

“Well, I think a lot of people that came here, came here for a practice session,” Beckman said. “That means lap the stuff that you think you’re going to run, massage your tune-up, and that’s fine. There’s nothing wrong with that. We do that sometimes, but we’ve treated this like a true test session. First, we think the conditions are going to be a lot hotter for the actual race than they are right now and secondly, we want to cycle back through all of our back-up parts – our second supercharger, our third supercharger, our back-up injector. Early this year, in the semis, we popped our injector in half in the shutdown area and you want to know that when you bolt your spare on it’s going to behave in a predictable fashion. We’ve tried some different clutch disks because we’re going to start running out of certain ones pretty soon here and we just made a run with the new Goodyear tire that will eventually be our replacement tire. So, we’ve treated it exactly as a test session and I’m very pleased with the results.” 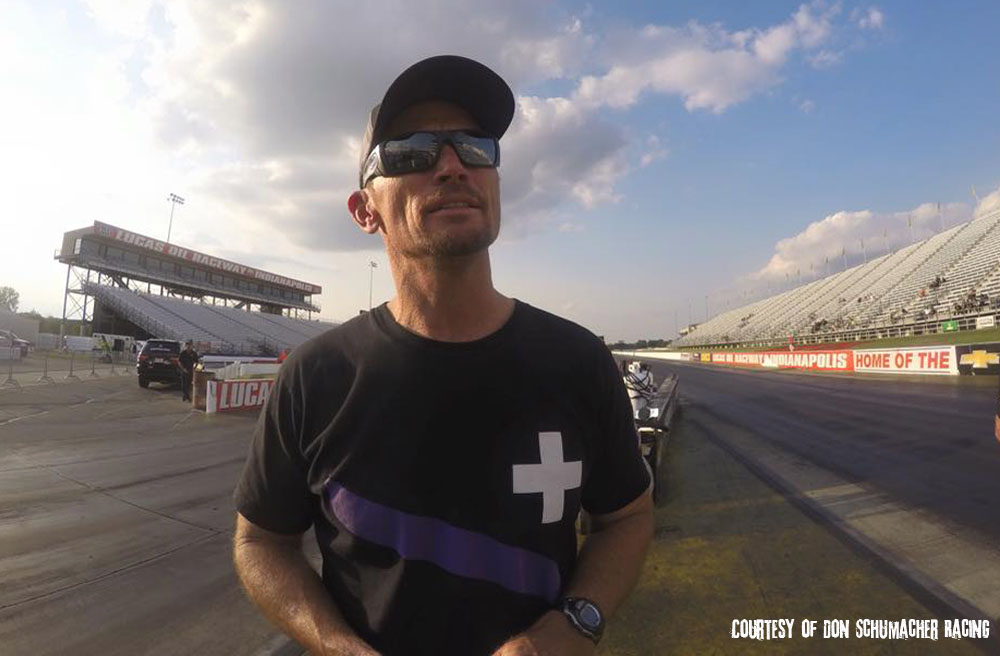 Beckman, who won the 2012 world championship and is one of the hottest drivers in the category currently with five victories in six final round appearances, is looking to earn his first U.S. Nationals victory. As a longtime student of the sport of drag racing, he says he’s heard from many drivers that Indy is just another drag race, but he says when you closely examine it, you quickly realize why this particular race stands out from the crowd.

“Well it’s interesting because when you come and there isn’t the U.S. Nationals, it literally is just another dragstrip,” Beckman said. “There is paved pit parking, there’s grass, there’s an acceleration strip and a shutdown strip. There’s newer (tracks), there’s bigger ones out there, but when the cars start loading in for the U.S. Nationals you begin to realize it’s special. Then as a driver, it’s a marathon. It’s an extra day above every other race out there. Not that we need any extra incentive at Indy, but they also threw the Traxxas Shootout in here, so you have a race within a race, and now, for the first time in three decades I think, we’re back to points-and-a-half for elimination rounds. You could’ve put that trophy up there and I’d still want it as bad, but there’s a lot of different reasons that make this race so special.” 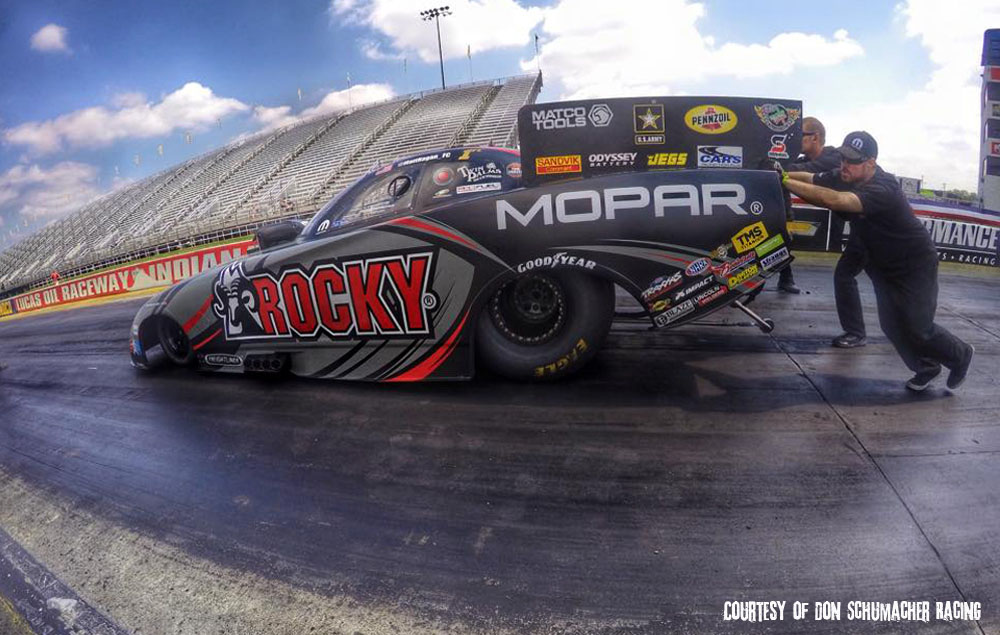 Defending world champ Matt Hagan also had one of the quickest cars in testing, powering his Dodge Charger to a Thursday-best of 3.947 at 319.45.  He said he and crew chief Dickie Venables are trying to focus on finding a tune-up for the anticipated warmer conditions that next weekend may bring.

“Obviously, we’re all pushing hard on these cool racetracks and good conditions,” Hagan said. “Looks like most of everybody has learned how to run hard in the mid- to low-90’s. Really, what we’re trying to do is run like that when the sun’s out and you have a 110- or 115-degree racetrack. It’s tough to run those kind of numbers. That’s where it’s going to separate everybody, being able to do that in the heat. We’re really trying hard to get some of that accomplished and done today. All in all, I can’t complain. The car, ever since Brainerd, has been running really strong. Dickie (Venables) seems to have a really good handle on it right now.” 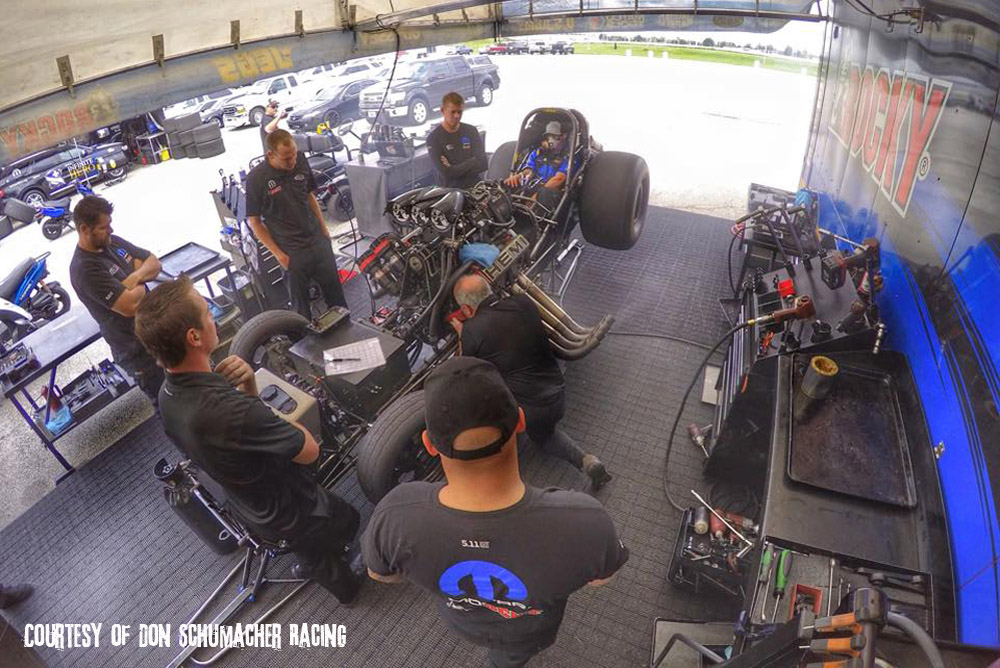 Hagan, who trails Beckman by 50 points entering Indy, would like to take advantage of Indy’s point-and-a-half system and swing back around him and try to grab the top seed in the ultra-competitive class for the Countdown playoffs. 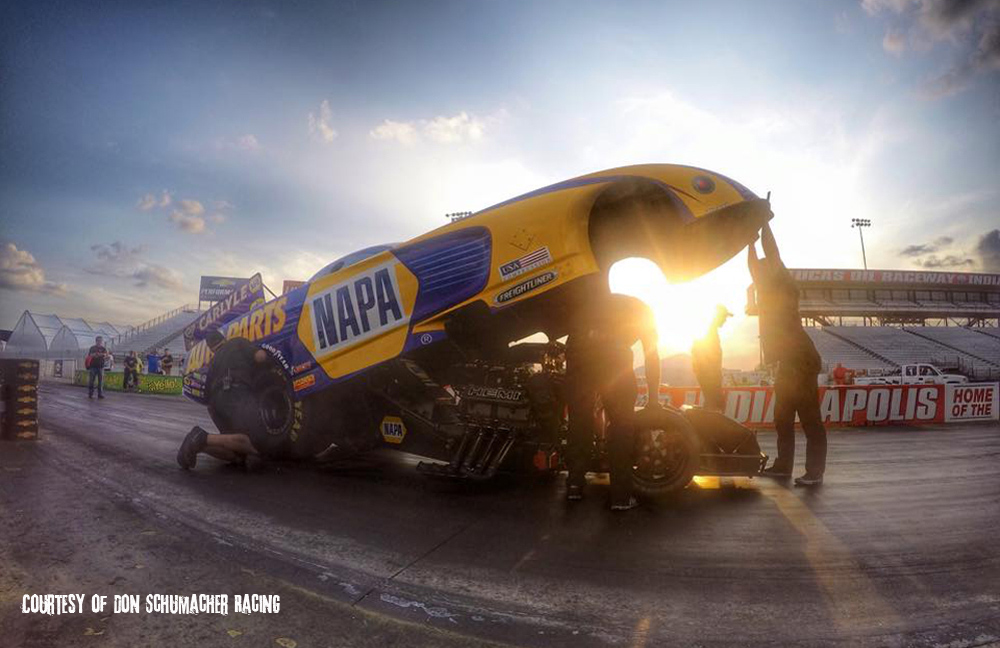 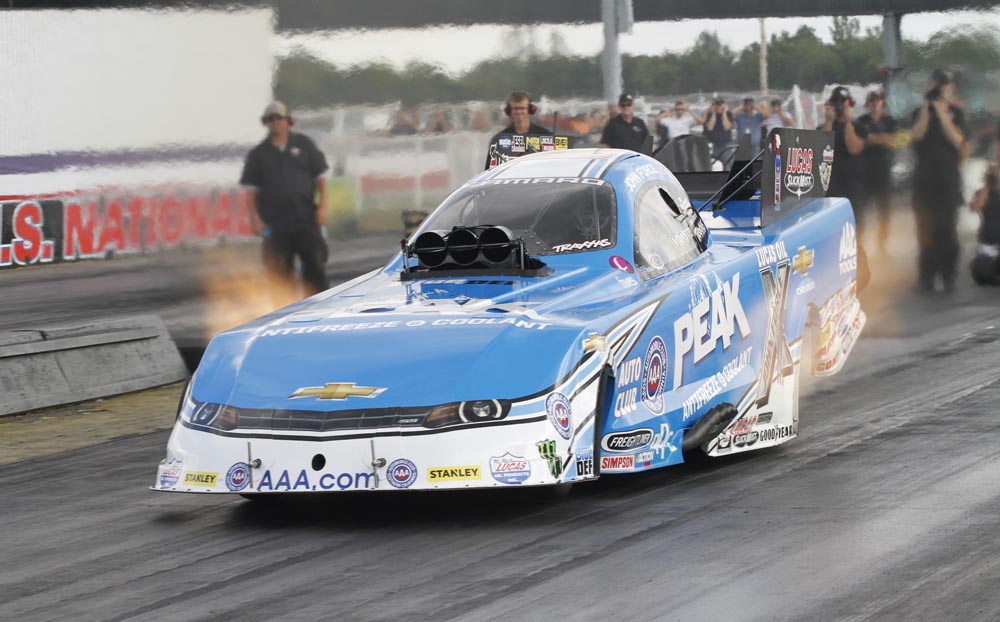 Courtney Force, who is trying to work her way into the top 10 with a strong showing at Indy, posted a 3.981 at 323.19 in her Traxxas Camaro. Her main rival, 10th place Alexis DeJoria, who is the defending Funny Car winner of the U.S. Nationals, posted a 4.094 at 283.55 in her Patron X O Cafe Incendio Toyota Camry. 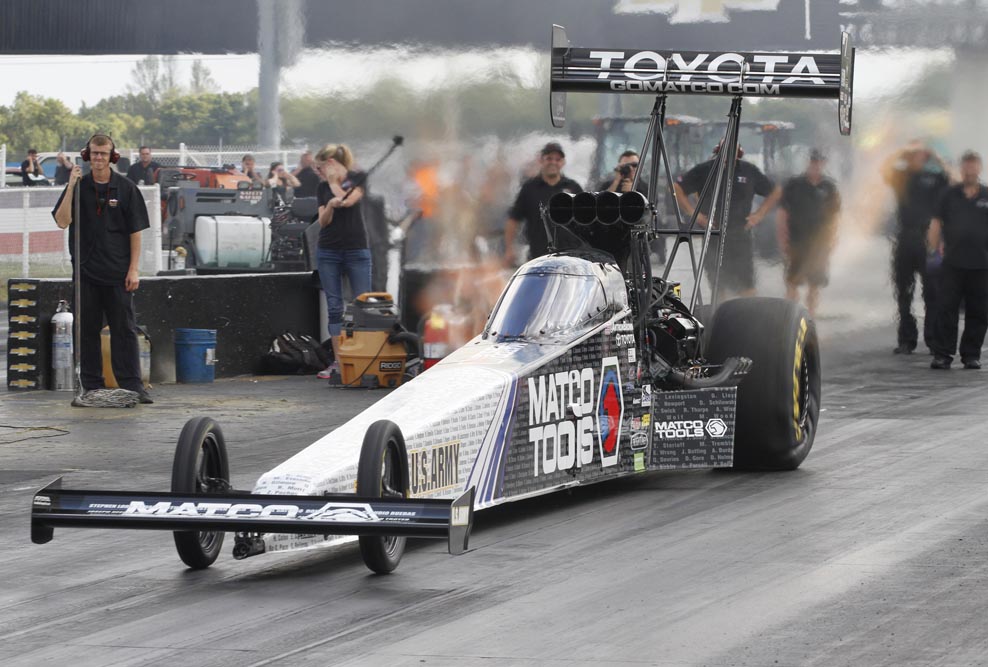 Antron Brown (above) led the Top Fuel contingent with an impressive 3.707 at 325.22 in his Matco Tools dragster, while Brainerd runner-up Brittany Force posted a 3.720 at 310.27 in her Monster Energy dragster. Spencer Massey pushed his Red Fuel dragster to a best of 3.744 at 323.50 and former Indy winner Shawn Langdon clocked a 3.770 at 313.80 in his Knuckle Sandwich / Toyota dragster.

Below is a listing of each Top Fuel and Funny Car competitor’s best performance from Thursday’s testing: 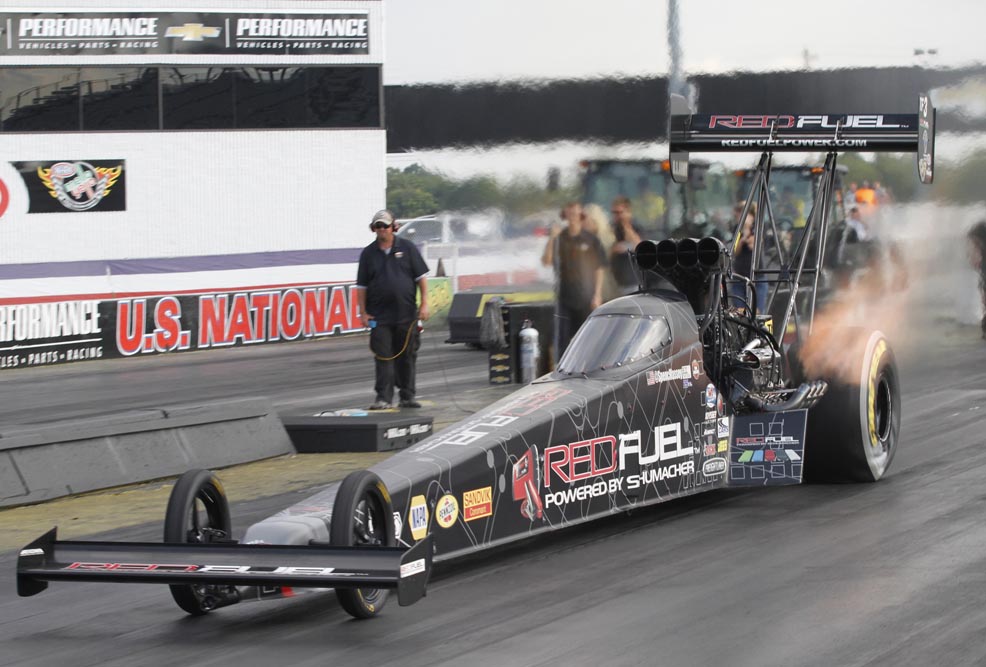 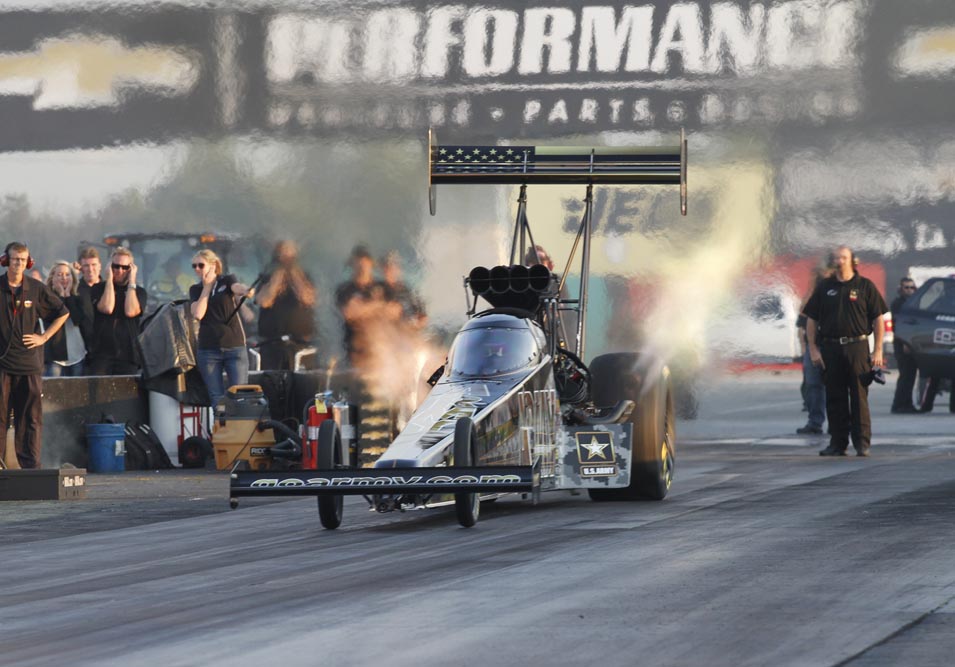 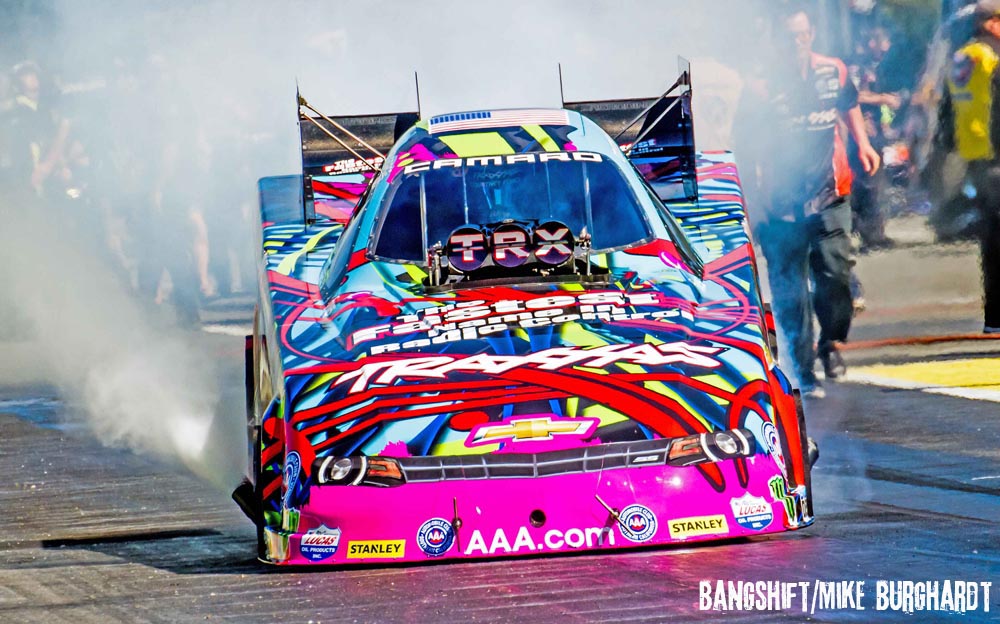 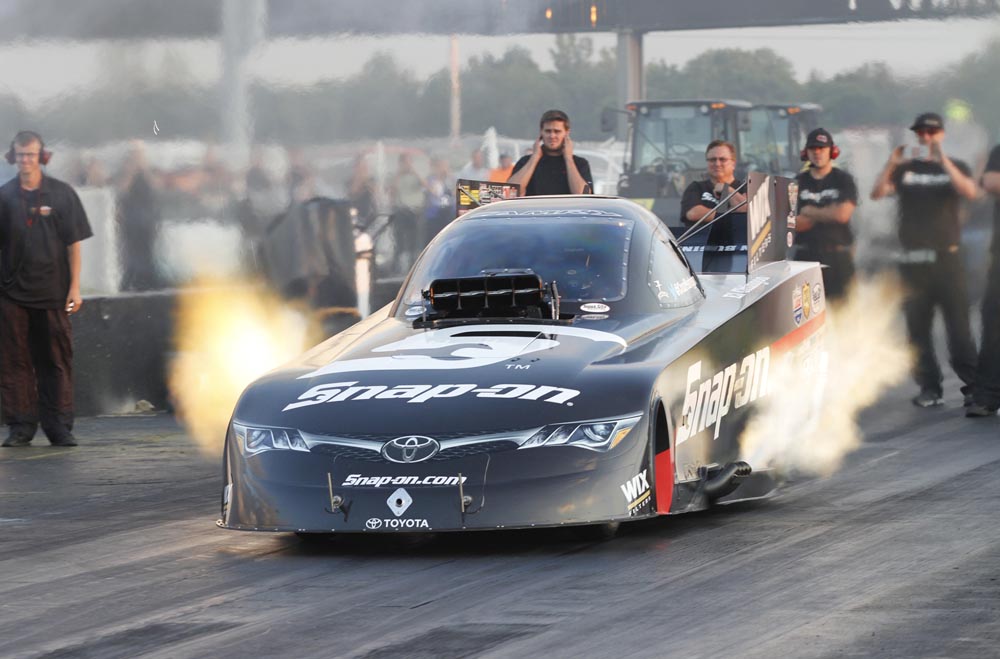 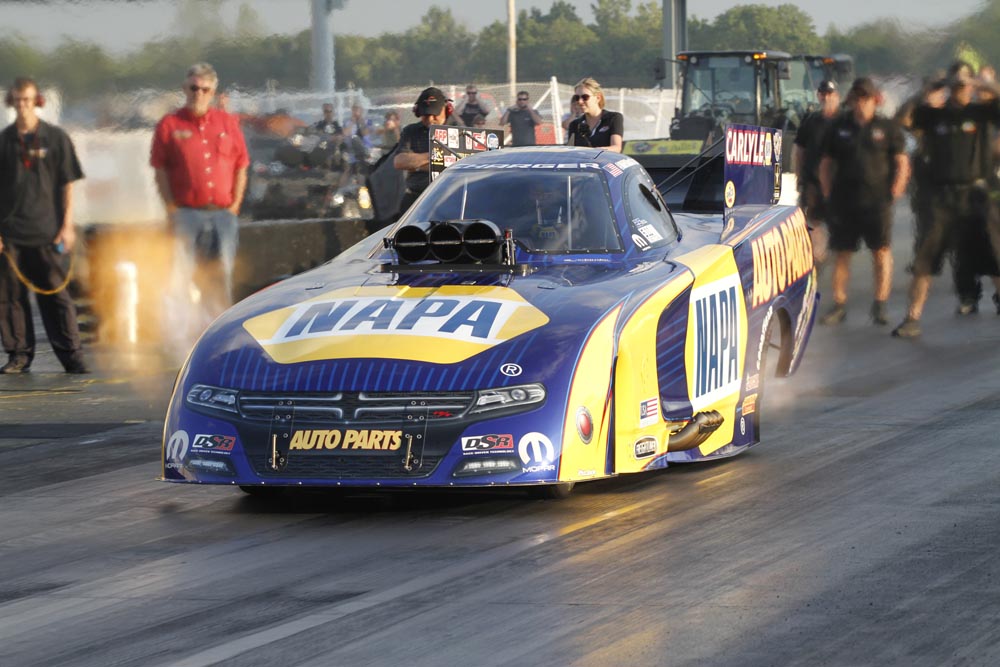 Tickets for the Chevrolet Performance U.S. Nationals are available by calling (800) 884-NHRA (6472) or logging on to www.NHRA.com/tickets

One thought on “Beckman And Brown Quickest In Final U.S. Nationals Testing”