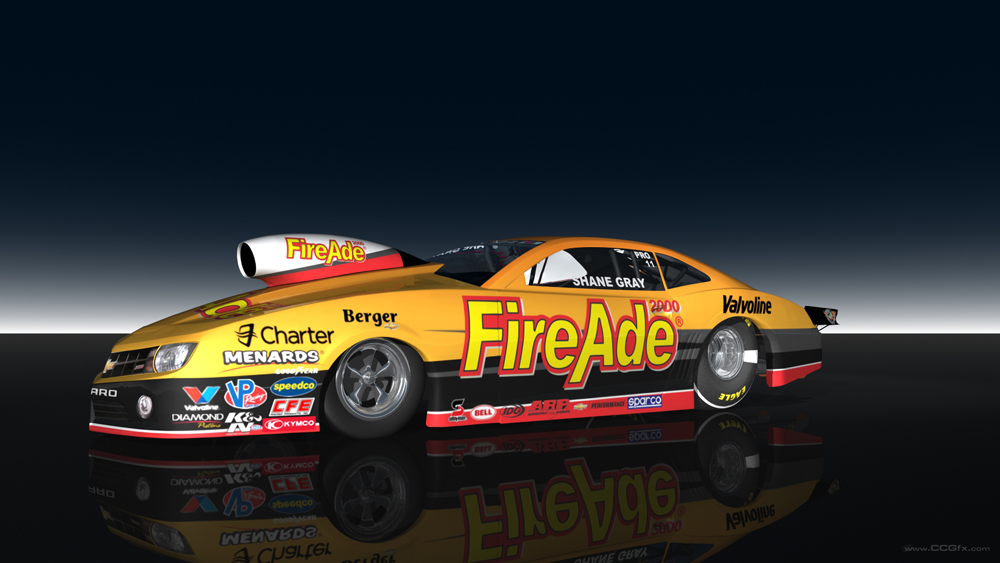 We get a lot of Press Releases landing into the email In-box, but this rendering of Shane Gray’s sleek Jerry Haas-built Chevy Camaro caught our eye.  The new FireAde Camaro will debut at the upcoming Summit Racing Equipment NHRA Southern Nationals at Atlanta Dragway on May 16 – 18.  A recent affiliation Cagnazzi Racing is providing some newly found power for Gray, who has accumulated three Pro Stock national event Wally’s in his short drag racing career.

Gray’s new sponsor, FireAid 2000 has created some innovative, environmentally formulated firefighting products that are changing the way to extinguish all kinds of combustion.  Their products are 98% organic compounds with Zero hazardous chemicals.

DENVER, N.C. – It was announced today that Gray Motorsports and FireAde 2000, the leading extinguisher for households and boating, have entered a multi-race agreement that will include primary sponsorship of the NHRA Pro Stock Chevrolet Camaro driven by Shane Gray at select events during the 2014 season of NHRA’s Mello Yello Drag Racing Series.

FireAde 2000 is the newest chemistry in firefighting foam agent technology and the most complete and user-friendly firefighting agent. Using a proprietary blend of non-toxic chemicals, FireAde 2000 is an environmentally safe product tested by more worldwide government environmental agencies than any other product currently manufactured. The product, manufactured in Fayetteville, Ga., is non-toxic, non-corrosive and biodegradable. FireAde 2000 is used in 42 countries and by over 3,500 fire departments across the United States and in the U.S. Military.

Gray will debut the FireAde Chevrolet Camaro at the upcoming Summit Racing Equipment NHRA Southern Nationals at Atlanta Dragway, May 16-18.

“This is a real neat deal for us to partner with FireAde, especially right there in Atlanta where their headquarters are based,” said Gray, a three-time NHRA national event winner. “They’ve got a great product that is something we should all have in our pit areas and on our tow vehicles out there at the races, and keeping it on the rig and at the shop just gives us peace of mind.”

In addition to flying FireAde colors on the racetrack in Atlanta and Topeka, Gray and his Jerry Haas-built FireAde Chevrolet Camaro will be at Menards, 6401 SW 17th St., Topeka, Kan. 66604, on Thursday, May 22, from 4:30-6:30 pm. Gray will meet fans and sign autographs, and the public will have the opportunity to get up close and personal with his 1300+ horsepower racecar.

“That should be a lot of fun,” said Gray. “Fans can come on by and meet us, and they can knock something important off their to-do list by stocking up on FireAde right there at Menards.”  Menards Stores will have 16oz cans of FireAde 2000 available for purchase.

“We are very excited to partner with Gray Motorsports and take FireAde into Menards stores with a retail promotion,” said Ron Thames, President of FireAde. “This is a great opportunity for all, and we are looking forward to working together.”

Shane Gray finished third in NHRA’s Division 4 Competition Eliminator standings in 2009, and the following year he dove headfirst into the life of a professional full-time racecar driver when he ventured into NHRA Pro Stock competition. In his debut season, Gray qualified for all 23 events on the tour and ended the year with a win at the Auto Club of Southern California NHRA Finals in Pomona. His remarkable first year as a professional drag racer was even more notable as the power was generated in-house, and the engines beneath the hood of his sleek Jerry Haas-built Chevy Camaro are still brought to life and finessed in the Gray Motorsports state-of-the-art, 24,000 square foot facility in Denver, N.C. Gray, now in his fifth season as a Pro Stock competitor, has accumulated three national event wins in 11 final rounds; in addition to the victory at the final race of the year in 2010, he was also victorious in Topeka, Kansas in 2011 and won the Las Vegas Nationals in the fall of 2013.

Gray Motorsports is based in Denver, N.C., just outside of motorsports-mecca Charlotte. The fully equipped race shop was established in the fall of 2009 to develop a top of the line in-house engine program capable of winning NHRA Pro Stock world championships. At the conclusion of 2013 and to further stock their arsenal, Gray Motorsports merged with 2x NHRA championship winning organization Cagnazzi Racing and kicked off the 2014 season with a powerful group of veteran engine builders, tuners, and personnel, as well as an exceptional roster of drivers. Gray Motorsports, owned by diverse motorsports veteran and seven-time NHRA Funny Car victor Johnny Gray, has accumulated three Pro Stock national event wins with driver Shane Gray at the wheel of a Jerry Haas-built Chevy Camaro. Shane’s brother, Jonathan Gray, licensed in a Pro Stock car early in the 2014 season and will make his Pro Stock debut at the NHRA Gatornationals in Gainesville. Multi-category drag racer Dave Connolly, new to Gray Motorsports this season, is looking to add to 23 NHRA Pro Stock wins already on his scorecard and will also compete in the team’s fast and formidable GMPartsNow.com COPO Camaro in Stock Eliminator, with ace sportsman driver Jeff Strickland piloting an identically appearing GMPartsNow.com COPO Camaro for Gray Motorsports.