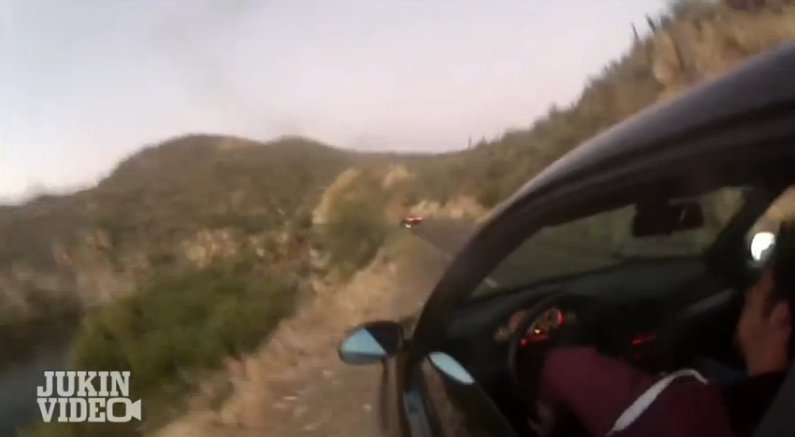 Let’s set there scene here. It is dusk, the sun is setting on a warm California evening. We’re literally strapped to the roof of a BMW M3 as the driver weaves and cuts through the canyon roads that have made the state so famous to gearheads for generations. Following another car, the two drivers apex corners and clearly exceed the “posted” speed as they run through the beautiful scenery. This is a pretty dangerous thing to do because several of the corners are very tight and basically blind so there is no way to know if anyone will be waiting for you on the other side, either in your lane or if you are using the whole road, coming the other way. We’re sure it is exceptionally fun, but it is stupid dangerous as this guy found out.

Sure, the other cars on the road are risky but there’s other risks as well. The cops would certainly frown on this type of behavior on “their” roads and then there are the jagged rocks and cliffs that line this sinuous route. The driver hustles through several corners and then he approaches a sweeping right hander which he enters at a high rate of speed and on the totally wrong line. Yes, the right line would have required him to be on the wrong side of the road but the way he comes into this thing, disaster is pretty much a lock.

You’ll see the driver feed the car more and more right rudder but it just plows ahead and before he knows it, the thing it heading straight for a cliff with no guardrail or wall to stop him. He goes off and it is an interesting and pretty terrifying angle we get to see the trip down from. You’ll see the side curtain airbag blow up, hear the crunching and smashing as well. There are post wreck photos of the car and there isn’t so much as a straight panel left on it. We can only imagine how the interior smelled because this guy clearly ruined his shorts on the way down the jagged hill. Egads.

All the credit goes to the BMW’s safety systems and construction. Few other cars would have protected the driver as well as this car did. Not that we recommend you driving yourself off a cliff, but if you have to an M3 may be the best option to keep yourself alive.