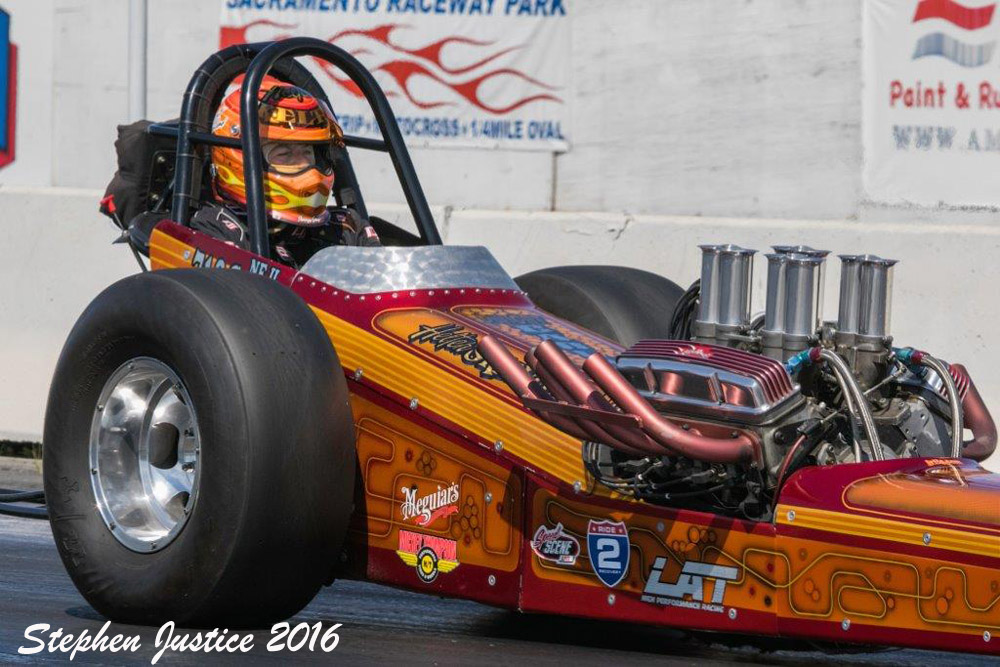 A lot of new faces showed up at Sacramento Raceway’s winner circle Sunday after the conclusion of the Nostalgia Reunion, the third stop for this year’s NHRA Hot Rod Heritage Racing Series. With the nitro classes idle for this event, eleven Wallys were up for grabs, but only two point leaders managed to pad their leads. There were eight first time winners for 2016, including four who were not even in the top ten coming into this event. 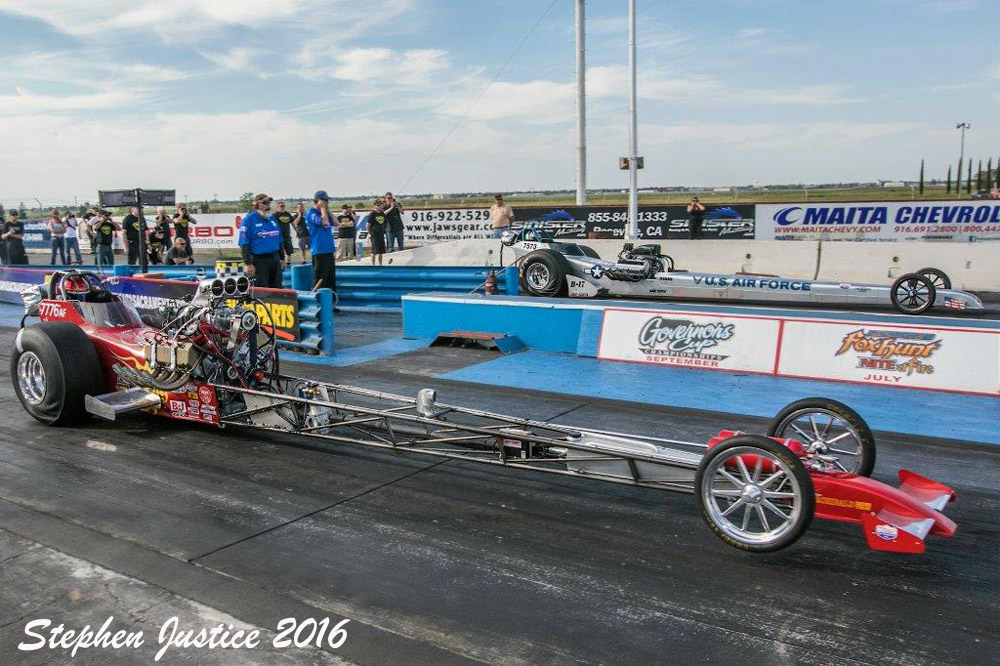 It turned out to be another dominating performance in A/Fuel Dragster by the Adams-Bates team (far lane) from Anderson, Calif. It was also the third successive win by an injected nitro dragster this year. As he did at Wild Horse Pass in January, Kin Bates swept all honors including #1 qualifier, low ET, and top speed for the class. Bates now has two wins and a runner up under his belt for 2016.  Kin Bates Sr. defeated Bobby Cottrell in the A/Fuel final. 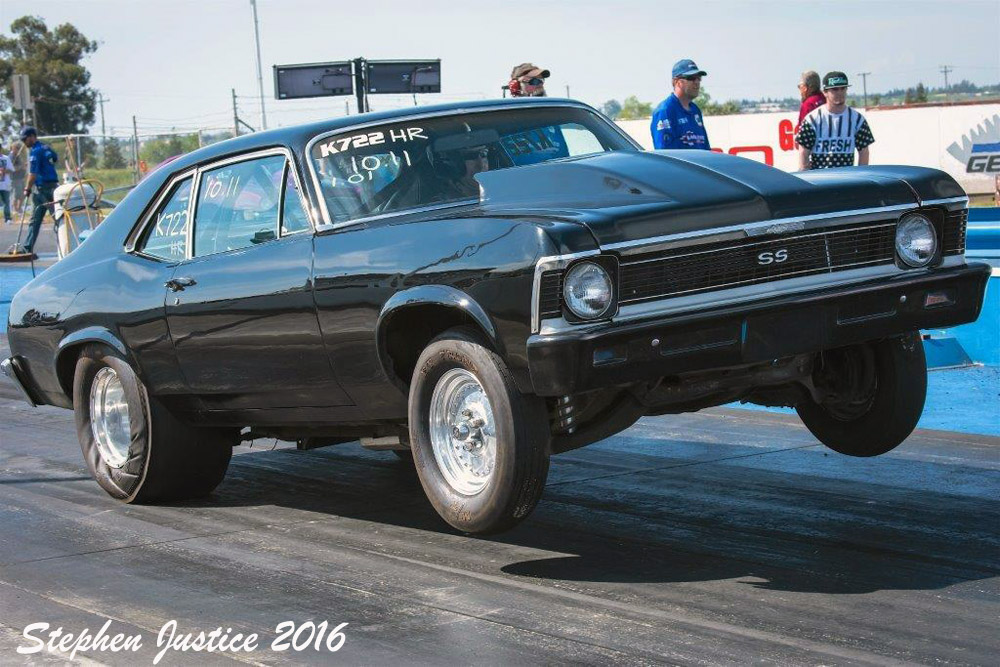 Equally impressive credentials belong to Kurt Kaemerle who has now won Hot Rod twice in a row to go along with a runner up at Wild Horse Pass back in January. Ed Carey and his ’71 D/G Camaro is also getting hot again, backing up his victory at the March Meet with a Wally at the Nostalgia Reunion. Jr. Fuel was won by the #1 qualifier Don Enriquez. Enriquez was supposed to race J. D. Zink in the final round, but Zink was not able to fire for his single in the semis. By rule, the class finished with no runner up, and Don had to merely stage and “take the tree” for the win.

Jason Barta, the reigning 2015 Nostalgia Eliminator 1 champion, rebounded from his round one ouster at the March Meet to win the class at Sacramento Raceway. In Nostalgia Eliminator 2, Dwight Garland Jr. won his first ever Wally with his “Helter Skelter” FED (above), and a very deserving Tim Beeman won Nostalgia Eliminator 3. Beeman began eliminations by dispatching the 2015 champion Ed DeStaute. Then, he finished the day by defeating the #1 qualifier, Wes Morris, in the final round.

After missing the first two events of the year, Visalia’s Richard Phillips returned to action in fine form at the Nostalgia Reunion. Phillips started his day off with a close win over former 7.0 Pro champion and #1 qualifier, Mike Peck. Mike took a hundredths second advantage off the starting line, but Richard powered past him with a 7.032 to Peck’s 7.077. Phillips continued the 7.0 barrage twice again, the slowest of which was a 7.082. In the final round, Wild Horse Pass winner and number two in points, Richard High, gave Phillips a free pass to the winner’s circle when he went red by -.024. 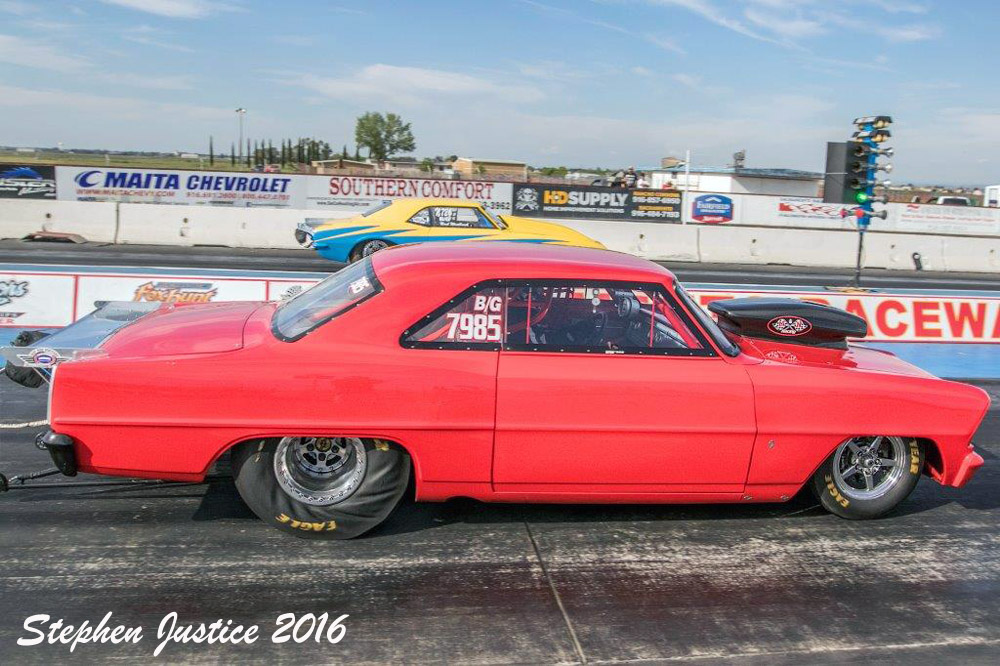 Brendon Frye and Frye Motorsports must love Sacramento Raceway. The team has now won A/G at the Nostalgia Reunion the past two years. Brendon’s RTs were sensational in eliminations, the quickest of which was an .002 against Casey Treur in the semi-finals. Anything slower than a .013 would have meant defeat for the Taft, Calif., driver. Porterville, Calif., did ok, too, with Tim Mulvihill taking the B/G Wally (above). Like Frye, Mulvihill was killer on the lights, recording an .002 against Neal Westbrook in the final round. The Capps family had a great weekend with dad, Mark, winning C/G, and daughter Sabrina making it to the semi-finals of NE 1. 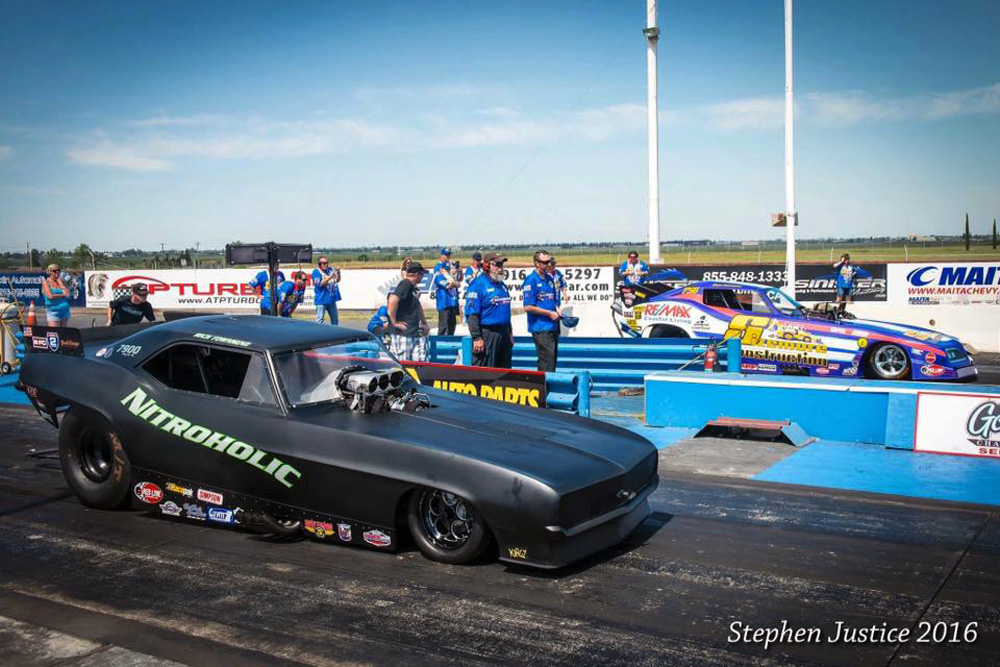 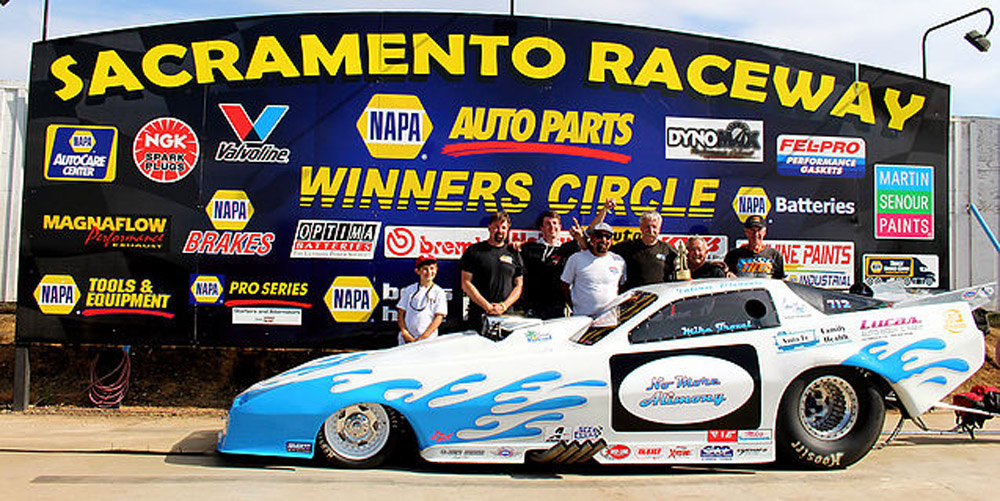 Blown alcohol funny car, the California Independent Funny Car Association (CIFCA), was won by Mike Troxel. There was also a nitro nighttime fire up of “cackle cars” and a car show put on by Jim Hague and the Pleasanton Pushrods Car Club.  (Photo courtesy of CIFCA)

This 1974 Torino Was Factory Ordered By The Feds With A 460, Locker, and More - Cool! Woah Vs GO Part 2: The Proponents Of Nostalgia Funny Car Body Evolution Get Their Say