More Updates On Alex Taylor’s 6-Second ’55 Chevy Build: Her And Dennis Have Lots Of Updates, And A New Show She Just Filmed. 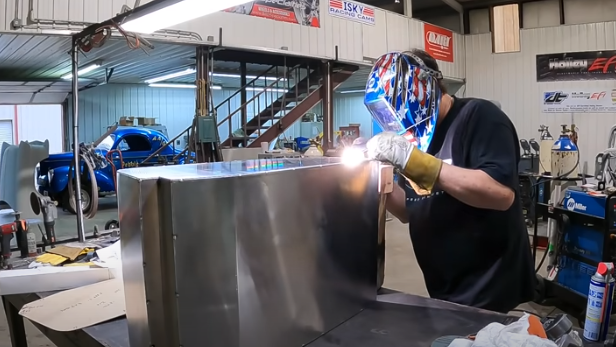 This is a really busy update episode for Alex and Dennis, as they have been burning the candle at both ends. Dennis has been at home thrashing on the ’55, while Alex was out shooting a new show for Motortrend. Of course, she had all kinds of drama getting to and from the Motortrend shoot and was feeling guilty about leaving when she did with so much left to do on the car. But when opportunity knocks you got to answer the door.

In this episode, there are a ton of updates on the ’55 as well as information about the show that Alex was shooting, along with a lot of other cool people. It should be a fun one to watch. Even though she was gone, a lot of work got done and the car is moving along. Building a car at this level, in this timeframe, is a task that most people wouldn’t be able to complete. But the Taylors aren’t the average hot rodding or racing family. There is more talent in their shop than you’ll find most anywhere else, and it is awesome to watch this one come together.

If you have been watching, stay tuned as there will be plenty more build episodes coming over the next few weeks. This thing is supposed to be racing in June! If you haven’t been watching until now, use the link below to watch whatever you’ve missed.

This 1966 Chevrolet Nova Wagon Is LSA Swapped Goodness And Is Ready For Rocky Mountain Race Week Or Drag Week! This Ultra Clean Twin Turbo Chevrolet Colorado Has A 25.3 Chassis, Invaded LSFest, And Is Destined For Drag Week