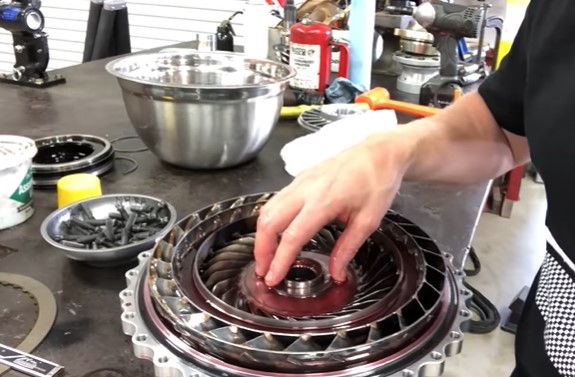 Lock Up torque converters are nothing new in cars. They’ve been around for decades and have been instrumental in gas mileage gains, emissions improvements, and engine durability gains. The way they work is pretty simple, in that a small clutch located inside the torque converter is engaged under certain circumstances so that the engine and transmission input shaft are both turning at the same rpm, like a manual transmission does. This is all great, but what the hell does that have to do with a Pro Mod car? Well…..in recent years lock up converters have found a home in high power drag racing as torque converter technology has gone through the roof. A torque converter has some advantages over a tradition clutch, in that they do have a torque multiplication effect, and when properly configured they can be incredibly efficient at the top end with less drive loss than was possible years ago. But no matter how good, a certain amount of converter slippage is always present at the top end, unless you have a lockup.

But how do you lockup a converter, that is attached to an engine that makes thousands of horsepower? Well these aren’t your standard 700r4 lockup clutches. These are bad ass pieces made to live under this level of power. And they are adjustable, along with most every aspect of the converter, so that you can go from 6-7% of slip, which is considered good on a non-lock up converter.

In this video, Stevie Fast Jackson will show just how they work, how to work on them, and what goes inside of the converter from his team’s world record setting Nitrous Pro Mod.

A Brit Abroad: Rescuing A 1976 Triumph TR7 Out Of It's 34-Year Parking Spot The Gingerbread Man: How Lee Iacocca Almost Got A Lamborghini Edition Chrysler Imperial