This Porsche Runs 8’s, Is On Mickey Thompson ET Streets, And Can Carry The Wheels Like A Boss! 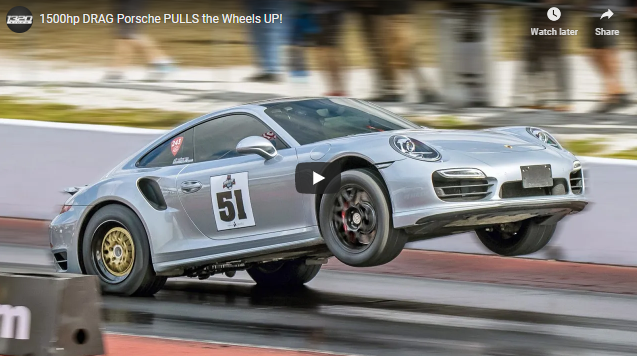 Porsches aren’t the most common of cars on the dragstrip, but their prowess in the motorsports world in general is world renowned. No matter what kind of cars you are into, there is always some level of respect and admiration that automotive enthusiasts have for a Porsche. So it is completely understandable that Fred, from 1320Video, was so excited when he saw this thing with a big beefy Mickey Thompson tire under the back and smelling like race fuel. When this unlikely drag car started ripping off mid 8 second ETs while pulling the wheels, it got serious in a hurry, and the video is fun to watch.

Here is the description from 1320Video:

Seeing a Porsche pull the wheels up is not something we see a lot of, which is why Fred was so giddy about the car after every pass. While the wheelies are incredibly badass, we don’t can’t overlook how consistent this car is after so little track time (the guys over at AIM Performance are really onto something it seems). This Porsche marks a turning point for this event as 2021 is the first year where GTR World Cup, is no longer a GTR exclusive event! Enter the DCT class, which opens the lanes to a new demographic of racers to a well established event they’d likely be attending regardless, but this expansion has made room for extra excitement!

Tre5 Customs' 1964 Suburban Build Is In Full Thrash Mode To Get Ready For Lone Start Throwdown At The End Of The Month! Bryce Menzies Won King Of The Hammers In T1, And Here Are Video Highlights Of The Redbull Truck Hauling Ass Across The Desert.

4 thoughts on “This Porsche Runs 8’s, Is On Mickey Thompson ET Streets, And Can Carry The Wheels Like A Boss!”