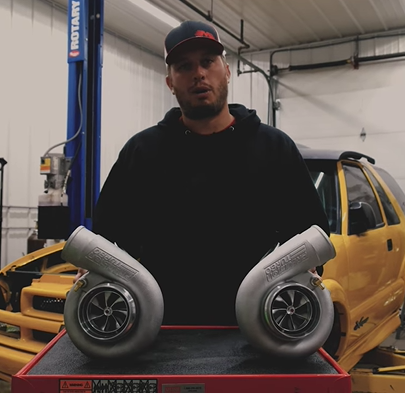 Here it is, the latest on the Twin Turbo Extreme S1o Blazer build over at Motion Raceworks. They are putting this thing together for one of the owners, Brian, and it is going to be a beast on the race track and cruising down the road on events like Rocky Mountain Race Week. Brian is the quiet third of the Motion Raceworks team, with brother’s Doug and Andy finishing out the trio. With Doug and Andy both building bad ass rides the last couple years, it was time for something new and this killer little yellow Extreme S10 Blazer. We’ve been following the project since it started and are excited to see it coming along even further.

If you missed the video on how to make your own turbo headers, then CLICK THE LINK HERE TO WATCH THE HOW TO BUILD TWIN TURBO HEADERS.

In this episode on the build, there is talk of which turbos are going into it, rear axles and center section. a good look at the brakes, and some other fun goodies. Like Doug’s bitchin street driven Nova, this bad boy is still running leaf springs and I think it’s going to be a riot to watch.

There is a lot more going on here than just turbos though, so watch and enjoy.

Relays: You Need Them, Here's Why, And How To Properly Wire Them Into Your Ride's Electrical System Are You Ready For John Force And NHRA Camping World Drag Racing In 2021? Watch Lohnes Interview John To See What He Thinks.