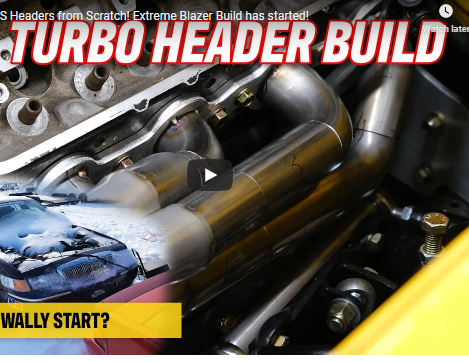 The Motion Raceworks Extreme Blazer build is on! In this video you’ll see how they design and fabricate the custom turbo headers for this thing, from scratch! And while that does sound like a daunting task, it isn’t something beyond the average hot rodders skillset as long as they have the ability to make clean cuts in tubing and put some good tack welds onto that same tubing to hold it all together. You don’t actually have to be able to finish weld the entire thing, as long as you have a friend or local shop that can. But in this video, Doug and the crew will walk you through the process of designing and building the set of turbo headers specific to this project, using the Ice Engine Works EH kit. This kit is a pretty trick tool, used to model headers before actually cutting material.

We like the kit, but it isn’t cheap. With that said, once you have it you’ll use it forever so it is probably worth it if you plan to build more than one set of headers in your life. I’d love to have one in my shop and will be saving my pennies once the new shop is up and running.

I’ve built headers, and tons of exhaust systems, and have always done it with parts and pieces and marking and cutting and sometimes throwing bends in the scrap pile because I got it wrong. The truth is that with the price of materials these days it saves you money in the long run, and especially when compared to paying a shop to build you custom headers. That is crazy expensive.

Watch the video, and listen to Doug and the guys and see if you can be inspired to build your own headers too.

Ron Covell's Rollation Lessons Part 2: Yes, You Can Use The Rollation Method To Make Complicated Rectangular Patters Too! Texas Motor Speedway Becomes 2nd Largest COVID-19 Vaccine Site In The Country. Every Single Racing And Sports Venue Should Be Doing This!