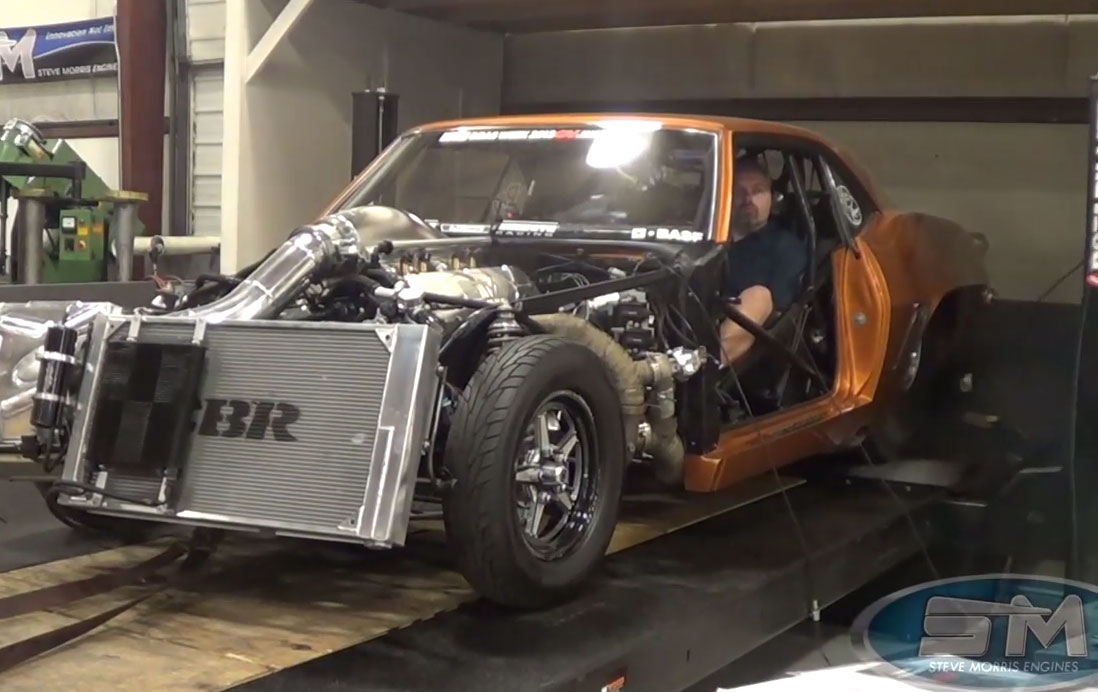 Tom Bailey’s Project “Sick Seconds” 1969 Camaro won Hot Rod Magazine’s Drag Week with record performances never seen before. He ran 6.70s at 213 mph in 2013, and expects to better that thanks to newfound power from his Steve Morris Engines powerplant. The video below shows the car maxing out Steve’s Dynojet XLC-224 Chassis Dyno, which means this bad boy is making some serious suds. What will it take to win Drag Week 2014? Will 6.70s be enough? Jeff Lutz and others are saying that it’s going to take quite a bit more than that this year, and are expecting mid to low 6’s from this year’s winner.

In the video Steve says that the engine in Tom Bailey’s Drag Week winning Camaro was making 290 kpa of boost, which his info shows as 27 lbs. According to our math that’s actually 42 psi, but it depends on where they are reading it. The Holley Dominator EFI on Bailey’s Camaro is one bad bitch, and offers a ton of trick features, including traction control, which could be a factor in winning this year as we are going to be hitting tracks with varying levels of prep. Osage Casino Tulsa Raceway Park is going to be the start and finish track this year, and we know that David Cook, of Hook by Cook fame, will have the lanes at Tulsa prepped to the max, so guys like Bailey with big power should be able to put it down.

When we asked the guys at Steve Morris Engines to give us a little more info on Bailey’s combo, and whether or not they were going to make any other changes to it before Drag Week 2014, Alex Esnaola was happy to hook us up with some of the details. Here’s what he had to say.

“The engine will only be freshened up. No major changes other than what is stated in the video (the stuff we already did this past week – intake manifold, injectors, CNP, new WG’s and BOV’s.”

This engine is our DRAG WEEK BULLET. The 615” BBC is very similar to what we did for the 2004 Bentley Continental GT belonging to Steven Neimantas (check it out on our FaceBook page – he used smaller 88mm turbos and only made 3,082hp). Features twin Precision 94mm turbos, TurboSmart waste gates and BOV, our new billet intake manifold and billet valve covers (designed and machined in-house), and runs on C-16 through a single set of MORAN injectors. We are using the Holley DOMINATOR EFI system with coil-near-plugs this year, boost controller from HYPERAKTIVE, RacePAK data acquisition, etc. We have an electric fuel pump connected to a 20-gallon tank in the rear for the street-driving portion of DW, and a belt-driven pump with 2.5-gallon fuel cell up front for C-16 at the track. A simple gate valve changes between the two, and the touchscreen Holley display changes tunes in seconds. We have been running this same engine in this Camaro since DW 2012. We made a change on the cylinder heads last year, but the rest is the same…and it remains the same to this day. When freshened up, don’t expect things to change too much – why change something that obviously works and makes it the distance?

We couldn’t agree more. Stay tuned for more Drag Week news in the coming months as we get closer, and for all your Drag Week 2014 Coverage, BangShift.com will be your source for up to the minute news, results, rumors, and more.