The Winners: Watch Beckman, Torrence, Savoie, and Hartford Close The Deal At Dallas! 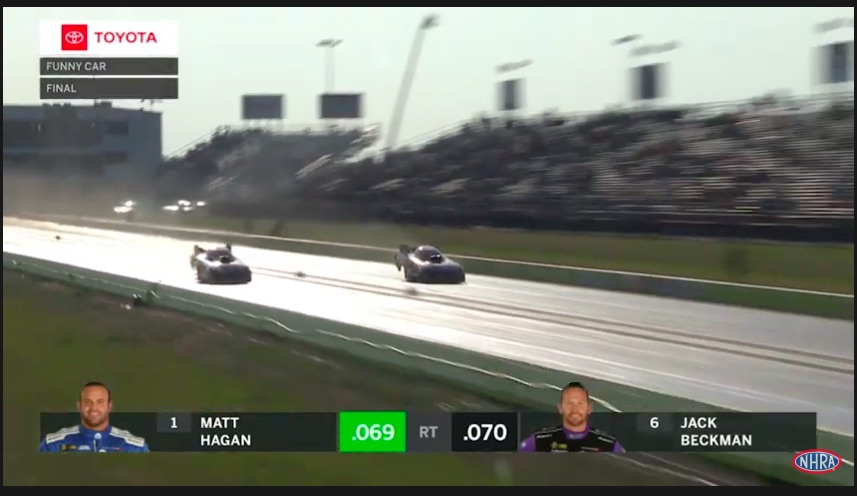 It was one of the most “normal” feeling races of the 2020 NHRA Camping World drag racing season last weekend as the tour arrived at the Texas Motorplex in Ennis for the AAA Texas NHRA Fall Nationals. It was an event being held at the correct time of the year at the correct track, packed a healthy crowd, and delivered some killer Sunday performances across the board. It was also the first ever race to officially kick off the Camping World era of NHRA drag racing and that in and of itself was amazing.

The points races across the Camping World series classes are incredible and some twists and turns kept them interesting as we get ready to run the NHRA SpringNationals at Houston this coming weekend. Yes, the week after the Fall Nationals we’re going to run the SpringNationals.

Anyway, in pro stock motorcycle Jerry Savoie made his 6th straight Dallas final and became a back to back winner after dispatching Joey Gladstone. During eliminations, Matt Smith who was leading the points and had a rocket of a bike suffered a massive disappointment when the machine would not fire once we got back into racing.

Pro Stock car saw a scrappy Matt Hartford get creative on the starting line to beat Erica Enders in the semi-finals and then he took down Greg Anderson on a hole shot in the final round. It was a really awesome win for Hartford who had ben frustrated a couple of times this year. A well driven race.

In nitro funny car it was Jack Beckman and Matt Hagan battling right to the end with Beckman getting the honors and the Wally he really wanted, the first with a Camping World logo on it. He is now behind Matt Hagan by a measly four points and these guys show no signs of letting up or taking it easy on each other with only two races left to go. Totally insane!

Lastly it was an all Torrence affair in the finals of top fuel as Billy and Steve battled at their home track. The result? Steve is now a 40 race winner in Top Fuel and the championship hopes of Doug Kalitta have dimmed slightly. It ain’t over yet but the way those guys are running, Kalitta may not only need a bad ass performance but some luck on his side before too long.

See how the winners all got the job done in Dallas last weekend – great stuff!

The New 2021 Mitsubishi Eclipse Cross Isn't Much Of A Cross, and Eclipse, or Anything Else Truly Custom: Watch Don Groff Run His Custom Built Toyota 1JZ V12 Powered Open Wheel Car On The Dyno