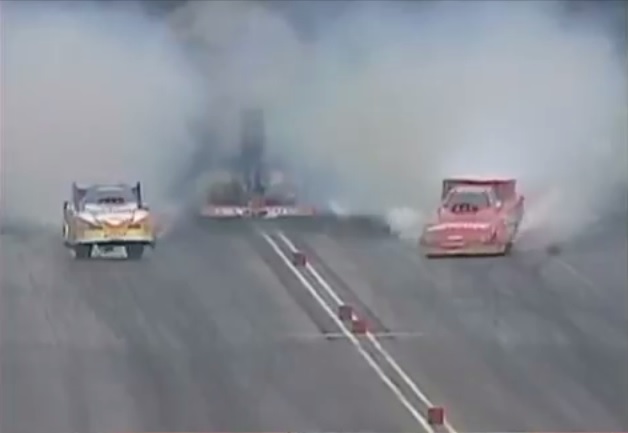 When Phil Burkhart and Cruz Pedregon lined up next to each other at Bristol in 2004 neither of them knew that the next nine seconds of their lives would be some of the most intense in drag racing history. When both guys mashed the gas at the flash of the tree the cars immediately smoked the tires. We’re sure that each guy immediately let out a sigh of frustration until he realized that the other guy was in the same predicament and as soon as they got onto the same page, all hell broke loose. In a frantic struggle to reach the (then) quarter mile finish line, the guys were on and off the gas, alternately smoking the tires, pulling wheelies, and getting more sideways than a funny car ever should. It was one of the most exciting races that we remember and just watching the video still gets us wound up.

We are sure that drivers and crew chiefs…well crew chiefs anyway would tell you that this is the stuff that they hate because it means that they either missed the tuneup or something else happened but from a fan’s perspective what is neater than seeing two guys working as hard as they can to harness the literally unbridled fury of these cars. Sometimes when they walk down the track nice and straight it almost looks too easy (we know that it isn’t) but when stuff like this happens the fans leap to their feat, the place goes nuts, and everyone is buzzing about it until the next round.

I am heading off to the NHRA Phoenix race in a couple days and while none of the guys who read this that race these cars would agree, I hope that we get at least one of these throttle whomping, tire smoking, lock to lock steering fights down the strip…especially if I am on the top end to interview the drivers!

Whacked Out Video: Watch An Enraged Stock Car Racer Chase And Wreck Someone In The Pits! Now THIS Is A Burnout! Watch Arne Kallevik's Massive Head Gasket Killing Smoker From Santa Pod