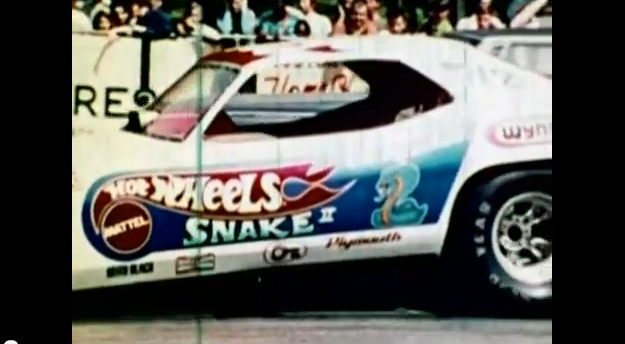 More than 20 minutes of video from 1971 profiling the epic and incredibly profitable rivalry between Don “The Snake” Prudhomme and Tom “The Mongoose” McEwen, as bankrolled by Hot Wheels. The pair famously traversed the country, racing multiple times per week in match race action. They also hit the major NHRA and AHRA events of the day, but their bread was buttered on the match race circuit. At one point in the video, Prudhomme claims to be making more than $100,000 a year…in 1971. That was stratospheric money for the time.

The footage is bad ass, the story is all-time, and the two men that the film centers around come off as genuine and real as possible. This was long before the days of trumped up reality TV, the story is honest and unflinching. Prudhomme is his always honest self, especially when describing the differences between himself and McEwen. The scoffs at the idea of fancy shoes, girls, and parties, instead telling the camera that his money goes toward new blowers, better engines, and ways to make the car faster. That’s one of the reasons the rivalry worked so well. There was the showman in the Mongoose and the laser focused racer in Prudhomme. Truly a match made in heaven.

This story has been told in the dramatic film “Snake and Mongoose” which we really enjoyed but there is just something about seeing them at their peak in the original film. They way they traveled, the strips they raced at, and the level of fame they enjoyed was fantastic. This was not a glamourous life. It was hard and it was a constant struggle forward to make the dates, run the numbers, and live up to the hype of what people expected them to do.

This video is one of the most honest looks into the world of the traveling funny car racer of the 1970s that we have ever seen. One of our most favorite moments comes about five minutes in when Prudhomme watches a drag bike go down the track and casually says, “I wouldn’t drive one of those for nuthin.” Fantastic.

XL Video: Why You Never Let Your Friend With A Mining Excavator "Help" You Wash Your Car Incredible Video: The Day A Wrongly Drilled Oil Well Drained A 2.5 Billion Gallon Lake - The Story of Lake Peigneur!