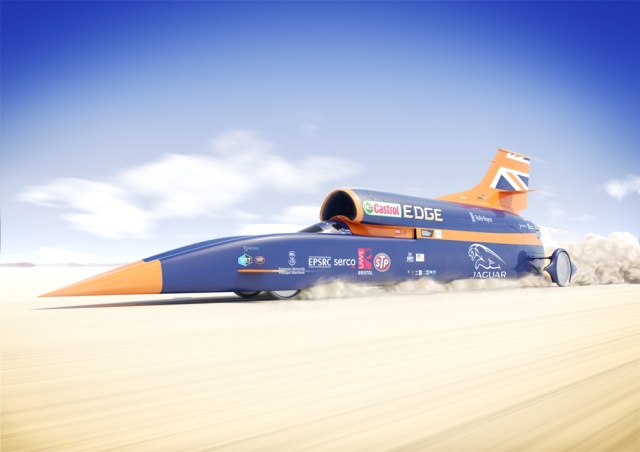 The Bloodhound SSC is officially halfway to the stated goal of 1,000 mph with a run of over 501 mph recently. Andy Green was at the wheel and all systems functioned properly as the run was planned to be a 500 mph test. Shortly there will be a 550 mph test in the same Kalahari Desert location that the team will be using to run all of their huge performance numbers. The current record is 763 mph as set by Noble and Green several years ago.

There was one minor hiccup as a fire warning went off on Green as he was slowing the car down. Green followed procedures and the safety crew was right there to help him. Thankfully there was no fire on-board the car and the whole situation was traced back to a wiring glitch.

Some people hate this project, we think it rules and now it is in the top 10 fastest cars built in human history!

Bloodhound testing heats up as Green breaks the 500 mph mark

Under the blistering Kalahari sun, Bloodhound LSR today secured its place amongst the top 10 fastest cars in the world, passing the 500 mph milestone with a speed of 501 mph (806 km/h) and a successful twin parachute release to slow the car on the 10 km mark.

During the engine shutdown procedure, a fire warning alert went off in the cockpit. Pilot Andy Green called ‘Fire, Fire, Fire’ over the radio and quickly evacuated the cockpit through the hatch. Rescue Trucks 1 and 2 were on the scene in seconds. The firefighters inspected the rear engine bay and discovered there was no fire. The alert was triggered by a fire wire which is designed to burn and break at 160°C. The afternoon sun was 36°C, which, combined with the heat soak from the Eurofighter Typhoon, triggered the alert. This exercise validated that both the fire detection system and fire response processes the team has set up work successfully.

Over the last few runs (450 mph and 500 mph) the Bloodhound LSR car received minor bodywork damage to the rear deltas. These are the aerodynamic panels that cover the rear suspension. Sand and grit kicked up by the car’s airflow has hammered a small area of the bodywork, crumpling the titanium skin-like tissue paper. The first repair failed to survive yesterday’s 491 mph run, however the new patches held up unscathed.

The team is now preparing for the next challenge, 550 mph, which they aim to hit in the next few days.

The Inside Line: Here's An Awesome Look At The Nuts, Bolts, and Inner Workings Of Roger Penske Buying IndyCar and Indianapolis Motor Speedway Wanna Make A Bitchen Belt Grinder For Your Shop At Home? Watch This