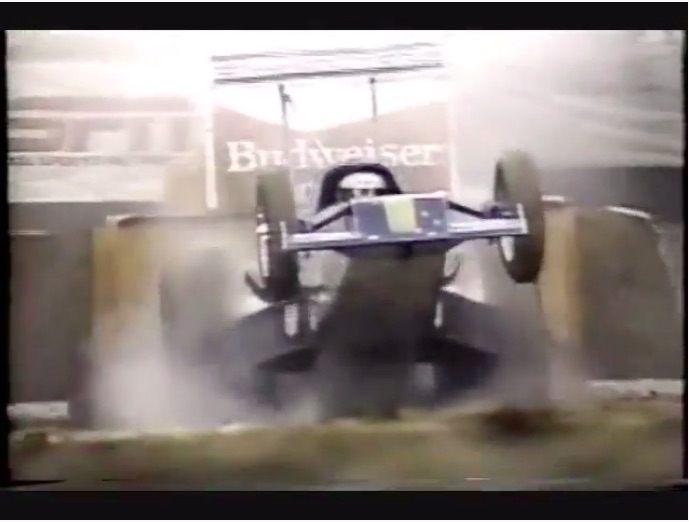 There’s a lot of awesome in this clip that runs for about five minutes and was captured in 1988 at a pulling event. The main attraction here is a guy named Bob Bauman who has an exhibition puller called Canned Heat. This sucker is a full-on rear engine dragster with a hitch on it. The car is painted wonderfully, the thing it legitimately beautiful and hell, Bauman takes this whole thing straight over the top with freaking dry hop before his hook.

Mike Gallaway is one of the announcers and Mike’s a pro’s pro who was around this stuff constantly in the 1980s and his voice will be very familiar to you. He’s tasked with giving us the skinny on this car and he does an awesome job. The machine is powered by a blown 500ci big block Chevy. The engine is listed as a “Rodak” but we’re sure it was an aluminum Rodek engine with its blower on top. The car is wonderfully finished, complete with the wing. One of the best parts of the video is when Gallaway’s co-host asks about the wing. Mike’s quick to mention that it is decorative in pulling.

The hook itself is pretty eventful. The car leaves, gets a good bite and the front end comes up. At this point smoke is just pouring out of the car. Initially we thought it was part of the show like a dragster smoking the tires but it was the clutch going Chernobyl in front of the crowd. Later on down course the motor barfs oil all over the freaking place.

It was Bob’s second time out. Pulling is hard.

Press play below to see Bob Bauman and his Canned Heat pulling dragster!

Long In The Tooth: The 1982 Maserati Merak SS Was An Italian Looker That Had Lost Its Fastball Fish Out Of Troubled Water: Watching This Super Late Model Stock Car Attack Road Atlanta Is Amazing