BOOM! Watch This Fuel Altered Explode A Tire And Driver Bobby Marriot Handle It Like A Boss 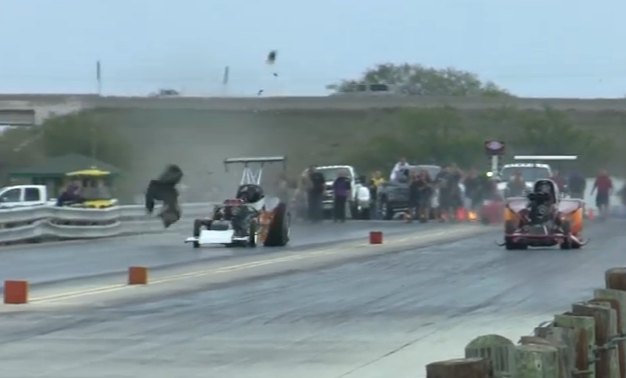 (By Jason Mazzotta) – Outlaw fuel altereds are some of the most unpredictable drag racing vehicles on the planet; with huge horsepower capable of running the 1/8th mile in the 3 second zone at over 200 mph, along with minimal downforce and a short wheelbase they are always on the edge. The Outlaw Fuel Altereds Association produces some of the best altereds in the country as well as some of the biggest events including the Pro Mod vs. Fuel Altered Showdown, along with a points series running at tracks in Texas, Oklahoma, and Louisiana.

This is a run between heavy hitters Bobby Marriott in the “Shockwave” against former alcohol funny car driver Jimmie Jones, with all the focus soon turning to Marriott in the far lane. After launching hard off the line the tires start shaking and spinning, and the crazy altered makes a move to the centerline and the 330’ cone. Marriott makes a correction to keep it in the groove and “boom” goes the right slick.

Marriott does a masterful driving job, keeping the car in his lane through the lights, as he gets the chutes out quickly and makes the turn before the sand, all without hitting any walls, cones, or Jones in the other lane. Marriott proves he is a top notch pilot as he is able to keep the “Shockwave” altered under control even in one of the most unpredictable situations.

One thought on “BOOM! Watch This Fuel Altered Explode A Tire And Driver Bobby Marriot Handle It Like A Boss”