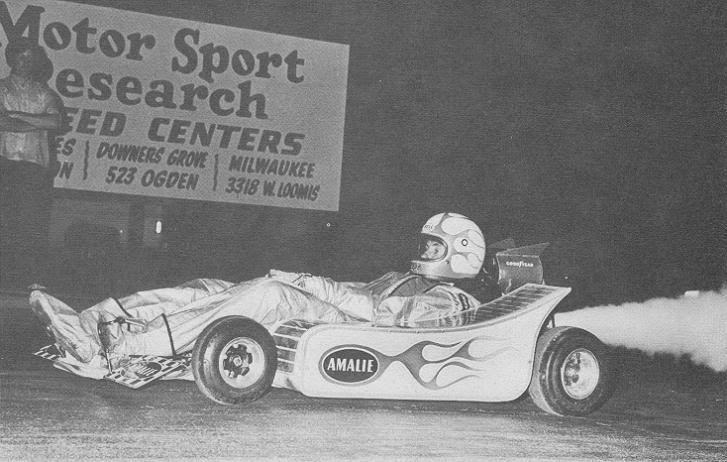 WOW! About six months ago, Captain Jack McClure contacted us and said that he was close in getting permission to run his famed hydrogen peroxide rocket kart at a drag strip here in the USA for the first time since the 1970s. We heard nothing from him after that although we did see video of him making a couple of test hits on the street with the thing. The man is an 88-year old bad ass. Anyway, word is breaking right now that McClure has been granted permission to run his kart at the ManCup Motec World Finals presented by Mickey Thompson Tires at South Georgia Motorsports Park in two weeks. This is huge! Race organizers told Jack that he will need to make several runs to “creep up” on his speed and that ultimately they will limit him to an eighth mile full throttle blast, but let’s be honest….who cares?! The fact that this thing will be blasting off again with the man who gained such notoriety with it more than 40 years ago is amazing and we’re awfully glad for Jack because he has wanted this for some time. He located the kart and Ky “The Rocket Man” Michaelson restored it to working order. We’re over the moon for the guy.

We plan on catching up with Jack for more details but until then, here’s the press release and below that are videos and audio of the machine in its heyday!

The MoTeC World Finals presented by Mickey Thompson Tires has added yet another attraction to the star studded show. Today the ManCup announced that they will showcase the talents of speed demon Captain Jack McClure and his rocket powered go-kart on track. Captain Jack is a true legend in the hydrogen peroxide rocket scene and is excited to have the opportunity to make some exhibition passes. His iconic rocket powered go-kart, which was given a complete frame up rebuild recently, is the same one that Jack displayed at the 2013 running of the Finals.

Exhibition passes will be scheduled for both Saturday and Sunday of the event. The MoTeC World Finals presented by Mickey Thompson Tires; Getting bigger and better every day! Make your plans now to attend the greatest motorcycle drag racing show of the 2014 season November 14-15-16 at South Georgia Motorsports Park (SGMP) in Valdosta Georgia. – See more at:

UPDATE: Virgin Galactic's SpaceShipTwo Has Been Lost In Japan They Run Top Fuel Cars On Unprepped Surfaces And The Results Are As Wild As You'd Expect (Video)