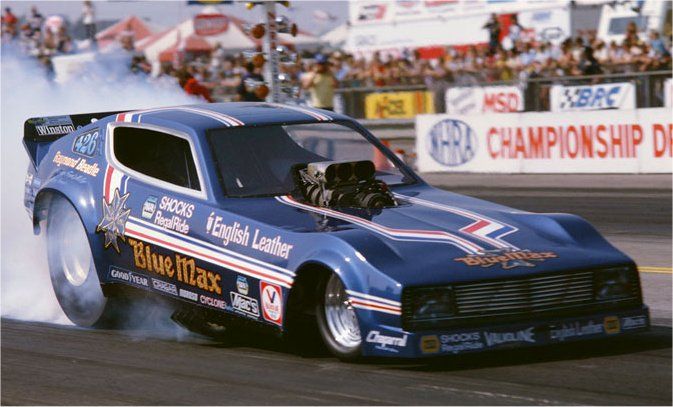 Welp, he done went and stepped in it. With an effort to make some sort of backhanded slap across my face, McTag ventured into the world of race cars as a second theater of war in this Birth Year Car Battle Slapfight. He chose a weirdo Lancia rally car from Italy as the race car that best represents 1983 when he was born. He didn’t even get the freaking country right with that pick. Just to prove a point and to truly end this little tiff once and for all, I am going in with the heavy guns. Clearly the 1980 NHRA funny car world championship winning Blue Max of Raymond Beadle mangles that little rally car in every way, shape and form.

Some questions. How many good looking ladies have you ever seen photos of sporting a t-shirt that says, “Lancia 037”? The answer is freaking zero. Look up 1970s images and you’ll see people with Farrah Fawcett haircuts and Blue Max shirts. Look at the standings and you’ll see the Blue Max winning championships, match races, money, and glory galore. The Texan Raymond Beadle was living he rockstar life as the undisputed king of funny car drag racing at this time, and with a blown hemi sitting at his ankles, he had his hands full on every pass.

Sure, the little Lancia had to avoid trees and rally spectators wandering onto the course. Perhaps the occasional cow, but Raymond Beadle had to avoid connecting rods, oil slicks, and as you will see, fire. Oh and before you give me the, “well that was a factory race car!” it as about as much in common with a “Lancia” as this Arrow does with a Plymouth.

McTag, thanks for playing. The Blue Max wins.

Press play below to see a couple of clips of the Blue Max working in 1980!

Quick Drive: The 2020 Ford Explorer ST - Size Matters, Horsepower Matters, and Displacement Apparently Does Not Anymore Working For A Living: What Do Top Fuel and Nitro Funny Car Crews When The NHRA's On Hold? At Kalitta Motorsports, They Work!