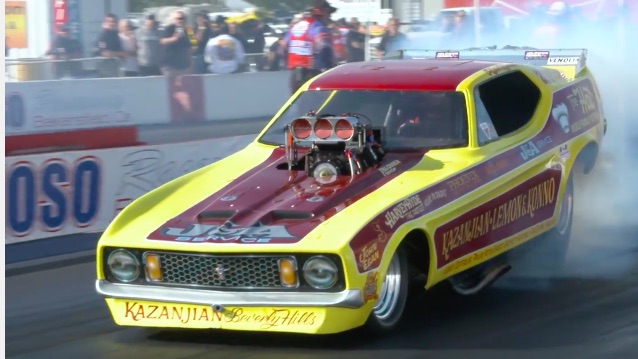 We’re sure you watched our live streaming coverage of the rain delayed Monday final rounds at the 2017 Good Vibrations March Meet so you know that Ryan Hodgson won nitro funny car and Mendy Fry won top fuel after Mother Nature wrecked everyone’s fun on Sunday. Kris Krabill who was in the lane next to Hodgson suffered a massive fire and you will see that in this recap video.

Hosted by BangShifty pal Lewis Bloom and shot by noted drag racing video maven Les Mayhew, it is a tight little video that hits the marks. We dig the winner interviews with the three champions and Krabill who survived a really, really nasty fire. The Good Vibrations March Meet is one of the stops on the 2017 NHRA Heritage Series tour. There are a bunch of races all season long and the culmination of it all is the California Hot Rod Reunion which will be happening in the fall right back at Famoso. The place literally bookends the nostalgia drag racing season.

So here’s one last shot back at the 2017 March Meet highlighting the final rounds in the nitro burning categories. Enjoy.

Watch this highlight video from the 2017 Good Vibrations March Meet –

This Video Of A Mechanic Performing The 261 Step Process Of Installing Heads On A 6.7L Ford PowerStroke In Time Lapse Is Awesome Body Work Tech Video: Paintucation's Kevin Tetz Takes You Through The Basics Of Panel Alignment