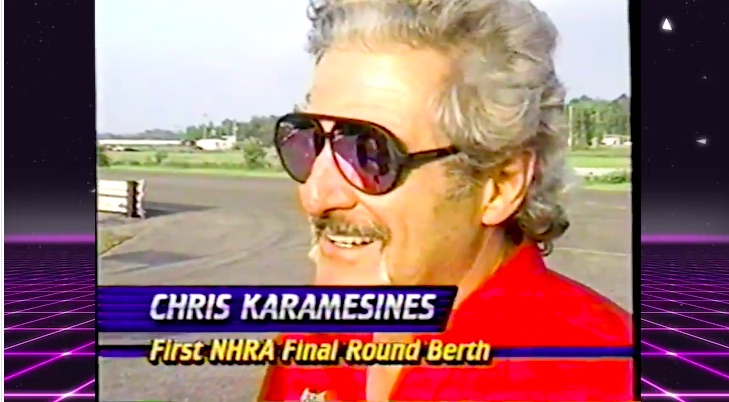 It was a magical thing to watch. The oldest top fuel finalist in NHRA history at 61 years of age, Chris Karamesines “The Golden Greek” the man, the myth, and the legend, was finally standing on the verge of winning an NHRA National event. The event in question was Le GrandNational Molson, which was the NHRA event held each year at the Sanair Super Speedway for decades. A day of awesome competition had seen the Greek outrun Lori Johns, beat Joe Amato, and finally find himself in the final against Gary Ormsby who had won the 1989 NHRA top fuel championship.

Karamesines was a long way from the halcyon days of 1960 at Alton, Illinois where he and crew chief Don Maynard supposedly made drag racing’s first 200mph run. It was that run that started a career that still maintains today as Karamesines can be found racing top fuel dragsters in 2020, albeit not with the success he had in 1990.

This is the first of two Christ Karamesines Time Machines I made and it’s a really fun watch. The dude it awesome and he is still awesome today. Quick with a smile, soft spoken but never one to be messed with, this 90-ish year old guy is a national treasure and he was one at the age 0f 61 as well.

#NitroTimeMachine: After 35 years The Greek makes it to his first final round Nitro Time Machine presented by E3 Spark Plugs

Dents, Dings, and Drab: This Korean War Jeep is The Perfect Starter Machine To Feed Your Jeep Habit Last Of The Gladiators: This Documentary About The Career Of Evel Knievel Is Awesome