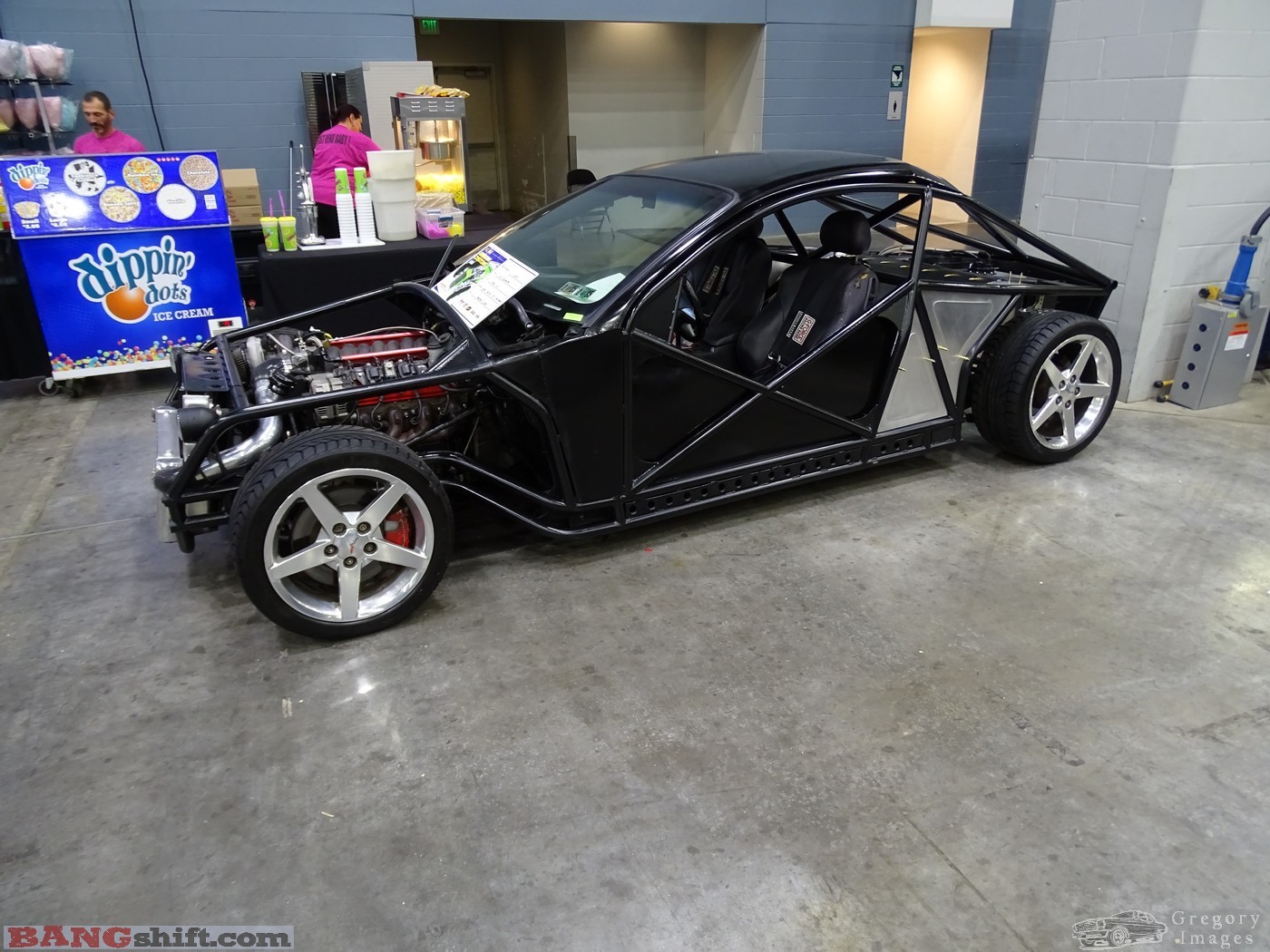 (Words and photos by Doug Gregory) – Newer stuff in here.  3rd photo in you’ll see what is a tubular chassis 2004 GTO-ish thing.  I’m not sure what to think of it, but with the vette and miata karts out there I suppose ‘why not’.  That blue IROC-Z is owned by a former Norwood, OH plant worker.  Significance..?  That’s where this car was made and if I read the text correctly he’s had it since new.

Occasionally I will take photos of stuff I don’t like and that typically translates to something I think is ridiculous.  The white Cherokee is one such offering.  All four doors open Lambo style and it has enough sound equipment to drown out a Blue Angels demonstration.  Lots of white cars this year and that includes this late Supra parked next to a white BMW.  Not sure why they were sitting together when they have nearly nothing in common.

This blue, surpercharged V-6 Mustang was looking rather impressive.  I’d liked to have heard it because I bet the sound is unique.  Mopar was represented with Scat Packs, Hell Cats, and even a Demon.  Mitsubishi Starions are not common and for two black ones to be aligned together at one show drew a good bit of attention.  One of them was sporting a LS transplant while the other stuck with more traditional power.  This bright orangeish-yellow car seen in the last photo was just sitting in an inconspicuous spot with no signs, lights, or anything to brag about its importance.  I didn’t have a clue until my son and his best friend explained to me this was not just any car.  This is a Lexus LFA Nurburgring edition.  So what, right?  Lexus hadn’t made a supercar prior to this effort and the company was so committed to making a statement they spent 7 years developing it and lost money on every one produced.  It’s an exercise in engineering.  It’s got a 4.8L V10 that can rev from idle to 9,000rpm before you can blink.  It was super-expensive and very exclusive with only 500 units made over two years.  This bright example you see here is supposedly one of 15 Nurburgring editions sold here in the states.  The boys enticed me to listen to some YouTube videos of it pouring the power on.  Its exhaust note is very similar to the F1 cars I remember from my youth.  I’m not sure the sound is worth the half million dollars some of these are fetching, but I wouldn’t turn down a ride in one.

Come back for more from the Autorama in Cincinnati.