Classic YouTube: Running An Avanti Down The Strip At Barona 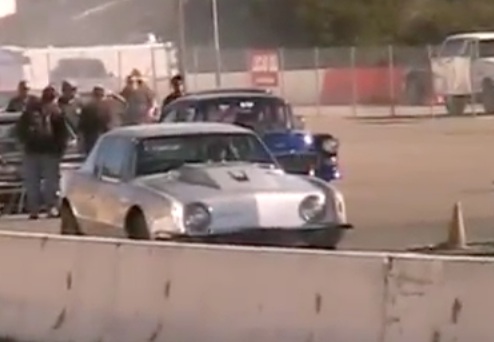 A real-deal Studebaker Avanti or one of the early, Studebaker-powered post-shutdown Avantis is a solid find and is usually held in high regard. With Studebaker V8 power, styling and safety features that were well ahead of their time and the option of adding on a Paxton supercharger, the Avanti was an amazing final flame from a car nameplate that was about to go under. The strange deal concerning the Avanti is that the model outlasted the company that made it: Studebaker folded up in 1967, having closed down the car manufacturing side of the house in 1966, but the Avanti stuck around through a series of owners until 2006. For a model that ran for forty-four years, you don’t see many of them outside of shows and special events. Even considering later model’s low production figures, that still doesn’t explain the lack of the bottom-breathing coupes. Where are they all? It’s not like they are too funky to work on…later versions were based on the G-body Chevrolet Monte Carlo, and the last ones were based on the Ford Mustang. We’ve seen real-deal Avantis screaming at Bonneville, but we wouldn’t mind seeing one running as a small-tire screamer, would you?

The RideTech Report: Talking Four Links, Spindles, and Lots More In Suspension Here Are 500 Photos From King Of The Hammers 2017 In Johnson Valley. Rocks, Dirt, Dust, And More!

2 thoughts on “Classic YouTube: Running An Avanti Down The Strip At Barona”