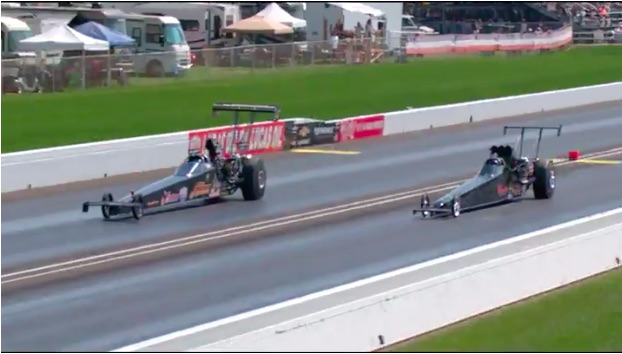 Without a doubt the most memorable moment of my 2016 drag racing year and the most memorable moment of my so-called career of drag race announcing came at Indy. Specifically it came during the final round of the top alcohol dragster category where Dennis Taylor and I were calling the action. The two cars in the final round were Canadian runner Shawn Cowie and New Hampshire’s Dan Page driving a car he built at his chassis shop and that Arthur Gallant owns and tunes.

I lost my mind when Page won because Dan’s a New England Dragway guy, a guy who I was announcing running down drag strips when I first tried my hand at this stuff in the late 1990s. He’s a local guy gone big and it gets no bigger if you are racing an alcohol dragster than the final round at Indy on Monday afternoon. My heart was beating out of my chest when the two cars were staged and as is my job, I called it as down the middle as I could. When Page’s win light illuminated I was pounding on the desk in front of me like Nikita Kruschev did with his shoe half a century ago. This was watching a friend achieve something awesome. Something that lasts a lifetime. Something that no matter what else happens, no one can take away.

I’ve got to admit that when you see Page’s car making the turn at the top end, I had tears running down my cheeks. In many ways he had a whole region’s worth of fans and supporters in the car with him on that run and it meant the world to provide the human soundtrack to it.

No matter what else I get to do or where else this wacky world takes me, I’ll never forget the gunfight in the top alcohol dragster finals at Indy 2016.