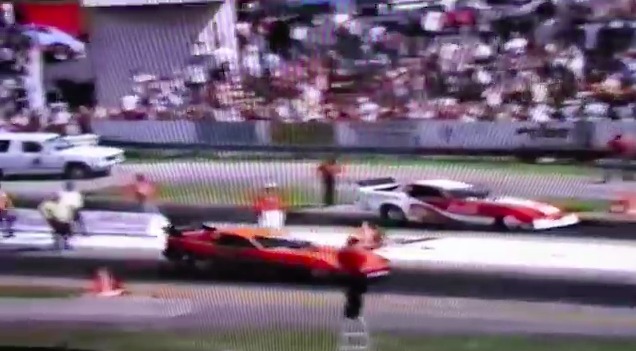 John Force was not JOHN FORCE in 1984 but his star was certainly on the rise and his living was being made in the seat of the Coca-Cola funny car you’ll see in the video below. Force was racing as often as he could and anywhere that would let him during this time of his career and it was paying off. He would be the 1984 AHRA funny car champion and during the same year he would also attend 12 NHRA events, 10 of which he actually qualified for. It was also the year that Force’s uncle Gene Beaver introduced him to a guy named Austin Coil. That partnership changed the face of professional drag racing forever. This event was the AHRA Grand American Nationals held on July 6-8, 1984. There would be one more “real” AHRA event before the organization folded.

As an aside, the car in the other lane is the St. Moritz flopper owned by Oklahoma based Dick Mortiz and driven by longtime funny car pilot Jim White.

While the Force connection to this video is pretty cool and shows him on the upside of his career, it is the exact opposite with regard to the well groomed and nice looking facility he is racing at. US 30 Dragway in Gary, Indiana would close and never reopen just a few months after this video was made. The track is still “there” and undoubtedly you have seen one of the zillion photos that has been snapped over the years of the ever more faded AHRA shield that was painted in the center of the track.

The AHRA itself was in collapse mode by this time in its life and at the end of the 1984 season it pretty much self immolated and went away as a series. There were multiple lawsuits flying around, track operators abandoning the organization to start their own (ADRA), and when the 1984 season concluded at a virtually empty strip in Eunice, Louisiana the fate of the organization was sealed. Orville Moe would run an “AHRA World Finals” event each year at his track in Washington, but that was it.

So what we had here was a meteoric star on the rise, a track that was heading towards death, and an organization that was dead and just needed to be informed of that fact. 1984 was also the year that Don Garlits made his triumphant return to drag racing at the NHRA US Nationals (and won) a move seen by many as saving the top fuel category which had been in the doldrums of participation and interest during the previous years.

So why did US 30 close down at the end of the 1984 season? The track operators could not negotiate favorable lease terms for the property at the close of the season, the property owner saw the hunk of land as being far more valuable as something other then a drag strip, and basically that ended the track’s life. It has been closed ever since. In 1994 a group tried to revive it was a strip but was unsuccessful. Today the land is still for sale and there’s not a damned thing on it.

Cool Photo Compilation: Images From The Infamous 1963 Indoor Drag Races In Chicago - Cool History 12 Seconds To Dumb Ass: Watch This Mustang Spray His Friend's Truck With Rocks and Blow The Windows Out