Don’t Call It A BRAT: This 8-Second Subaru Brumby Is Sick! 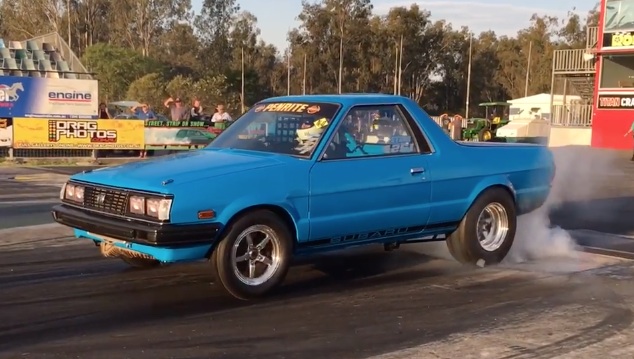 The Subaru BRAT: The one coupe-utility that was sold in the States that isn’t often thought of. Memories of a strange little pickup with jump seats in the back to circumvent an archaic tax have pretty much come and gone. There are the dedicated fans, of course, but honestly we can’t remember the last time we saw a BRAT out in the wild in any kind of condition. Usually, the tin worm ate these little pickups up, and if they didn’t rust into oblivion, they were beat to death and left to die in the yard.

Over in Australia, the little Subi trucks are known as the Brumby, and while we can’t speak for how they are treated over there overall, in the best Aussie tradition, there is at least one example built to the hilt, ready to race any and all comers, and this little monster is it. Under the hood is an EJ25 flat-four with a Garrett GTX turbo, a Powerglide, and a Ford 9-inch out back. After that…well, we’re interested, because we didn’t expect to see a Subaru-powered Subaru pickup truck clipping the 8-second zone ever.

Team Racepak! If You Are A Racer Wanting Exposure and Racepak Sponsorship, Here's Your Chance Video: The Basquez Roadster Does It All On The Salt, On The Strip, And At The Show

One thought on “Don’t Call It A BRAT: This 8-Second Subaru Brumby Is Sick!”