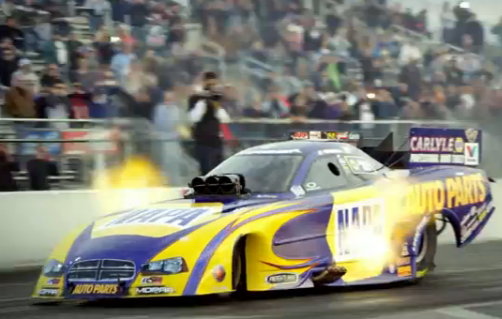 During the 2014 PRO Winter Warm Up, Chad and I weren’t the only two guys filming the action from above the track. A film crew from Oakley was there to gather footage for a series of upcoming short films about Don Schumacher Racing’s nitro teams. As you may or may not know, Jim Jannard who founded Oakley also started a company called RED which produces some of the finest digital video cameras in the world. This video was all shot on RED cameras and the crew had some truly cool stuff like a quad-copter rig that they used to get the directly overhead shots you’ll see and a completely bad ass camera rig that zipped back and forth on a cable about 20 feet in the air. That camera could achieve speeds of close to 30mph and while you see some slower panning shots with it in this quick video, we ‘re certain that the next video that comes or one soon to follow that will have more from that very inventive perspective. I saw one of the guys on the plane when we were leaving on Sunday and while I only had time to blurt out, “did you get it?” and he excitedly said, “DUDE! WE GOT IT!”

As you can imagine, RED cameras are not cheap. They’re also not really meant to be wasted on people who don’t know what the hell they are doing. This is professional grade equipment designed to be used by professional grade shooters. While I am not sure the crew guys were all drag racing fans, they certainly arrived with a plan on how and where they were going to shoot from. There are lots of quick clips edited in for this 1:30 film and we think it tells a story well. How much does RED equipment cost? If you have to ask that question, you can’t afford it.

It is important to note that Jannard has been into drag racing for a very long time. He was the primary sponsor of Scotty Cannon’s pro mods and nitro funny cars for years through Oakley and now the company is producing the safety gear that Schumacher Racing drivers are wearing along with lots of crew apparel. Sunglasses, insane professional level camera equipment, what’s Jim Jannard have up his sleeve next? We have no idea but we can’t wait to find out!

Someone In Iowa Is Daily Driving A 1980 Bradley Electric GT II - We Have Photo Proof Craigslist Find: This 1970 'Cuda Packs A Hemi, Cool Old Race Paint, And Some Giant Rear Slicks