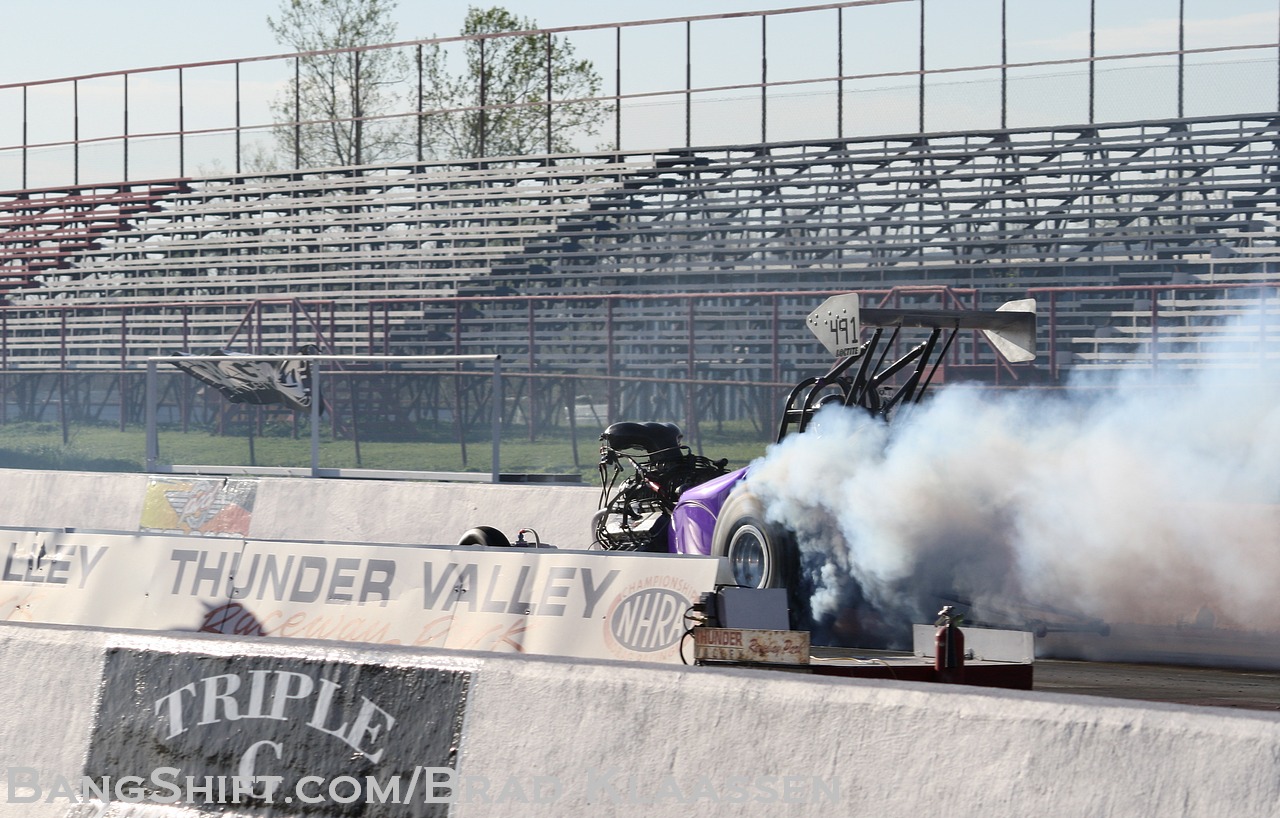 (Words and photos by Brad Klaassen) -I remember the day nitromethane, methanol, and high octane racing fuel brought Thunder Valley Raceway Park (TVRP) near Noble Oklahoma to life on May 30th, 1992, because I was there. On that day TVRP became Oklahoma’s second operating quarter mile drag strip next to the long standing strip at Tulsa that is currently being successfully managed and operated as the Osage Casino sponsored Tulsa Raceway Park. The grand opening celebration at TVRP dubbed the Nitro Nationals boasted a car count of almost 400 drag racing machines. Additionally, because Noble, Oklahoma is only a short cow patty toss from the major metropolitan area of Oklahoma City and all its suburbs, the brand new all concrete quarter mile drag strip had no problem drawing 20,000 plus race fans starving for some high speed entertainment to its opening event. It also didn’t hurt that for the inaugural event the track brought in big time hitters such as nitro funny car racers John Force, Jim Eppler, Johnny West, and top fuel racers Eddie Hill, and Oklahoma’s own Jimmy Nix for some high speed nitro match racing runs. The alky ranks were also well represented that day too by the likes of Pat Austin, Randy Anderson, and Todd Simpson along with Chickasha Oklahoma’s own Jackie Stidham in their Top Alcohol funny cars. Blaine and Allen Johnson came all the way from the west coast to run along side Tom Conway from Seminole, Oklahoma in their Top Alcohol rails. Oklahoman Mike Edwards was there that day too in the Nickens Brothers Castrol sponsored B/A Comp Eliminator door slammer to help put on a great show.

or continue reading to learn the whole story of how nitro is helping to bring Thunder Valley raceway back!)

Thunder Valley Raceway Park wanted to keep their fans revved up going into Oklahoma’s wild and wacky winter, so they hosted an October 1992 Pro Stock Shootout featuring Warren Johnson, Gordie Rivera, Bruce Allen in the Reher & Morrison ride along with Jim Yates, Larry Morgan, and Harry Scribner. Thunder Valley also became an annual stop for the NHRA Division 4 Sportsman Series and still hosts that event annually to this day. This brand new baby of a drag strip had a full load of adrenalin to deliver and anyone who attended an event could smell the excitement.

In the summer of 1994 TVRP keep their accelerator pedal of high speed entertainment matted by hosting a Super Chevy event that brought out epic door slammer action and a bitchin car show to boot. Such notables as Dyno Don Nicholson and Retired NBA star Tom Hammonds made passes down the lanes at Thunder Valley. Pro Mod heavy hitters Jeff Brozovich and Mark Carter “the flying fat man” from Okarche, Oklahoma helped make this another win for the strip. It seems nothing could slow down the fever pitch excitement being delivered by TVRP. In June of 1999 the track hosted the Oklahoma State Championships for Harley Powered two wheel fun that featured high speed nitro excitement courtesy of Oklahoma drag bike legend Marion Owens and his twin engine nitro Harley drag bike.

In 2000 TVRP shifted into high gear and headed for the top end unafraid of the Y2K scare knowing everyone would live to race down their strip for another decade and they did. The track’s bracket racing series remained strong with good car counts and fan attendance and the NHRA Division 4 Sportsman show continued to draw big crowds. But, as the years marched on and the economy began to sour, drag racing funds for both racers and fans began to dry up like an Oklahoma farm pond in the middle of one of our scorching summers. TVRP went through several changes in management during the next few years trying to regain the perfect tune-up they’d been using since 1992. So, the crowds thinned along with the drag machines and the track facilities suffered as well. Management began only running eighth mile racing on the all concrete quarter mile strip in an effort to limit cost for racers and increase car counts and recoup fan support, but the track that once hosted epic events for both racers and fans in the 90s was still having trouble hooking up.

A few months back I began hearing rumors that the drag strip that once rocked central Oklahoma was once again going to go through management changes and this time they were going to tune that baby up with some nitro. It seems the new crew at TVRP had this crazy idea that if you burn some nitro and methanol at your track they will come. Hey, that’s how this track came to life in 1992, so why couldn’t it work again. Their plan might just be crazy enough to work, like running 98% nitro in a motor with way too much boost and not blowing the thing to Jupiter. Well, folks in my opinion it did work and is the perfect beginning for the rebirth of a drag strip.

You see, the brain trust at TVRP decided to kick off their 2013 season by hosting the Painless Performance Products Outlaw Fuel Altereds Association (OFAA) on Saturday, April 20th. These guys and gals have been around for 17 years and know how to put on a show! They hadn’t made an appearance at TVRP in 10 years, which meant the lack of thunder in the valley that TVRP’s strip lays in left its fans way overdue for a nitro and methanol fix. The Outlaw Fuel Altereds are also a perfect match for Thunder Valley because in an effort to make their style of racing more affordable for the teams, the OFAA only make passes to the 1/8th as well, and their formula for success must be on point or they wouldn’t still be running strong and putting on full field shows all over these parts for the past 17 years. Okay, so I’ve got to admit I’m not a huge fan of 1/8th mile racing. Heck, if you’ve got a perfectly good all concrete 1/4 mile strip use it, right? Well, let me tell all you haters out there, myself included, I put on the best t-shirt I could find and it wasn’t even a drag shirt and headed down to the valley. I hadn’t been to the drags in so long I didn’t have any drag t-shirts left in my closet. However, on a side note, I did wear my OKC Thunder NBA t-shirt because they rock too. Hmmm thunder seems to be the theme today, so that last comment should work.

Anyway, I headed down to Thunder Valley to take in some Outlaw Fuel Action and huff some fumes. Ladies and Gentlemen, let me tell you something. In my humble and often feeble minded opinion, fuel altereds belching nitro or methanol running at any distance on any track will bring back a drag strip that was in the ICU on life support back to life faster than John Force can talk during a top end interview. While some of the Painless Performance Products Outlaw Fuel Altereds only run methanol and others run nitro of varying percentages, all cars are very evenly matched per the OFAA rules and many are capable of deep 3 second passes in the 1/8th at speeds nearing or exceeding 200 mph! If witnessing action like that doesn’t rev up your heart rate, then you’d better check your pulse because you must be dead. This is also the exact kind of drag racing action and track management that will place TVRP back on top of the ladder for both Oklahoma drag racers and fans. The staff at Thunder Valley Raceway Park should give themselves a gold Wally for putting on this event. I had a blast and just like many other fans of TVRP are sure to return for more exciting racing action this season and for years to come, and the rebirth of a Oklahoma drag strip will be complete. 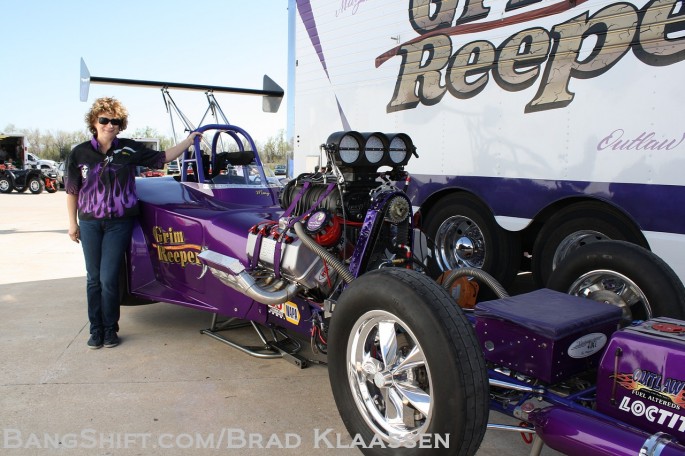 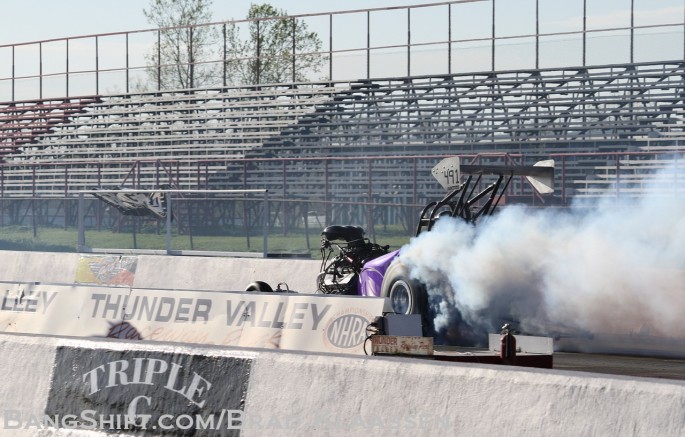