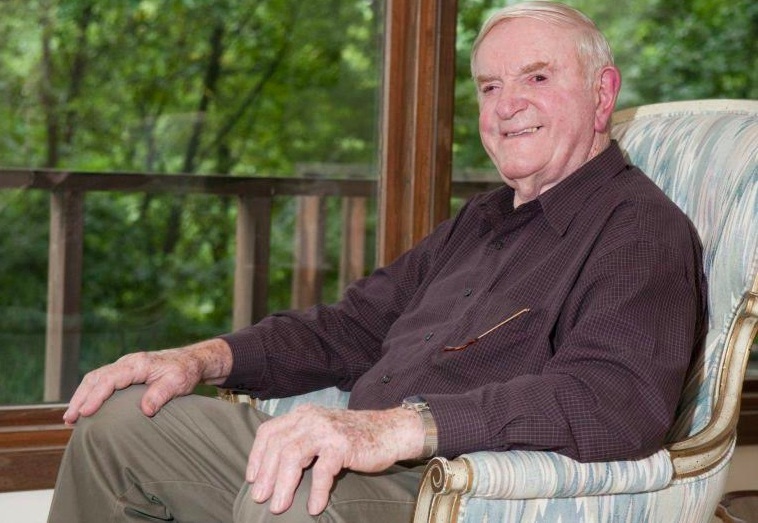 (Bret Kepner) – Robert J. “Bob” Bartel will forever be known by some as the man who built Quad City Drag Strip in the tiny hamlet of Cordova, Illinois. To others, he was the creator of what would become the sport’s oldest event, the World Series of Drag Racing. History shows, however, Bob Bartel was one of the sport’s founding fathers and, in fact, was responsible for the early growth of a global sport and its superstars.

Bartel’s involvement in motorsports, (and drag racing in particular), began long before the gates opened at his quarter-mile strip along the Mississippi River. The Moline, Illinois, native was integral in the creation of a drag racing association with truly national scope. In 1953, as the fledgling, (and strictly regional), National Hot Rod Association staged its first drag race. Also in 1953, 31 year-old Bartel and Jim Lamona began hosting races with their Automobile Timing Association of America, (ATAA), which quickly attracted a sizeable number of drag strips to its ranks while the NHRA was struggling to break out of California. The NHRA was dedicated to posting only trophies and contingency prizes but the ATAA paid cash purses and became an instant hit with contestants.

In 1954, the NHRA organized its first Safety Safari national tour to gain support and sanction tracks across the county but, simultaneously, Bartel and Lamona worked to hold the sport’s first truly national drag racing championship on a taxiway at George Field in Lawrenceville, Illinois. In October, 1954, the World Series of Drag Racing was born one year before the NHRA, (or any other organization), had a similar race. Despite a very brief lead time for advertising the race, the first event drew competitors from as far away as California and New York in an era was traveling by road was not easy. The “World Series” remained at Lawrenceville, (moving from the taxiway to a full runway when the number of entries and spectators demanded it in 1955), for two more seasons.

Meanwhile, Bartel was expanding the sport’s horizons in other ways. Knowing well the massive crowds which assembled for the week-long celebration of speed each February on Florida’s beach known as Daytona, Bartel and close friend Ed Otto, a legendary promoter in his own right, brokered a deal with Bill France, Sr. to bring drag racing to the National Association for Stock Car Automobile Racing. Bartel and Otto staged major events under the NASCAR umbrella and produced a specialized drag racing branch of NASCAR which continued to sanction drag races all over the eastern seaboard for another fifteen years.

Bartel was a lifelong member of the Moline Moons car club, a group of enthusiasts which formed in the late 1940s. He was dismayed by a growing street racing problem in his hometown which not only dominated the headlines of the local press but eventually led to the fatalities of several of his childhood friends. Since the nearest tracks were across the state in Chicago, Bartel posed the possibility of a purpose-built drag strip in the Quad Cities area paid for and operated by a union of local car clubs. The expense proved far beyond the capabilities of the members, however, so Bartel took on the challenge.

With the help of a several businessmen in the Quad Cities towns of Moline and Rock Island (Illinois) and Davenport and Bettendorf (Iowa), Bartel cashed in some of his stock holdings in the Sears & Roebuck Company and purchased several acres of land a mere two-thirds of a mile from the Mississippi River. Owned by the Sullivan family who decided to sell some of their farmland after a particularly profitable growing season, the plot of river silt was worked into a suitable base for a new track.

The Quad City Drag Strip opened on Labor Day weekend, 1956. After hosting a very successful ATAA North Central Regional Championships late that season, the track needed to be completely resurfaced when the new asphalt shifted. Again, Bartel paid for the revision out of his own pocket. Meanwhile a government mandate in late 1956 forced many airports to cease all non-aviation functions, meaning the World Series needed a new home. The weekend before Labor Day on 1957, the first of sixty consecutive World Series of Drag Racing championships were held at a track which would go on to be operated as Cordova Drag Strip, Cordova Dragway and Cordova Dragway Park.

Bartel proved a marvel at working with the local media who jumped on board en masse at the thrill of hosting a national championship drag race. In a stroke of genius, Bartel arranged to have the winner of the most popular television show in the nation, “The $64,000 Question”, at the facility for the entire race. The winner answered the query, “What is the official distance of an automobile drag race?’ to earn the current equivalent of $560,000 and become the best-known game show winner in history. Even the local media admitted as many people came to the track to meet the TV personality as came to see the drag racers.

Bartel keep his hand in national drag racing promotion. He continued to host major drag racing championships at different facilities in the state of Florida through the 1960s. Bob’s involvement with Lamona at the ATAA ended in an unusual fashion when the NHRA, which sanctioned fewer tracks than the ATAA at the time, “absorbed”, (bought out), the ATAA in 1957, a takeover which required the vast majority of cash assets of the NHRA. As soon as the sale was complete, Bartel created the National Association of Drag Strips, the acronym of which was a sideways swat at the increasingly dominant NHRA and the fact few people had the gumption to compete against the Californians. The new group went on to sanction dozens of tracks in the Midwest and East Coast though the 1960s and eventually owned outright all drag racing in the greater Chicago area.

Bartel possessed an enviable streak of diplomacy which allowed him to successfully operate with a variety of diverse partners in drag racing’s most caustic era. In fact, his Cordova facility hosted events from a staggering nine different drag racing associations over its life to date. He was able to maintain exceptional relations with the equally successful owners of nearby megatracks including Ron Leek of Byron Dragway, Bob Metzler of Great Lakes Dragaway, Ben Christ of U.S. 30 Drag Strip and others. He remained a hands-on track owner and kept the World Series of Drag Racing relevant through every era of drag racing’s ever-changing landscape of attractions.

Bartel was the first to offer a true National Title for Funny Car competitors. When Cordova’s surface was washed out by floods in the summer of 1968, Bartel shortened the World Series distance of competition to a thousand feet for the fastest classes, a decision which would be repeated exactly forty years later. He embraced jet-powered and rocket-powered drag racing machines, wheelstanders and other “fringe” classes as true competitors and offered each honest competition at the World Series every year.

Bob loved his racetrack. Although he eventually sold it to racer Bob Gipson in 1986 and to racer Scott Gardner in 1996, he was always in attendance at major events. While Bartel was surprised when the International Hot Rod Association purchased the facility in late 2014, Bob hoped the association’s owners, IRG Sports + Entertainment, would treat the facility with the respect it deserved. However, IRG made a decision which affected the one thing Bob loved more than the race track. IRG stripped Cordova International Raceway of the World Series of Drag Racing.

IRG made the incomprehensible decision to move the entire 2016 World Series of Drag Racing to another IRG-owned facility, the struggling Memphis (TN) International Raceway, on its traditional final weekend of August date. The decision emotionally crushed Bartel and it left the Quad Cities region reeling at the loss of the financial impact of its largest motorsports event. Incredibly, Cordova International Raceway sat dormant on the date of the race. The Memphis World Series of Drag Racing followed the predictions of nearly everybody in the industry. It was a financial bloodbath and a disaster of record proportions in the annals of the sport.

Not surprisingly, Bartel was one of many who felt some form of vindication when IRG returned the event to Cordova in 2017. While the track lost its title of oldest event to have never been moved from its original site, it remains drag racing’s oldest annual event. For many years, the race was the largest independent drag race on the planet and is the IHRA’s only event which features professional drag racing machinery.

At 96 years of age, Bob Bartel was able to attend the 2017 World Series with the real love of his life, wife Dawn, to whom he was married for seventy-one years and who was at his side when he passed on February 18, 2018. He was a wonderful husband and a loving father. As much as he loved his family, however, Bob Bartel equally cared for the four generations of racers and fans for whom he was responsible in his amazing life as caretaker of the World Series of Drag Racing flame.

Bob Bartel was a true pioneer of organized drag racing. Don Garlits proudly states he was “nobody” until his semi-final victory over Emory Cook at the 1957 World Series of Drag Racing. Through 2016, Illinois racer Dave Jamison attended or competed at all but the 1955 World Series; he went to the inaugural but, at age fifteen, he didn’t have the money for admission to the second annual. He never missed another. 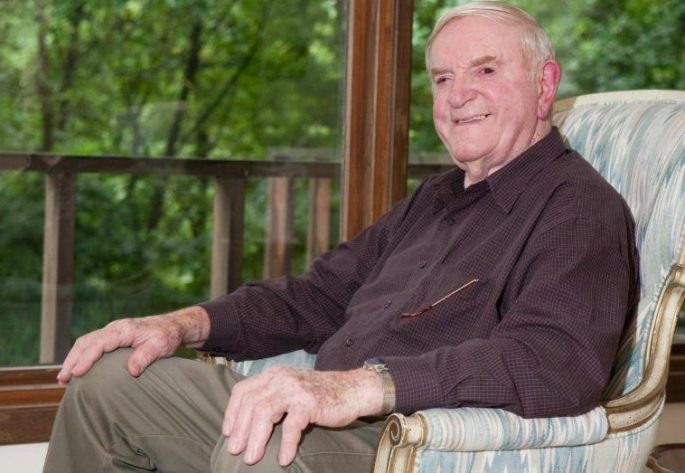 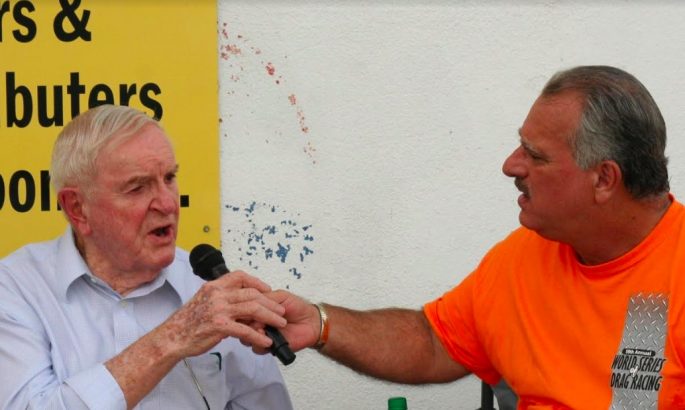 BangShift Question Of The Day: How Many Uses Can You Come Up With For An Old Limo? Hot Rod Haulers! Place Your Bets Between The 1UZ-Powered Flatbed And the 1JZ-Powered Van!