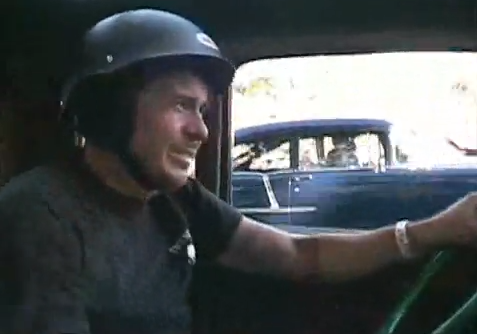 This is one of the most bitchin’ drag videos we’ve seen in some time. The footage was taken at the Kontinentals Day of the Drags in 2007. Day of the Drags is an event that Charles Wickam has been covering for us every year and it is a fantastic gathering of old school drag cars and hot rods battling it out on the strip at Little River Dragway in Texas.

This particular video shows a great little Ford hot rod powered by a blown Chevy small block that’s backed by a four speed manual transmission. The driver pulls to the line and waits for a challenger. That combatant shows up in the form of a nice blue ’55 Chevy. The camera angle and audio are bad ass here. We’re able to see an awesome see-saw battle back and forth down the strip as both cars vie for the lead. Anyone who has ever been in a door handle to door handle drag race at the strip can relate to how awesome it is, especially if you come out on the winning side.

The dude in the ‘rod does a good job hammering the gears…but does he have enough gusto to get to the finish ahead of the ’55 Chevy? You’ll have to watch to find out!

Thanks to Caveman Tony for the tip!

She's A Little Runaway: Watch This Old Ford IDI Diesel Run Away While Hooked To A Sled And Pull Like A Boss! In 1984 The Mustang SVO Provided A Glimpse In The Turbocharged Future