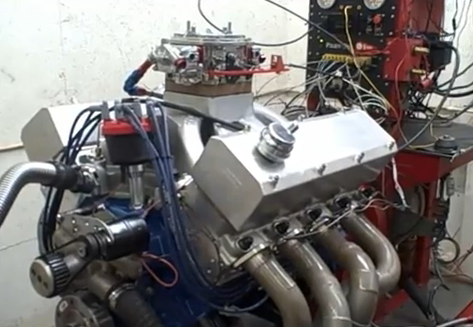 Well here’s one that the Ford boys car throw back at all those Chevy rat motor devotees. In this dyno video from Precision Racing Engines, you’ll see a single four barrel equipped big block Ford engine that displaces 605ci makes over 1100hp and something like 800 lb/ft of torque on the dyno. The mill has Trick Flow Heads on it but we’re not sure about the rest of the component list, although we’re pretty sure that the dudes at Precision would be more than happy to built you a copy for the right price. Hey, it is no secret that there is big power to be had with a properly constructed Ford fat block. There’s at least one guy that we know who has a BBF that makes over 1,000hp on pump gas and has lived through Hot Rod Magazine Drag Week. The Chevy rat motor gets more press, but the big inch Ford seems to be every inch its equal when used for an all out build.

The horsepower and torque produced by this engine would be perfect for a drag race application as the peak torque happens at 5600 RPM, so this thing could be up on the tire and really making some steam shortly after leaving the gate. Not that it has any bearing on the functionality of a particular combo, but this big guy sounds like 10 kinds of bad ass at 7,500 RPM and all the way up! We need more big block Ford in our lives around here. Chad and I have been trying to figure a way to scratch that itch. Since he is allergic to blue ovals, I think the job may fall on me. This 605ci monster serves as some serious inspiration!

Watching This Big Rig Rip Donuts And Wipe Out A Fence Is Highly Entertaining, Unless You're The Fence More Vintage Drag Ads From the Pages of Drag News, Circa 1969