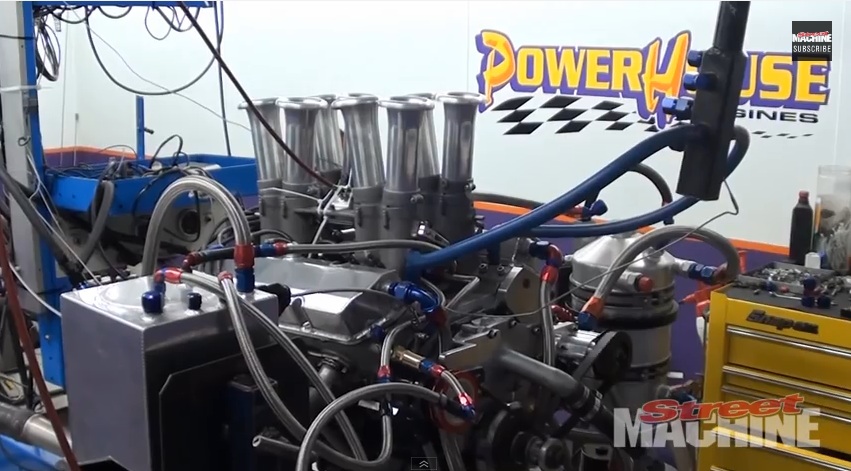 Whether we’re talking about American engines, English engines, or Australian engines, some are beloved and some are unloved. The funny thing is that the line can be pretty thin between legend and lumpy. In the USA we have the venerable Chevy 350 and its slightly smaller cousin, the 305. The 305s chokingly small bore precludes heads with any sort of decent valve sizes in them so it is pretty hamstrung. In Australia they have the Holden 308 which is the engine people build with regularity and then there is its younger brother, the 253 which takes on the role of the doggish 305 when they are compared. Thankfully there are guys all over the world who aren’t bound by logic or good sense and they do stuff like what you will see in the video below.

This stack injected 253ci Holden V8 makes 515hp on the engine dyno at well over 7,000 RPM and while it looks good on the dyno, it makes a living powering a nasty Aussie burnout machine. The funny thing is that we sometimes cringe when the RPMs get big on the dyno but that is really small potatoes when compared with the wanton abuse that this little engine takes when the driver has his right foot glued to the floor during a burnout contest.

It is always cool when people don’t feel the need to follow the herd and do something different. This is a clear case of that and further proof that there’s lots of ways to make and old girl really sing!

Vintage Carnage and Gearhead History: Wreckage and Cool Photos From the 1950's This Is An Amazing Compilation Video Of People Crashing Their Cars On The Nurburgring In 1970