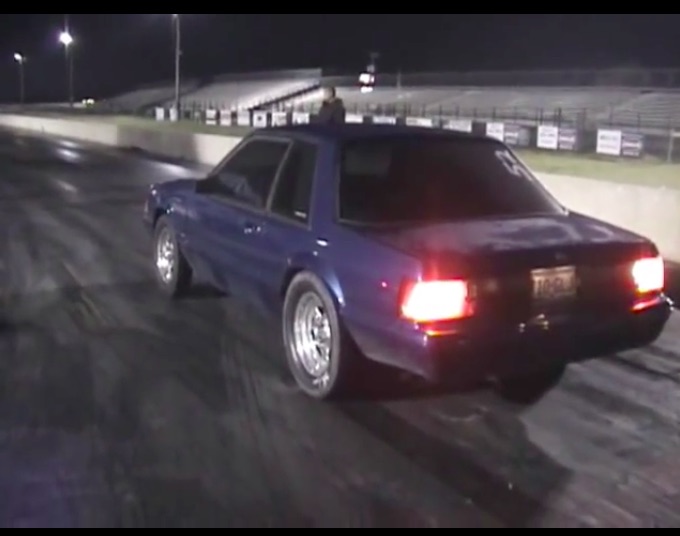 This is the type of car that announcers love and track prep guys/starters hate. Why? Us announcers love iron like this because it leaves like someone lit of a JATO rocket and starters hate it because it rips bald spots in the starting line rubber because of how violently it shocks the tires on the hit. Outside of all that stuff, this guy can REALLY drive this car. We’ve heard plenty of quick shifting drivers over the years here on BangShift but this guy is in the top couple precent for obvious reasons. You’ll watch this one multiple times like we did to enjoy both the hard leave and the shifting skills of the driver. The car is cooly unassuming as well. Plain paint, nothing really jumping out, but holy cow is it violent and awesome. DO WANT!

I don’t know much of anything about the car other than the title of the video lists it as having a 347 stroker engine. The transmission is obviously not a T5 because that weakling would have barfed guts at the mere suggestion of the launch and powershifting demo you are about to see below.

PRESS PLAY BELOW TO SEE A MUSTANG DRIVEN BY A REAL STICK SHIFT MAVEN!

This Is An Amazing Compilation Video Of People Crashing Their Cars On The Nurburgring In 1970 Riding Up Pikes Peak on the Roll Bar of a Screaming Chevy Equipped Cobra Will Make You Want To Carve Corners Today!