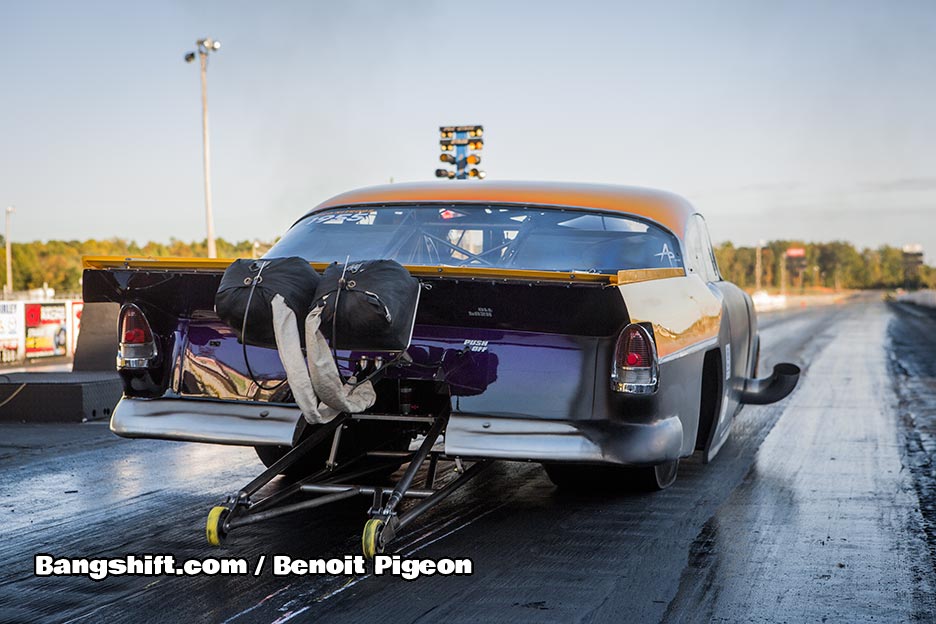 (Words and photos by Benoit Pigeon) – Once again, the Extreme Outlaw Pro Mod organization was racing at Piedmont in North Carolina this mid October at the famous home of the Big Dog. This time the big check was above average with $15k to take for first place. More cars were expected than usual and this event was set as a 16 cars field. I arrived on Friday just as testing was going on and snapped a bunch of images at the then quiet facility.

Evidently the storm was brewing and by race day tension was high, particularly regarding the advantage debate between blower and nitrous cars. Not that this is new, but some regions where pro mod is raced may not see the old debate from time to time re-surface as brutally as this part of the south, but after all this is a rich historical place for very fast cars and the cool air that brings fall also brings the old ghosts back. With cooler air, the fastest blower cars can really shine and possibly grab the title. Five showed up but by the time the race started, Galot team had lost two of it’s three cars. Young Ty Tutterow who was blowing his personal record with each pass lost his motor on the last qualification pass. Already, Kevin Rivenbark had lost his own motor the day before on his Corvette during testing but same day, jumped in John Strickland’s Camaro who was racing at a near by tractor pull and started a string of low 3.70’s.

On race day, Kevin would not go slower than 3.74, with a couple 3.71. Eventually, Kevin took the win in the final against Cox and his Bryant Cranes Buck racing powered nitrous Camaro. Short of getting the big check, Jay Cox who qualified #2 behind Rivenbark took advantage of his runner-up place to take his number one spot at the EOPM series a little farther away from his competitors.