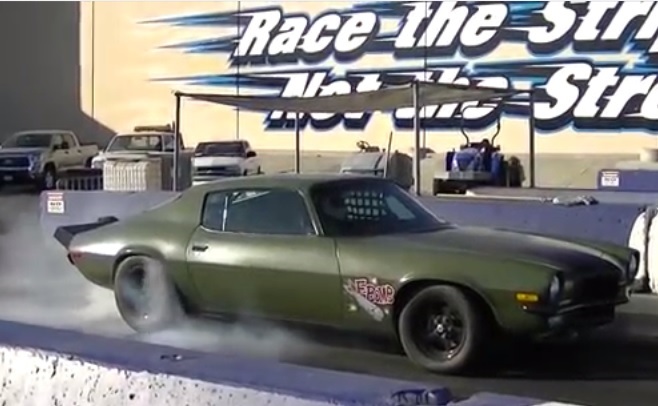 Controversial, reclusive, mind-bendingly fast, and finally back among the living, Freiburger’s F-Bomb Camaro has been many things to may people. It had a role in a Fast and Furious movie, it collected dust for several years, I still get to brag that I drove it back when it was “new” and now you get to see this neat Nelson’s Racing Engines video that Tom and the boys put together that shows footage from 2008 when the engine was first being dyno tested and footage from not too long ago when it was at the track trying to run into the 8s with its 1,500hp 406ci small block Chevy.

Yeah, you may scoff at “trying to run in the 8s” when we live in a world that now consists of 5-second street legal car but this thing is definitely a rocket ship and I think I speak for lots of us that it is cool to see it back on the track and making noise. It was always kind of a bummer to hear the F-Bomb brought up and then the talk was how fast it might be, could be, or should be. Now we know that it can run 9.0s at more than 150mph with more in the tank.

The one thing that’ll crack you up is Freiburger’s on-camera look from back in 2007/8 at Nelson’s shop. I sense an email coming about that but hey, I didn’t make the video I’m just directing people to it! I’m a victim of circumstance! One thing I’ll have to confirm with David is in regards to the orange shirt that can be seen under his jacket. Chances are that was a Car Junkie TV shirt which was the site that later morphed into BangShift. Ahhhh memories!

Now equipped with a TH400 transmission in place of the Powerglide that was initalled installed in the car, the engine remains the same one with it s beautifully bent lines and curvy turbo piping that had all of our tongues hanging out back in the day. A little older, a little wiser, and damned fast, the F-Bomb roars here.