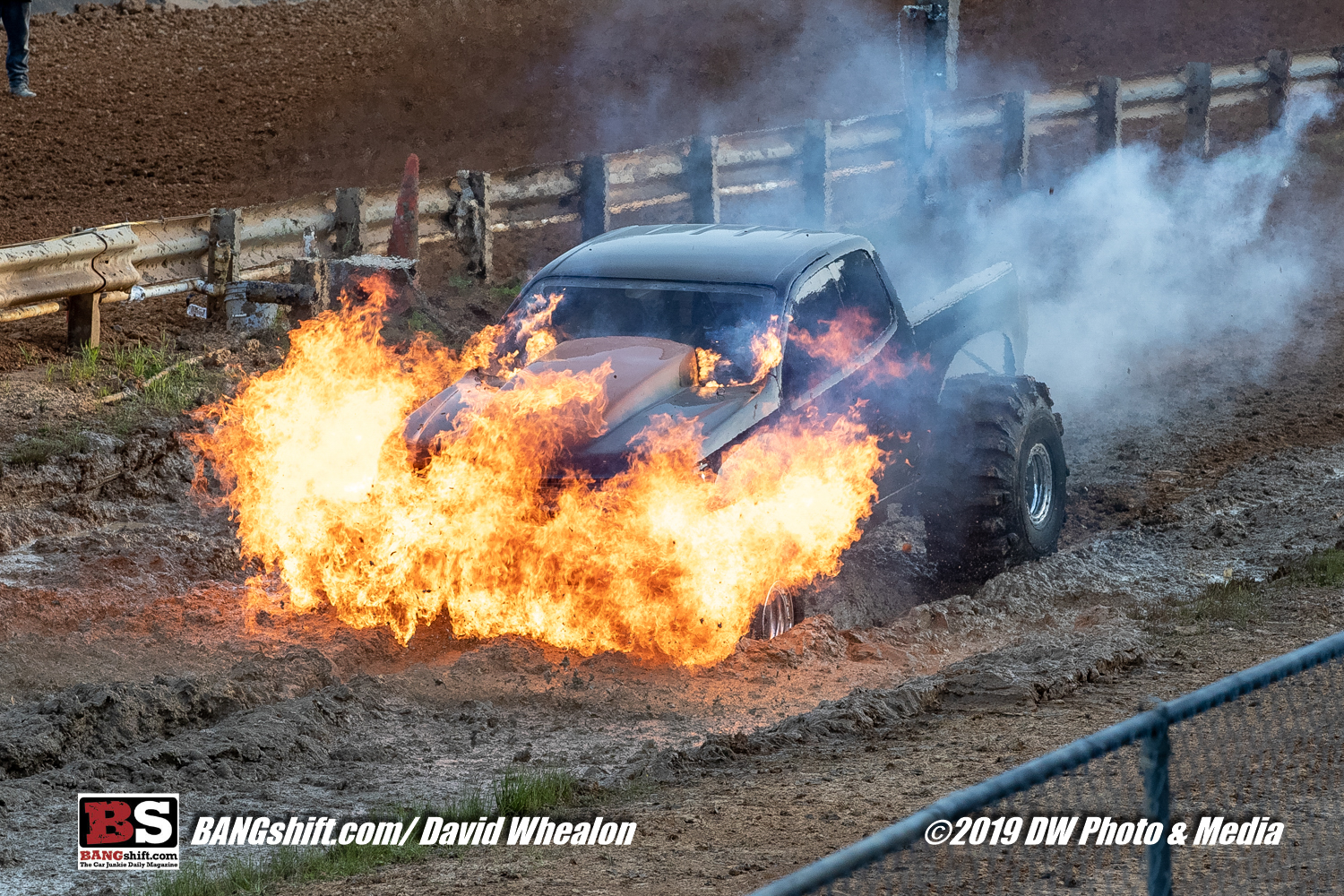 (Words and photos by David Whealon) – If you like massive horsepower coupled with flyin’ dirt or tenacious sloppy mud you’re gonna dig this. The Lee County Mud Motorsports Complex had the best of both worlds together in one awesome show of slingin’ fun this past weekend with the “Blown Alcohol Madness” Dirt Dragsters running in conjunction with the “Fastest of the Fast” Hill N’ Hole Unlimited Mud Racers for the first time ever at the massive facility tucked away in the boonies in Sanford, N.C. In years past LCMMC hosted these two premier classes on separate dates as stand-alone events but owner Darryl Jones decided to match up these two forms of dirty fun to give the fans an opportunity to witness two forms of the sport on the same weekend. The Blown Dirt Dragsters ran their competition on 160’ of meticulously manicured red Carolina clay with Cut tires on Friday and switched over to Paddle tires for the Saturday matinee. On the other side of the spectrum, the Hill N’ Hole pit was 250’ of dense sludgy muck that was skimmed coated after every third pass to a nice gleaming finish to enhance the competition.

The Blown Dirt Dragsters were afforded two passes on each type of tire and the times were fast and record setting. In the Open Cut Class Paul Wesinger took his “Paperboy Express” to the win with a 1.909 second blast. And in Saturday’s Open Paddle Class, Dan Richter with “Richter Scale” blistered the 160’ with a track record pass of 1.776.

In the Hill N’ Hole pit the Unlimited  “Fastest of the Fast” clash was one for the ages. In the Unlimited class it’s a run what you brung class with multiple power adders. Supercharger, Turbos, Nitrous and even Diesel power is allowed. With only 2 passes through the muck for each truck, the Musi Powered Nitrous Mudtruck “that POS” of Trey Moody held the trophy after the first round Friday night with a pass of 4.059 only to hand over the hardware on Saturday to the Denny Kerley Dodge “Rowdy Snoot”. The Todd Tutterow prepared BAE Noonan 521 Hemi propelled Kerley to a lightning quick pass of a 3.751 second blast.

On a side card of muddy action the class of Open Leaf Spring was added in with Larry Corbiel taking the win.

Somernites Cruise Coverage: A Photo Collection Of Camaros and Firebirds From the Event! This 1937 Chrysler C-16 Royal Is A Literal 80+ Year Old Daily Driver - An Unrestored Marvel Of A By Gone Age

One thought on “Mud Chuckin’ Action Photos: Blown Alcohol Madness and The Fastest of The Fast At Lee County Mud Motorsports Complex!”