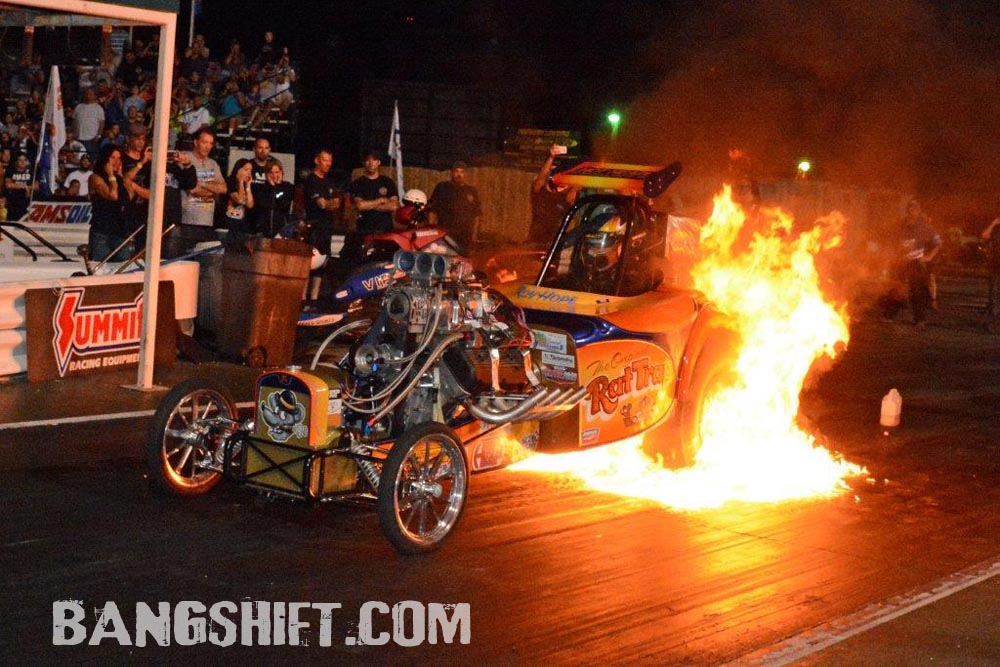 When we heard that the IHRA Summer Nationals at Cordova Dragway Park is the most anticipated IHRA national event of the season, it was time to pay attention.  There were a couple of us who watched the awesome qualifying sessions on the IHRA live feed, but with the entire 8-car field in the 5-second range, this could be a killer event for nitro funny cars, fuel altereds, nito Harleys and Pro Stock.

While we were watching the online video feed, it looked like a huge crowd was entertained and potentially thousands more around the world were watching live via the webcast. 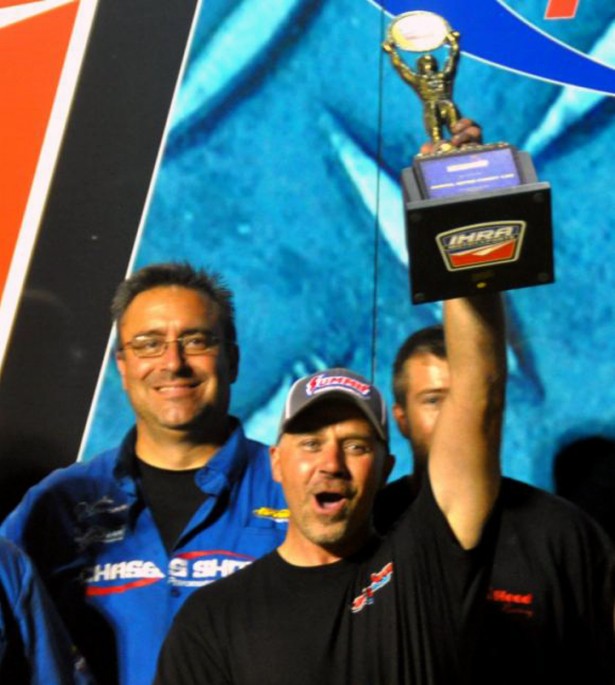 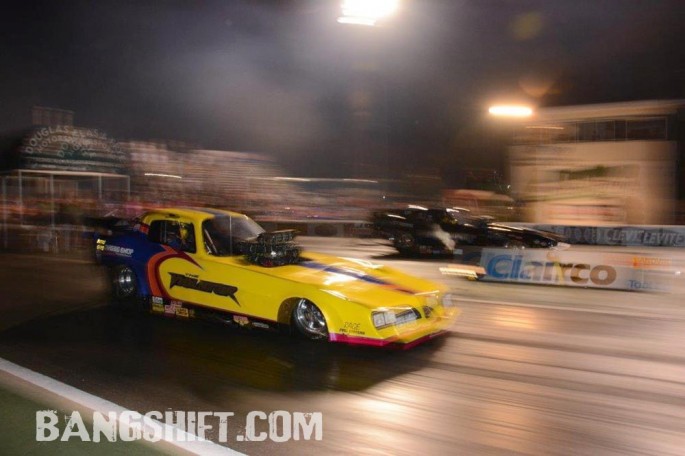 Bowen (near lane) won a final round thriller over Jason Rupert in Nitro Funny Car, his first in the IHRA Nitro Jam Drag Racing Series, while Goforth won for the first time since 2009 in Pro Stock to lead the way at the IHRA Summer Nationals at Cordova Dragway.

Bowen’s victory over Rupert in the finals of Nitro Funny Car proved one of the most exciting six seconds in the history of IHRA’s brand new Nitro Jam Drag Racing Series. Bowen was the 2013 champion in the Drag Racing Online series and Rupert, one of the most dominant cars in the sport is a two-time NHRA Heritage Series Champion and a four-time IHRA national event winner this season.  Both drivers were early favorites entering the weekend and emerged as the final two contestants following a brutal weekend that saw more than a dozen drivers battling for one IHRA Ironman trophy. 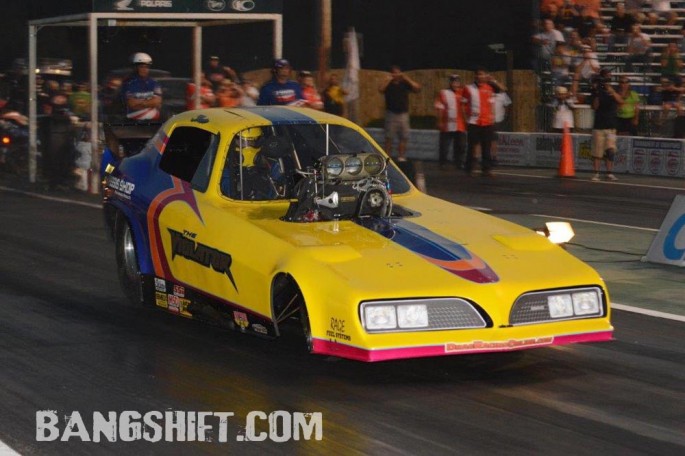 With the world watching, Bowen and Rupert put on a show in the finals of the nitro-burning nostalgia class with Bowen grabbing a narrow starting line advantage in the “Violator” 1977 Pontiac Firebird and turning that into a holeshot victory. Bowen crossed the finish line first with a 5.846-second pass at 244.74 miles per hour, besting Rupert’s quicker and faster 5.824 at 245.32.

“What a win and what a way to finish the weekend. To race Jason, I mean look at his track record. He is the most dominant car out there right now and to win against him means a lot,” Bowen said. “Even with his impressive resume, I tried not to think about it. I went out there, tried not to focus on my opponent and pictured my win light coming on. I try not to get worked up during a run, I just focus on what I need to do. When it left, it was going toward the center and I had to pedal. I reeled it back in, but I could hear him the whole way. When I saw my win light I thought, wow, how great is this.”

Bowen’s victory was far from an upset as the Grand Blanc, Michigan driver placed the “Violator” Pontiac Firebird  squarely at the top of the time charts after two rounds of qualifying on Friday. 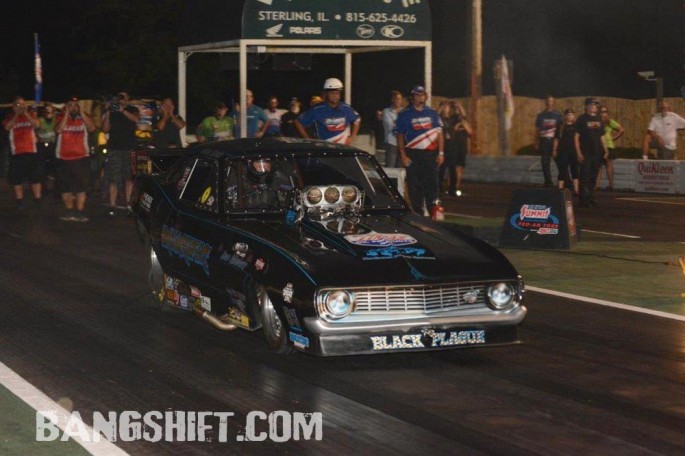 On Saturday, however, Rupert fired back during the second round of eliminations with a head-turning 5.700-second pass. With both cars showing their hand early, it was truly anyone’s game when the green light lit for the final time.

“In the semifinals Rupert ran that 5.70 and I thought, wow, this is going to be tough. To make matters worse, we slowed down from our first round and didn’t really know why. So we hopped it up for the final and went to work,” Bowen said. 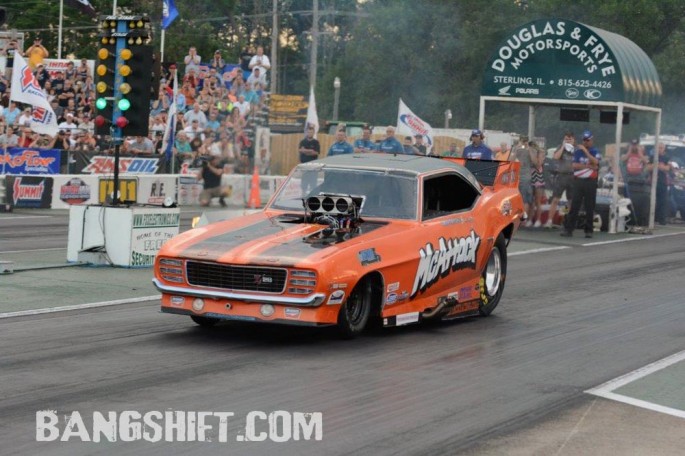 Bowen collected wins over Mike McIntire Jr’s “McAttack” Camaro  and Paul Romine’s “Man O War” Mustang on his way to the final, winning both with relative ease with passes of 5.780 and 5.852.

“I have been preparing myself for this race for the past few weeks. I came here just wanting to qualify and go a couple of rounds, those were my expectations,” Bowen said. “We qualified No. 1 and I really didn’t expect that. Then we ran really good during first round and I thought, hey, we might have a chance.

“We don’t race a lot, so this was a great opportunity to come here with all of these guys and see where we stand. It is awesome to actually come away with the win.” 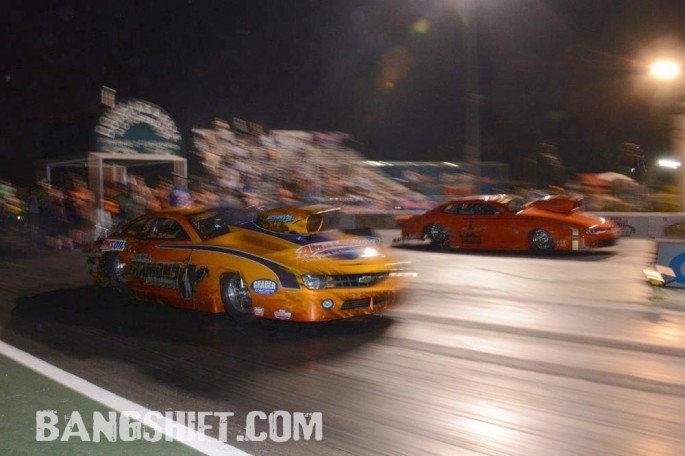 Dean Goforth (far lane) collected Saturday’s other big win as the veteran racer out of Holdenville, Oklahoma drove the Dean’s Casing Service 2014 Chevrolet Camaro to a surprising win in Pro Stock. Just a few months removed from surgery to repair damage to his ankle, Goforth bested one of the most dominant teams in Pro Stock to collect his first Ironman since 2009 in only his third race of the season.

“It feels pretty good to win here today. It has been a struggle watching from the sidelines these past few months. It was great just to get behind the wheel again, but to win, that just makes it all the more special,” Goforth said. “When I had this surgery they told me I would be out 12 to 15 months, but the last time I went in my doctor said that I may just be the first person to get well in 10 months’ time. Now, here I am holding one of these.” 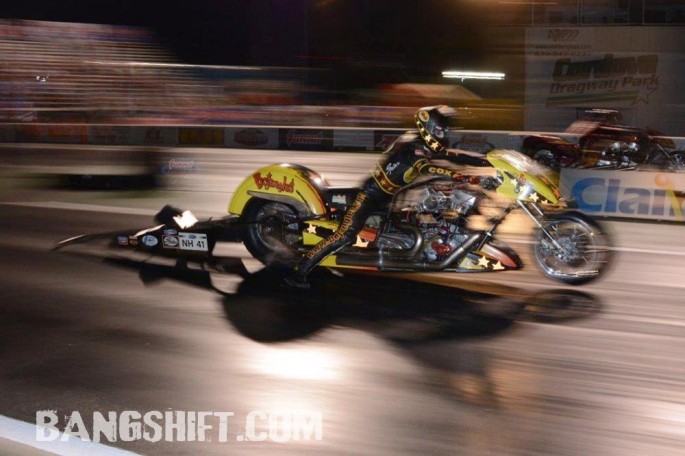 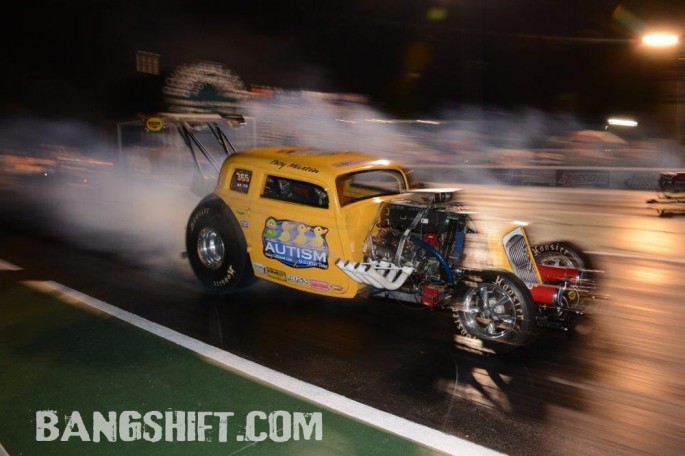 Goforth beat John DeFlorian Jr. in the finals of Pro Stock, running a 6.351 at 221.23 in the winning effort. DeFlorian drove the Black Diamond Motorsports Camaro to a 6.424 at 217.67 in finishing runner-up. Goforth added wins over teammate Todd Hoerner and Brad Waddle on his way to the win.

Mark Cox, from Wilkesboro, N.C., claimed his second win of the season in another exciting final in Nitro Harley over Larry Brancaccio. 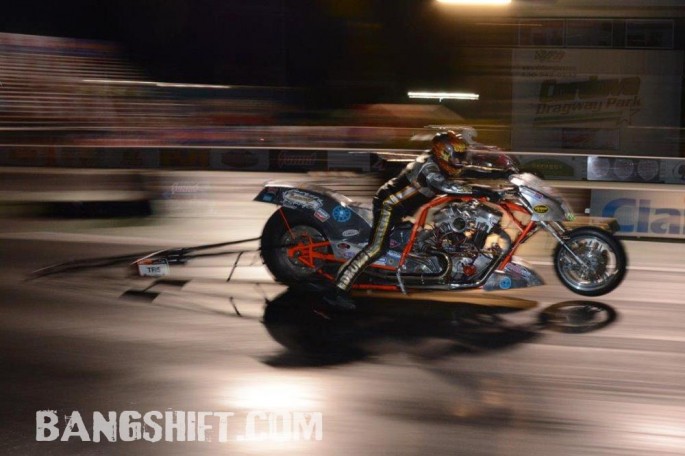 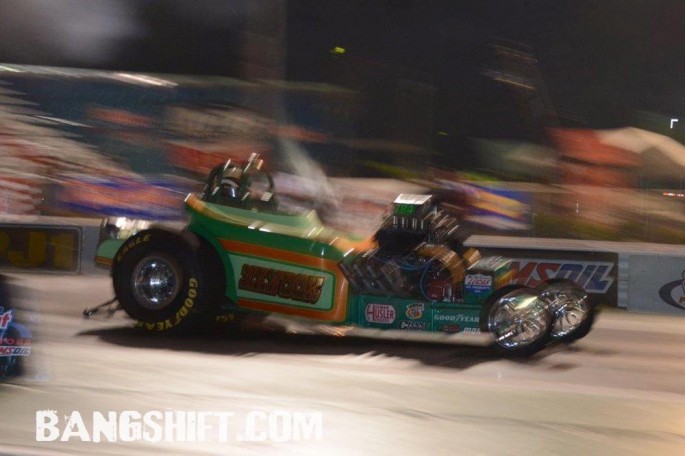 In Nitro Altered, Troy Martin won for the very first time in the nostalgia class, besting Kyle Hough (above) in a wild final. While Martin was busy coasting to a 6.811 at 167.45 to take the win, behind him Hough went up on two wheels, crossed the center stripe and lightly tagged the wall, handing the win by default to Martin.

Finally, in Jet Dragster Kat Moller collected her first career victory over Elaine Larsen, running a 5.836 at 274.72 in the final to Larsen’s 5.746 at 276.07. Top qualifier Marisha Falk turned on the red light during both of her passes on Saturday after a solid effort on Friday. 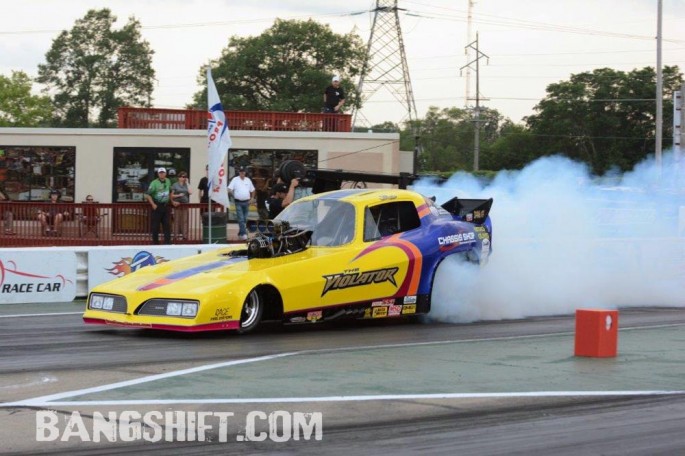 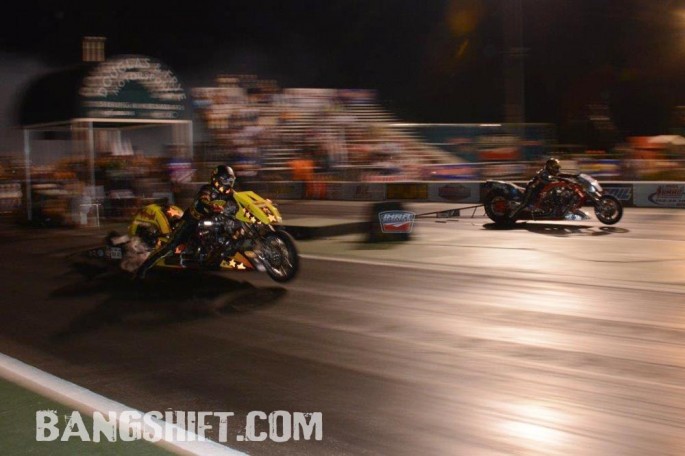 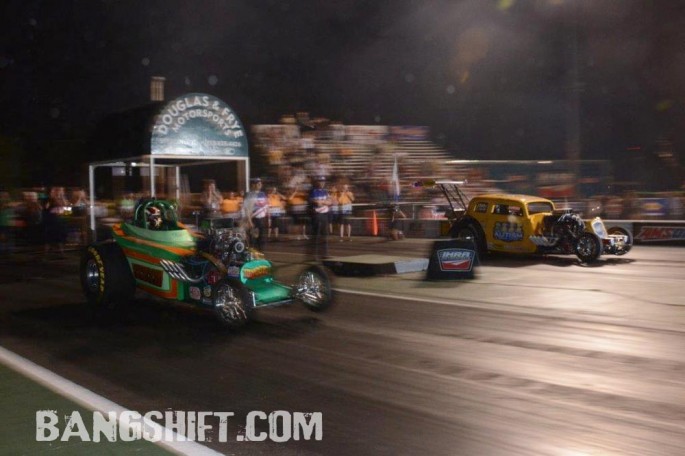 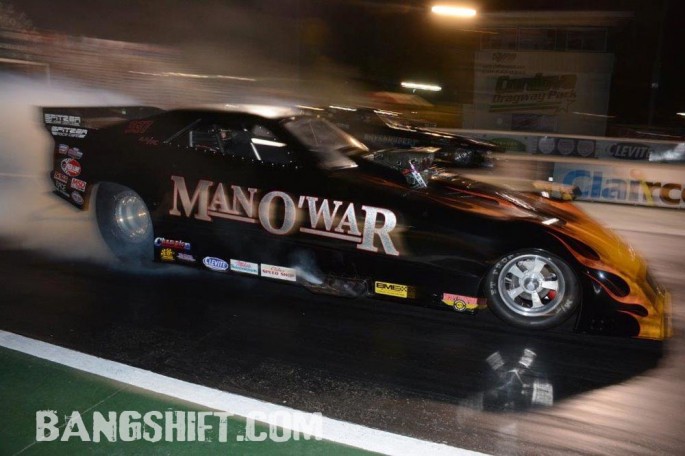 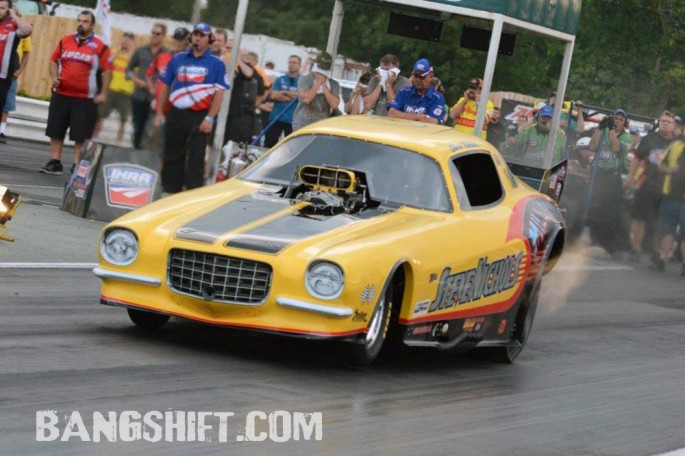 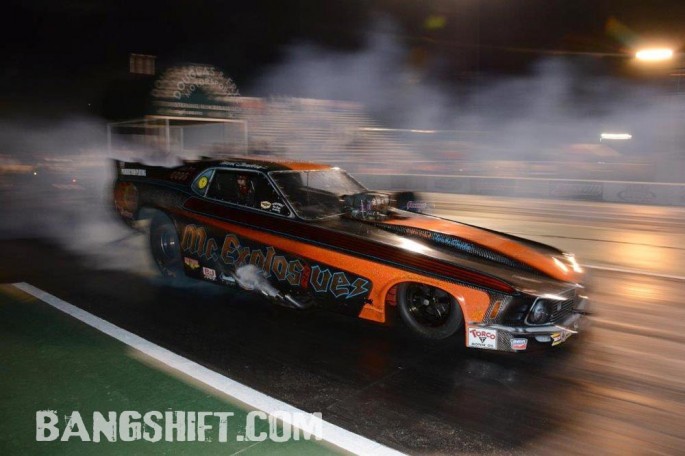 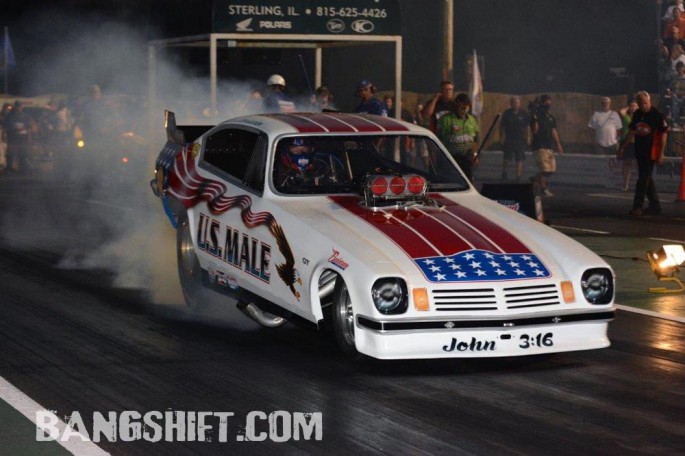 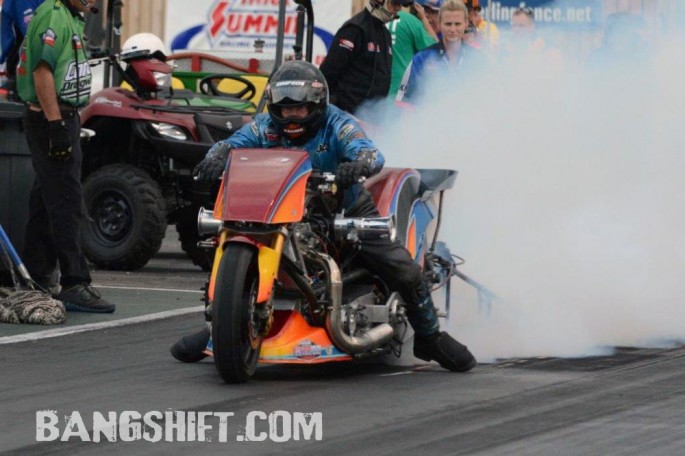 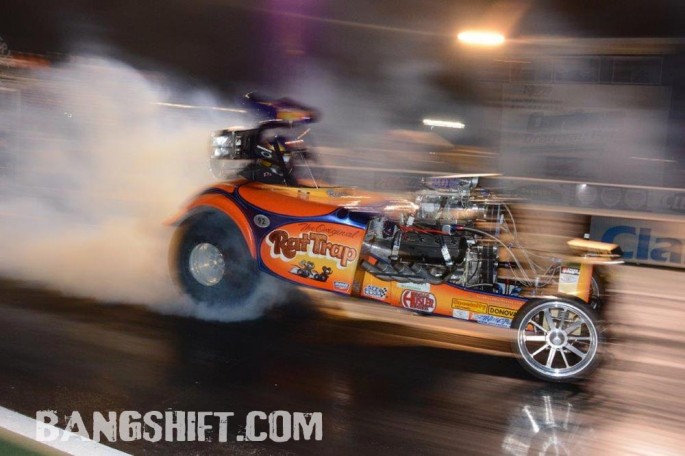 2014 Meltdown Drags Coverage: The Inside Story Of The Event And Another Load Of Awesome Photos Kustom King Car Auction Next Month Features 500+ Cool Resto Candidates And Parts Cars In Savable Shape - This Is Nuts!