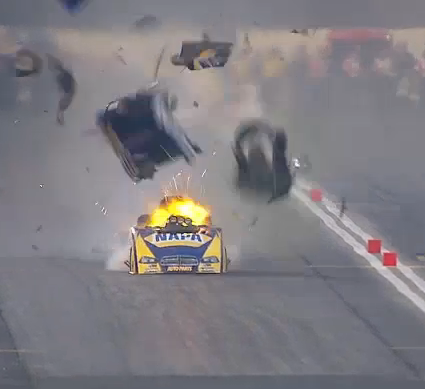 The Winternationals are on ever racer’s short list of events to win. Pomona, Gainesville, Indy, and a handful of other “majors” are the big races that punctuate championship seasons and successful careers. This collection of videos were all taken at various runnings of the NHRA Winternationals over the years and they feature nitro burning engines expiring in violent fashion and other wild stuff. Being that everyone is hopped up and ready to let fly for the new season, cars and drivers are all set on 11 in an attempt to grab the first Wally being awarded in any given year. That means pushing the equipment hard and maybe knocking a little rust off along the way. Testing is one thing but this is real deal game day stuff.

Some of these are recent and some are from a while back. They are all nasty and all of the drivers you’ll see below came away unscathed, except maybe for some ringing in their ears. Think anyone will make the 2015 NHRA highlight reel this weekend? History says that they will!

Centerforce Releases Twin Disc Clutch For Diesel Equipped Rams - Rated For 1,700 lb/ft Of Torque! Nutjob: Why I Care About The Focus RS And Why You Should Too

One thought on “Friday BOOM: A Collection Of Videos Featuring Funny Car Top Fuel, And Alky Dragster Wreckage At The NHRA Winternationals”