Friday KABOOM: Watch An A/Fuel Dragster Blow Up Like There’s A Nuclear Device Inside The Engine 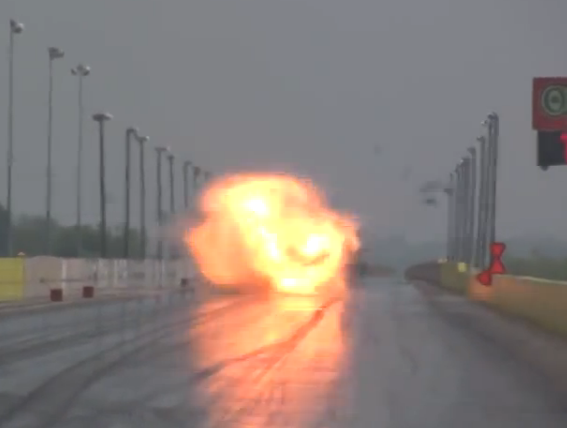 I’m thinking of starting a new recurring Friday blog item called simply, “Friday KABOOM”. Not to go too in-depth with you here, but these would largely consist of videos featuring things exploding violently. Someday, when BangShift is enshrined on the Internet list of historical web places perhaps the virtual plaque will have the words, “Home of Friday KABOOM” on it. We can only dream. The star of today’s boomer is NHRA sportsman stand out racer Aaron Tatum and his injected nitromethane A/Fuel dragster. I absolutely love A/fuel dragsters because there’s a “purity” to them when put next to a top fueler. Without the blower, we get to see how nitromethane acts as a fuel all on its own and that’s pretty neat.

There are marked differences between the engines in top fuel and a/fuel dragsters, the blower being one, the percentage of fuel they are allowed to burn being another, compression ratio, camshaft specs, operating RPM, all add up to make these cars far more unique then simply a top fuel car with the blower removed as some people perceive them. One thing that is the same though is that the engines require a massive torrent of fuel to make the prodigious power that they do. As many of you already know, nitro has oxygen in it and because of that, it can be burned in massive volume…or should we say “in theory” it can be burned in massive volume.

What appears to happen here on Tatum’s car is the worst case scenario for a nitro burning engine. If the spark goes out in a hole when one of these engines is being fire hosed with fuel, circumstances can present themselves in a scenario where a piston is coming up on the compression stroke only to meet a huge volume of fuel that doesn’t ignite. Since the laws of physics tell us that we can’t compress a liquid, things get really ugly, really fast. Rods break, blocks break, and then everything turns into flaming hell, if only for just a few seconds like in this video.

What’s interesting about this one is that there is no unburned fuel blowing out of the pipes, no signs of the engine laboring or running unevenly, just a clean run to about 1,000ft and then KABOOM. There’s big fire and parts flying everywhere for a second or two and then it subsides as the dragster goes through the traps. This didn’t slow Aaron Tatum down much, the guy has been and continues to be a terror in NHRA’s Division Four area and his team learned from this boomer and stuck the next engine in it then hit the track again. Such is the nature of contending with the most exotic racing fuel on the planet.

(Skip to 1:00 in if you want to rush things or enjoy the burnout and awesome cackle of the car on a high percentage of nitro)

6 thoughts on “Friday KABOOM: Watch An A/Fuel Dragster Blow Up Like There’s A Nuclear Device Inside The Engine”