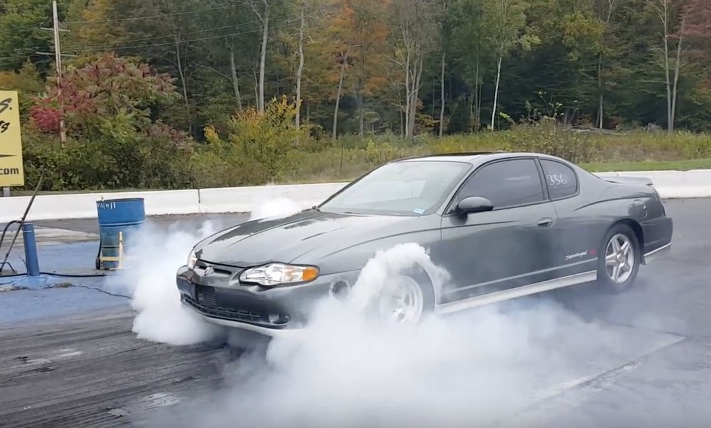 I’ve owned a lot of cars over the years, but the list of cars I miss that I would have again is rather short. One of the top pics would be the LS4-powered Monte Carlo SS that I ran ragged for years. I put tens of thousands of miles road-tripping the car across the country, I autocrossed the hell out of the understeering wonder whenever I could, and if there was a dragstrip, I was on it. I became a fan of GM W-bodies with a supercharged Regal, but the Monte made me a fan of LS power…it was flawless, whether it was barking shifts on the quarter mile or running Autobahn-like speeds across Montana. For a big coupe, it was fun and I would have another if the opportunity presented itself.

Keen-eyed readers will note that the Monte Carlo you see here did not come with the LS4, and that’s correct: only the 2006-07 Monte Carlo SS got the V8. The 2005 Monte Carlo you see here would have left the factory with, at best, the supercharged 3.8L V6. This beast is the product of Furches Performance, and to say it’s stout is an understatement. The 5.3L V8 is running a single turbocharger and the glass-jawed 4T65E-HD transaxle was ditched in favor of a 4T80E that would have backed a Pontiac Grand Prix GXP or a Northstar-powered Cadillac. I recently took a bunch of heat about trying to be creative with “hot-rod jellybeans on wheels”, but when this Monte Carlo shuts you down with an 11.07 quarter-mile run in the 130-mph range, don’t cry to anyone but yourself. This Monte is, without question, BangShift approved!

Mark Rebilas Has Published His Best Of 2015 Crash And Burn Photos - Must See! Winter Rally Madness: The Action And Carnage From The Jari-Pekka Junior WRC Rally In Finland