Best of BangShift 2015: A Live Interview As An ECTA Racer “Speeds” Down The Track On A 50cc Sidecar Motorcycle 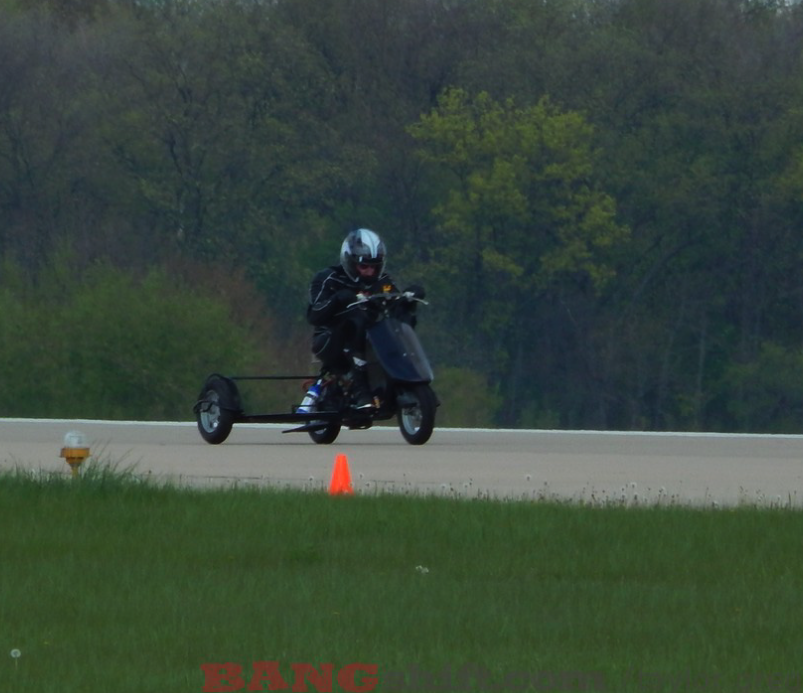 (Photo by Doug Gregory/Video by Steve Murphree) – There’s no reason to go racing if you aren’t having any fun, right? That cuts both ways. It is fun for the racers and it is fun for the people operating the event (most of the time). Those two worlds of fun collided in epic fashion during the May 2015 Ohio Mile meet and the results were a 42mph run, a live interview, and one of the more humorous things I have ever been involved with as an announcer.

The machine you see in the lead photo of the story is the 50cc “sidecar” motorcycle of Daryl White. While that may look like an outrigger, it actually qualifies as a sidecar by the definition of the land speed racing rules that we compete under. The record was wide open and White decided that he wanted to etch his name into the books with the slowest speed in the book (for now!). His ultimate performance was a 46mph zip down the mile which got him the class record but the real fun came later on. Oh, it is currently the slowest record in the book!

On this run, Dave Kixmiller and Kris Henderson hooked White up with a helmet that has a radio and microphone, I had a walkie talkie in the tower and began to communicate with Daryl as he charged down the last half mile of the course. I got him in range and what you are going to hear below is the radio transmission of our history making broadcast. Did I mention that the thing had nitrous on it? Yeah, it did and that may be the best part of the whole program.

Enjoy! We sure did.

PRESS PLAY BELOW TO SEE THIS HISTORIC AND HILARIOUS MOMENT  –

Best Of BS 2015: The Car Bros Are Back With A Hilarious Look At Japanese Car Culture Shot On Location In Japan Caption This: Somehow, Some Way, This Has To Be Rebeldryver's Fault.

2 thoughts on “Best of BangShift 2015: A Live Interview As An ECTA Racer “Speeds” Down The Track On A 50cc Sidecar Motorcycle”