Gap Jumper: Watch The Spark From An MSD ProMag 44 Clear 2-inches Of Distance And Even Beat The Wind 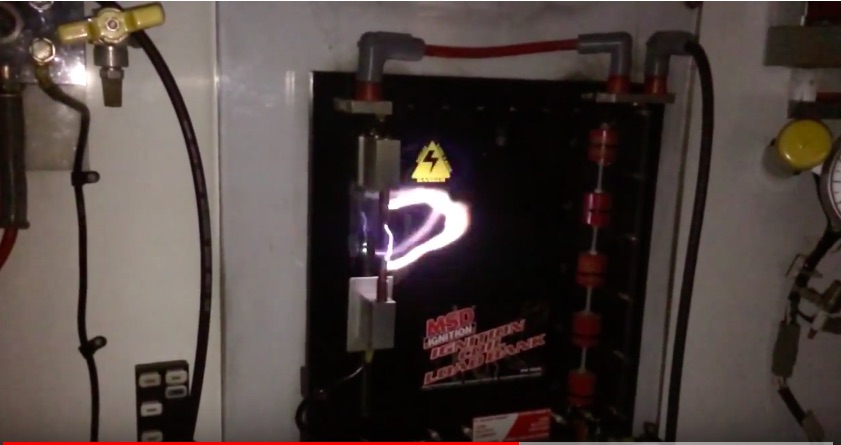 Oh all the ridiculous parts of a top fuel dragster, the ignition is right there at the top. With massive fuel volumes cursing through the engine, the spark plugs are working in an environment where they are basically being drenched with nitro at all times. The addition of a second spark plug to the chamber to help with ignition was a breakthrough, the addition of a third spark plug to the chamber by Dale Armstrong was banned. So with two plugs per chamber and two massively powerful MSD ProMag 44 magnetos generating electricity, what does it all look like? You’ve seen the outside of the engine with the 16-plug wires everywhere but what about the intensity of the spark that is being sent to the plugs, what does that 44 amp stream of electrons look like? Well it looks like something out of a display at a science museum as evidenced below.

You are going to see how powerful it is by watching what seems to be a captured lightning bolt thrown by Zeus himself. Basically the mag is being spun and you are going to watch its output jump a two inch gap. You are also going to see how strong the spark is when it is faced with wind trying to blow it out. It moves and stretches and finds a way home. The video is shot in slow motion which is cool because this would not be as impressive looking in real time.

The truly stunning thing is that despite all of this. Despite this happening TWICE per cylinder with two plugs, that “dropping holes” is one of the most persistent and vexing problems a nitro team has. A dropped hole is very bad because the engine loses 1/8th its power but it is also a recipe for disaster when the cylinder is filling up with liquid that is not igniting and burning, opening the door to a potential liquid compression attempt every time the piston comes up in the bore. Eventually that leads to major league destruction. Not good!

Press play below and see the lightning jump a gap, lightning created by a ProMag 44 –

The Bad Guys: This Video About The Worst Sponsors, Owners, and Promoters In NASCAR History Is Wild Going BIG: This Profile Of The Komatsu D575A-3 Super Dozer Shows Off The World's Largest Bulldozer