Going BIG: This Profile Of The Komatsu D575A-3 Super Dozer Shows Off The World’s Largest Bulldozer 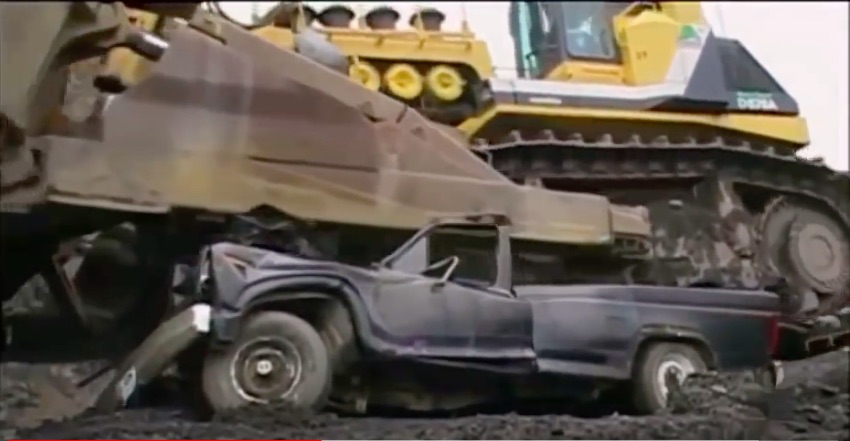 This thing may have the worst power to weight ratio we have ever featured on BangShift but that’s not a really relevant stat. Why? When a machine makes more than 1,100hp it is impressive. When that vehicle weighs 336,000lbs, it is just plain awesome. Meet the Komatsu D575A-3 Super Dozer. This is the largest production bulldozer in the world and it has been in production since 1991. Built by the Komastu company this is a machine designed to be used in massive open mines to move material and keep the operation running. With the right blade this monster can push 125 cubic yards of material. That’s a wall of dirt that is not easily described but when you know that it is basically capable of pushing its own weight through the Earth you start to see the picture.

The huge size of the dozer means that if it needs to be moved significant distances it gets disassembled and moved in 6-8 tractor trailer loads. Machines like this one are a far cry from the old, open operator style cable dozers that were the standard for many years. Advancements in technology have seen blade designs change substantially, they have seen power levels rise, and perhaps more importantly to the guy inside, they have seen operator comfort revolutionized. We are not saying that it is an easy day at the office operating one of these beasts but we are saying that when the operator is done for the day he or she does not feel like they have been beaten with hammers in a soot filled chamber.

The engine is a 12-cylinder turbodiesel that has a bore and stroke of right around 6.75″ square. That means the engine comes in at right about 3,000ci. No small block for sure! The machine stands some 16′ tall and 38′ long. One of the great stats is the fact that because of its tracks the Komatsu is only pressing on the ground with about 23lbs of pressure per square inch. Wild, right?

Video: A Mustang, A Firebird, and An RV Walk Into A Tuff Truck Competition And All Race! This Rad Vintage GMC Prerunner Is An Epic Use Of Suspension, Wrapped In Attitude, And Powered By A Blown Small Block.