Gasser Eye View! Ride Along With Steve Crook In The Blown Blew By You 1955 Chevy – This Rules! 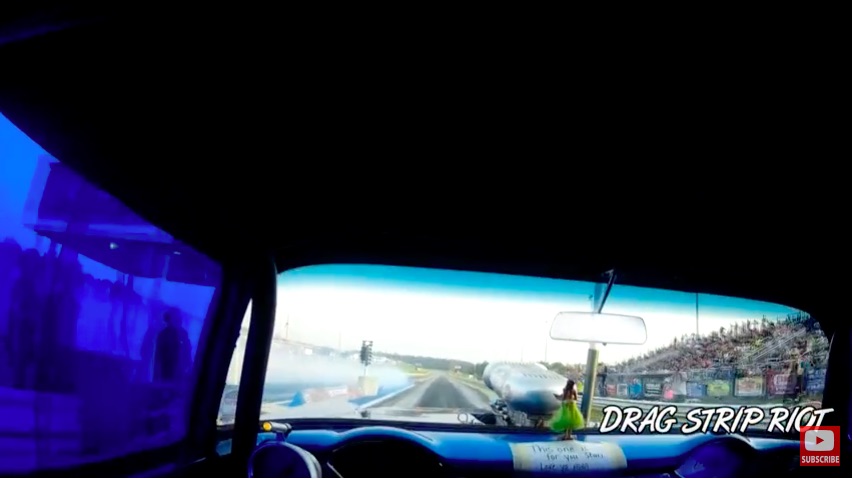 Drag Racing is kind of interesting because of how fractured and broken up the sport is. I don’t say that in the negative way, in fact quite the opposite! These days there are classes, events, and opportunities for fans of every stripe to see exactly what they want at the strip. Some people favor the exhibition type cars like jets and wheel standers, some favor the hardcore professional competition of top fuel and many, many others love machines like the one you are about to watch. We’re going to take a ride with Steve Crook in the blown Blew By You 19565Chevy that competes with the Scott Rods AA/Gasser group. That group and Steve’s car are not strangers to BangShift. They put on a great show and people love there blown antics. As fun as they are outside of the car, watching this run from a helmet cam shows that they are even more fun INSIDE it.

It isn’t that the car is all sideways, rowdy and crossed up on this pass it is just a great race with a fellow competitor in a bad ass car. The sound that the blown motor in Crook’s car makes will have the hair on the back of your next standing up, especially during the long, high RPM burnout.

Like virtually every other drag racer in the country, Crook is on a winter hiatus, hopefully tweaking on his beloved gasser and getting it ready for another season of fun in 2020. This group has been together for more than a couple of years now and we have seen them everywhere from match races to running four wide at the NHRA event in Charlotte. Awesome!

Watch The 1990 IHRA Winternationals Here - Big Names, Big Engines, And The 20th Anniversary Of The Organization BangShift Question Of The Day: What Is The Origin Story Of Your Dream Machine?