Gearhead Video: The Story And Cool Tech Behind The Arias/Fontana Hemi – Chevy Block With Hemi Heads On Nitro! 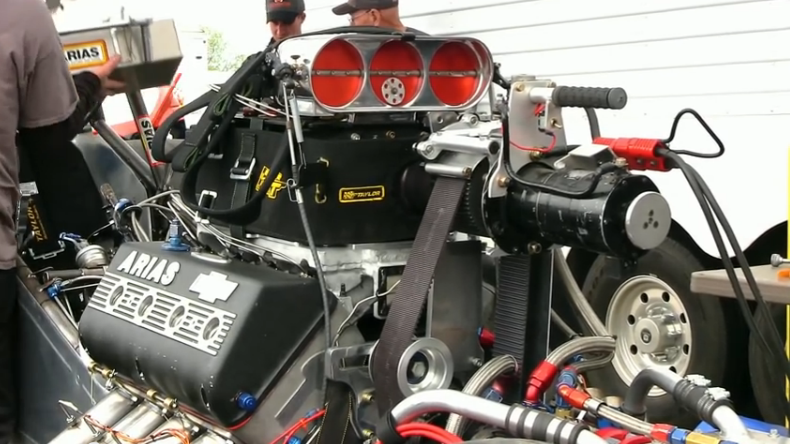 We love guys that take the unique path in racing. They are typically the ones that aren’t afraid to experiment or stick their neck out a little further in an effort to learn and potentially gain a leg up on the competition. A couple of years ago in the world of nitro racing Smokey Alleman was that guy when he showed up to the march meet with an Arias Hemi powered dragster. Basically a Chevy block with hemi heads on nitro, this is awesome.

It was the only car in the field not running an early or late Chrysler style hemi engine and it got Nitro America’s Les Mayhew’s attention as well because he caught up with Smokey Alleman to get the story on the engine. The voice you’ll hear asking Smokey questions is none other than Cole Coonce. Cole asks Smokey some great questions and he gives some equally great answers, especially to the last question thrown at him.

There are some important things to understand about the engine that we didn’t even consider before hearing Alleman talk about it. The first is that this is NOT an Arias 10-liter like those found in pulling tractors, boats, or other race cars. This is an old school Arias hemi that uses the same bore spacing as an actual big block Chevy. Rules state that a big block Chevy style head gasket must be used and Smokey tells Mayhew and Coonce that he’s running a cast (high performance) block to anchor the engine. He’s worked on the oiling system, reworked the intake manifold, and applied lots of other tried and true hot rodding tricks to this very powerful engine. It has been a very long time (we believe) since anyone has really put an effort forth in making one of these engines truly competitive in the nitro world. As this is a fresh effort, the car was not laying down world class elapsed times at Bakersfield but it was getting down the track and that’s job #1 at this point in the game.

We give Smokey Alleman all the credit in the world for taking this path and thanks to Coonce and Mayhew for having the presence of mind to make this video and delve into the awesome world of the Arias hemi engine!

Get The Edelbrock Flow! Buy An Edelbrock Water Pump Between July 1 and Aug 31 For A Rebate and Gift! BangShifty Exercise Video: One Guy, Two Tractors, And High Stakes Bump Starting Is Good Cardio!

6 thoughts on “Gearhead Video: The Story And Cool Tech Behind The Arias/Fontana Hemi – Chevy Block With Hemi Heads On Nitro!”