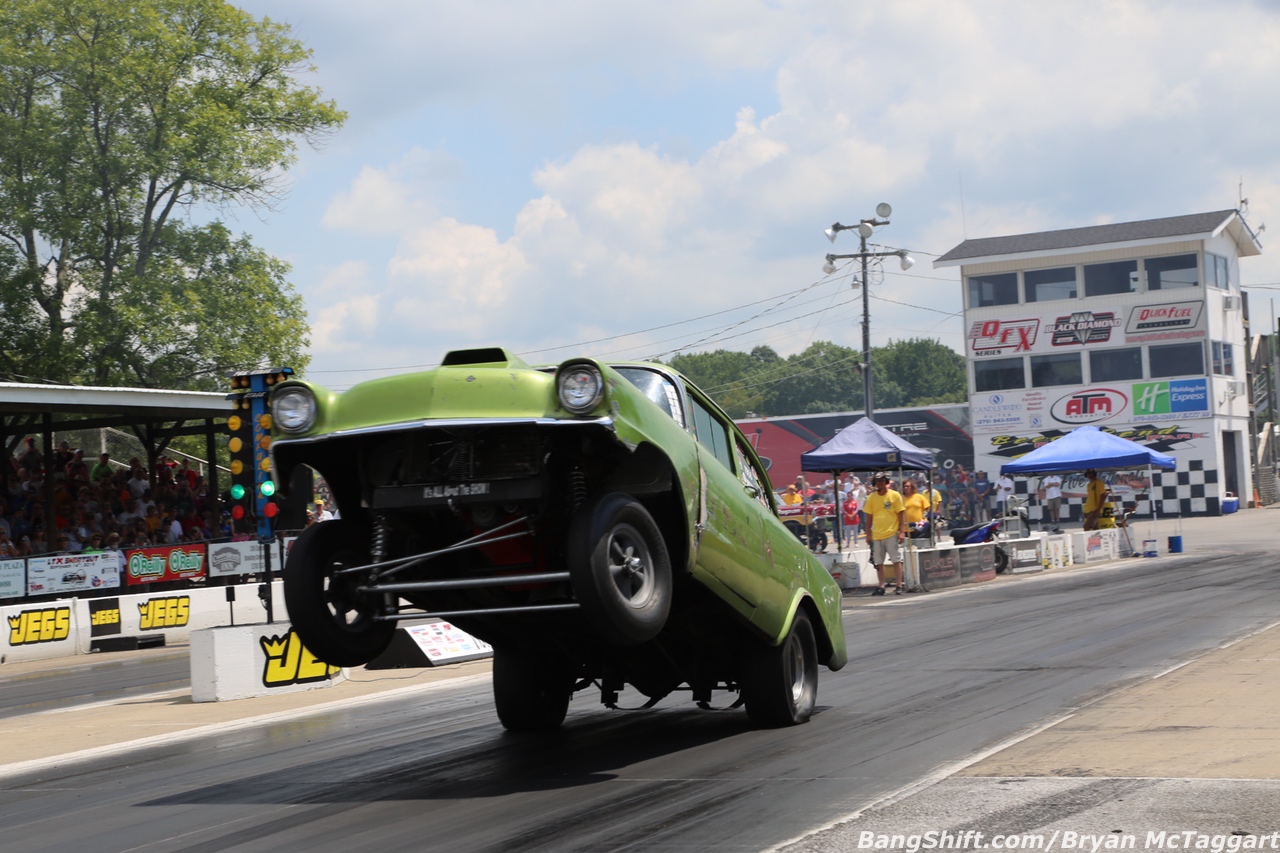 When photographing on the dragstrip, we tend to look for a sure bet car. We want that action shot. We want the half-track burnout with Space Shuttle launch levels of tire smoke trailing behind. We want that wrinkled-up tire shot as a car digs in for the launch when the lights come down. We want crossed-up burnouts with the butterflies on the blower hat wide-freaking-open and we want the wheels hanging high in the air. Over the years, we’ve come to know which cars put on a good show. Doug Duell’s “Drag’n Wagon” Plymouth was my go-to for the first couple of years I shot photos for BangShift…in fact, it was my first wheelie shot ever…but I quickly learned that this green 1956 Chevrolet was the car to really pay attention to. I first saw the car at the 2014 Holley Hot Rod Reunion as it got it’s now trademark wall rash on the driver’s side of the body, and ever since, when the Chevy is on the track, you’d better believe I’m right there. I might not be shooting a photo but I know that Mike Bilina is hell-bent on putting on a show for anyone in the seats. 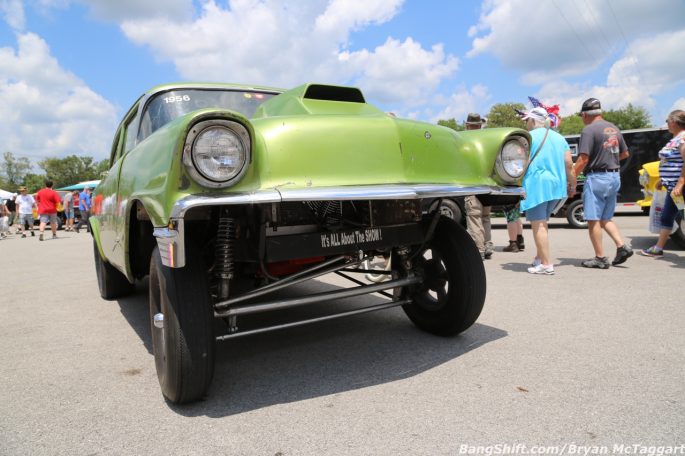 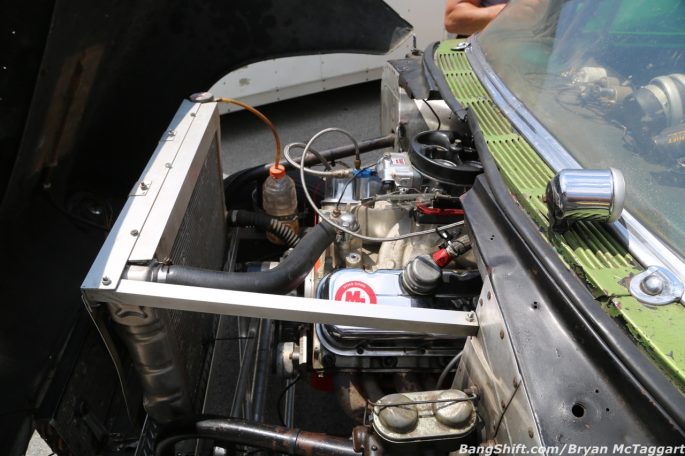 So what’s the story behind this skyward-bound shoebox? The car has actually been in this condition since 1965, with the exception of a fuel cell replacing the “beer keg” fuel tank. Those magnesium wheels? Been on the car forever. The green-tinted windows? Yep, you guessed it. From the straight axle up front with no brakes to the cut-back location of the engine, it’s as it was back in the day. Speaking of that engine, it’s a 496ci Rat under the hood that is connected to an automatic transmission and onto an Oldsmobile rear axle with 4.30 gears. It’s as simple as that. Other than the fiberglass tilt nose, the doors and the trunklid, it’s 1956 Chevrolet or it’s purpose-built for hell-raising. It’s like a sledgehammer…simple and effective. 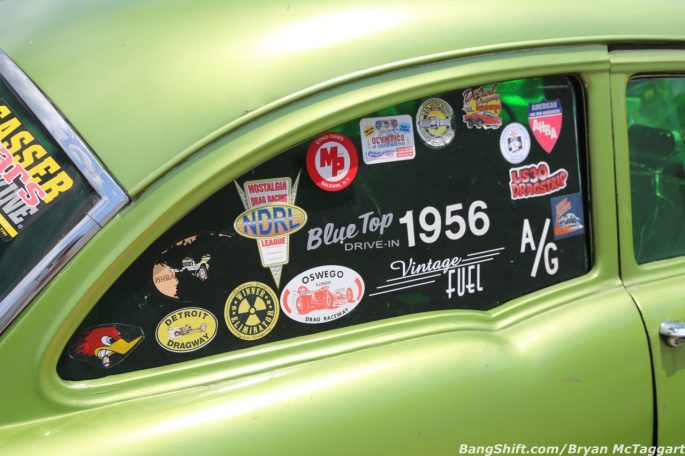 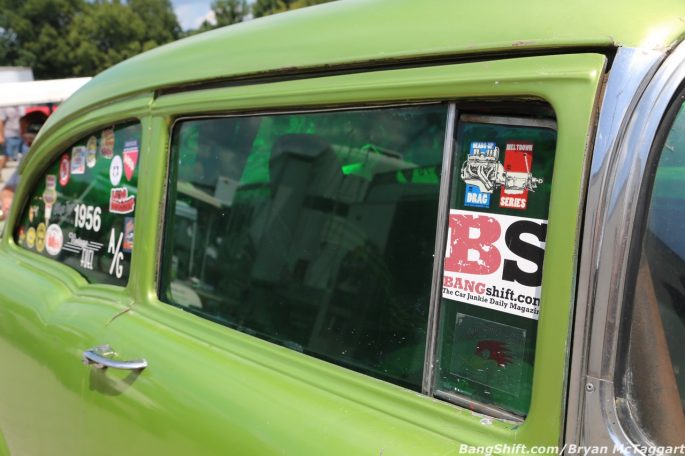 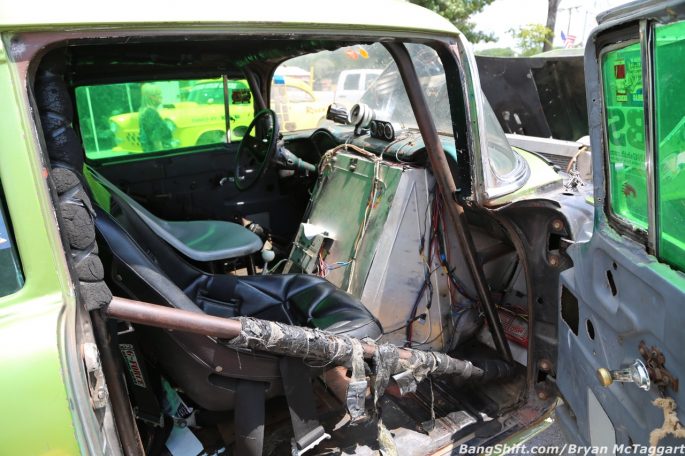 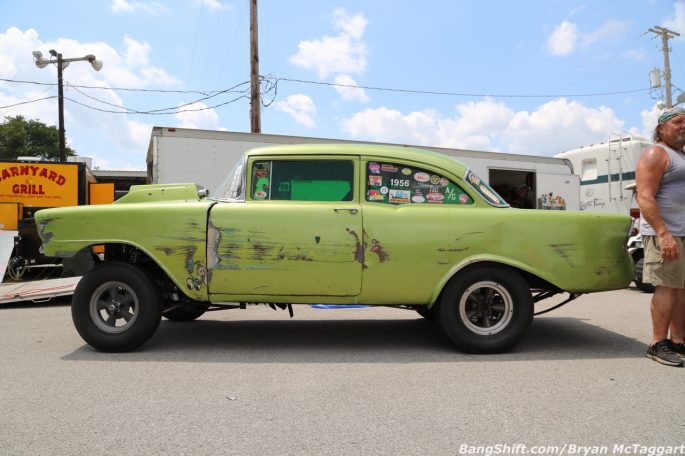 If you look at the first crossmember right where a front bumper would normally be, you will see Bilina’s mantra: “It’s ALL about the SHOW!” And without question, there will be a show whenever the green Chevy rolls up into the waterbox. You don’t even have to wait for the actual race itself…his dry-hop launches are just as wild and just as high up in the air. Some will wince that a classic Chevy is being treated in such a manner, but the amount of people jammed in the seats and along Beech Bend’s fenceline to watch the show says that this car needs to remain in action just the way it is. When the car is sitting in the pits, there are crowds of folk looking it over, chatting Bilina up, and generally jaw-dropped that they got to see this car in action. It’s not the fastest thing out there (mid-10s are it’s normal range) but it’s got more showmanship than P.T. Barnum in his prime. Give the audience what they want and they will always come back for more. 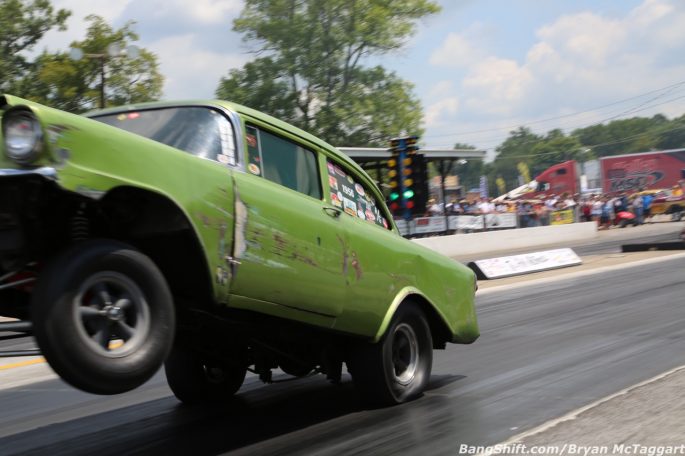 Best of 2019: Watch What Happens When The Rear Axle Effectively Rips Out Of A Brazilian Drag Chevette Best of 2019: This 1976 Film Promoting The IMSA Monza Race Car Is Awesome! 1970s Road Racing Greatness