Hang ‘Em High: Watch This Skyline Go Straight For The Moon In Qatar! 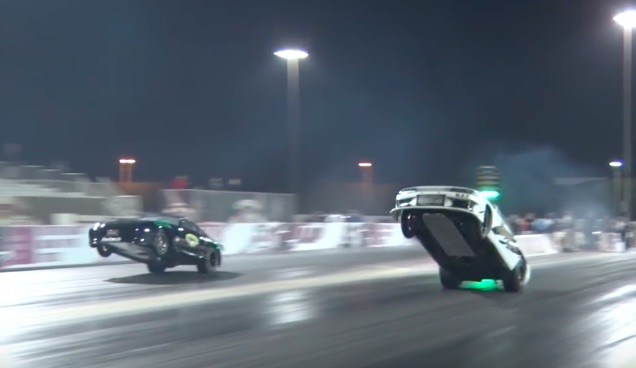 Heavy-hitter turbocharger cars are usually pretty modest off of the line. They take off at a healthy boost, and a little ways down the track, the rest of the boost kicks on, allowing for power-wheelies halfway down the strip that are the stuff of legends. Usually. There are some that like all of the boost all at once and only dial back to make sure that the tires can handle the shock at launch. Case in point is this drag-prepared Nissan Skyline R-32 that Kyle from 1320Video found on his latest trip to the United Arab Emirates. The Skyline competes in a class where wheelie bars aren’t permitted, and like most drag-prepped Nissans we’ve seen that are still six-cylinder powered, there is one honkin’ turbo that is force-feeding the engine as much as it can take. And the car’s got the traction part down so when the boost comes on, it’s not the gauge that climbs up so much as it’s the front end. The driver’s pretty calm about it too, suggestion that the GT-R has done this to him a time or two. It takes a pro to remain that calm after looking towards space for a few seconds while traveling down the strip. That, or the guy is just plain nuts. Whatever works, we guess.

Watch The Most Insane Giant Vise You Have Ever Seen, Get Built By Fireball Tools Classic YouTube: The Car And Track Test Of The 1971 Ford Torino GT 429 Cobra Jet!