Watch The Most Insane Giant Vise You Have Ever Seen, Get Built By Fireball Tools 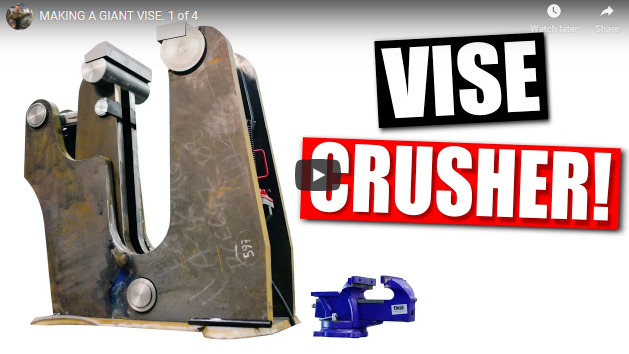 I’ve talked about Fireball Tools in the past and am a firm believer in their products. I only own a couple of their squares, but have been following their other products for years and have seen some in practice in person and online. I most certainly hope to have some in my new fab shop when it is done. But one of the things I find most entertaining and awesome about Fireball Tools is that the owner, Jason Marburger was “just” a welder looking for better stuff to do jobs with and that became a passion for more and more. Now Fireball is it’s own machine shop and custom fabrication facility with all kinds of insanely fun tools both old and new. Some of them are huge scale stuff and some are super old and have been restored by Jason. He’s a fan of making his own stuff, has lots of projects you can build yourself at home with his plans, and often designs new things that will do jobs he comes across in the shop.

One of those things is this giant vise. We’re talking huge. And we’re talking all custom designed by Jason to do the jobs he wants. But this giant vise can’t just be a tool, it has to be a pretty and functional tool. When this thing is done it is show quality, and during the build you’ll find Jason has even more skills than you might have already thought. He pinstripes?! Yep, he pinstripes.

Watch, become a fan, and be inspired. That’s what this one is all about.

CLICK HERE TO SEE WHAT ALL FIREBALL TOOLS HAS TO OFFER

The Jester Hits Home: This Guy's Idea To Make Formula 1 Racing Worth Watching Is Genius Hang 'Em High: Watch This Skyline Go Straight For The Moon In Qatar!

4 thoughts on “Watch The Most Insane Giant Vise You Have Ever Seen, Get Built By Fireball Tools”