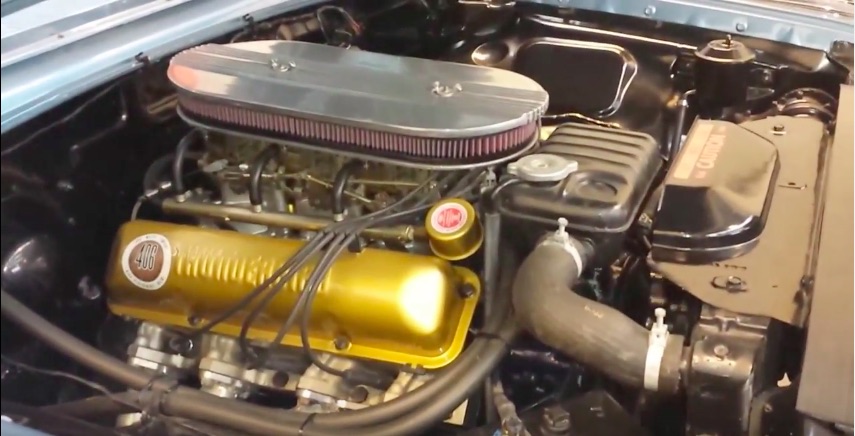 No, we’re not going to be talking about stroker Chevy small blocks today! We’re going to one of the shortest lived but potent members of the expansive Ford FE big block family in the form of the 406ci engine that showed up in 1962 and was pretty much gone by 1964 as it was supplanted by the mighty 427. The 406 was the way that Ford got from the 390ci engine that was its main big block workhorse thought the 1960s to the 427 (and later 428) which were the high line performance engines at Ford during the Total Performance era.

Basically it was a bore change that took the 390 to 406ci. In 1962 the 390 block was expanded by .080 per hole from 4.05″ to 4.13″. The stroke remained the same as the 390 engine. The 390 block was plenty strong enough to stand up to the requirements that engineers were looking for out of the 406. The deeply skirted block was good as were the revised oil galleries. Just before the engine was replaced by the 427 there were versions that had cross-bolted main caps. Very few of those engines are kicking around today and there’s no real record that we could find to denote how many were made.

The heads on the 406 were better breathing than those on the 390 by way of larger valves. The 406 has 2.09 intake valves and 1.66 exhaust. The rocker ratio was also steeper at 1.76. Our favorite part of these engines back in the day was the compression ratio. How about 11.4:1 for the tamer version and a reported 12.1:1 for the 405hp version! Single four barrel variants of the engine were rated at 385hp and the killer tri-carb equipped 406 carried the 405hp rating.

These engines had the suds to keep up with the stuff that was being shoved out by the other companies in the early 1960s but the cars they were being installed into were not helping the Ford performance cause. Not that they were ugly but they were heavy in comparison to other stuff so the early 1960s Fords do not have the shining reputation that the Pontiacs and Mopars did.

Happy 4/06! One of our favorite under appreciated big blocks ever.

European Banger Racing Is Like A High Speed Demolition Derby From Hades - Insane Video This 1968 Chevrolet C-10 Pickup Is Grandpa Perfect, Has All The Original Paperwork, And Would Be A Bitchin Driver As Is.